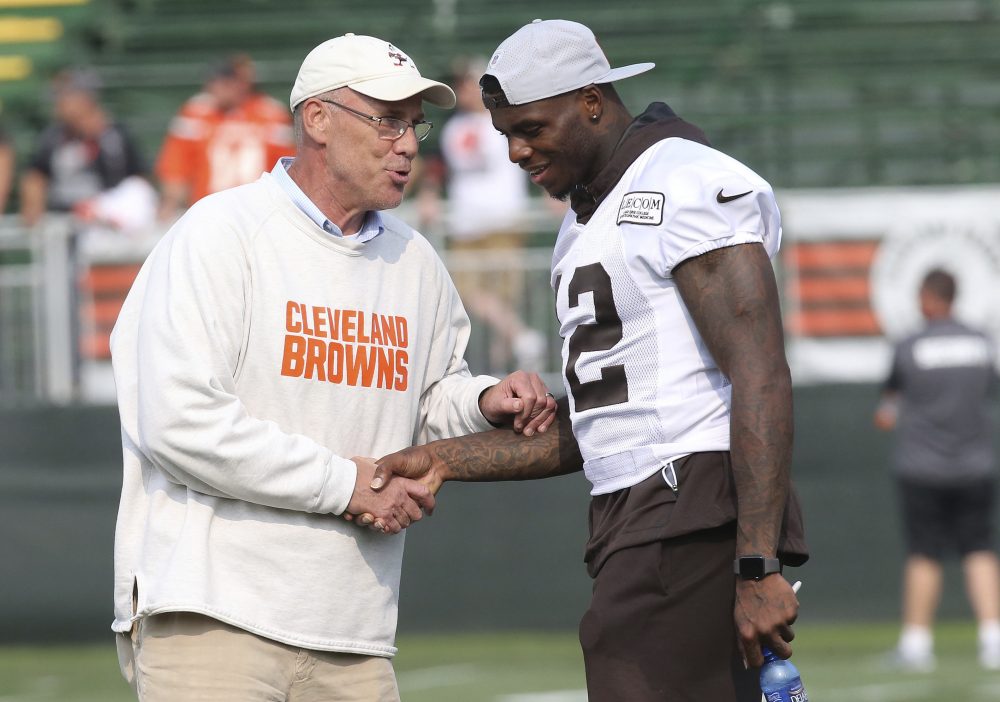 John Dorsey arrived in time to see the final four losses of the 0-16 season. When the carnage was complete, he and coach Hue Jackson sat down to assess the roster Dorsey inherited from Sashi Brown.

“I call it the circle game,” Dorsey told The Chronicle-Telegram on Tuesday.

Dorsey went through the same exercise in his previous general manager job in Kansas City with coach Andy Reid. The objective is to look at every player and determine where upgrades are necessary.

The Browns’ roster had more circles than a pair of polka dot pajamas.


Dorsey wasn’t deterred. He had already realized the lack of “real” players acquired by Brown and faced a similarly expansive rebuilding project with the Chiefs that ended with 43 wins and three playoff appearances in his four years.

“Then you go attack that and you try to improve competition at each one of those positions,” Dorsey said.

When he says attack, he means attack. The organizational plan put in place in January featured a search for talent that left no stone unturned.

When the 53-man roster was set Sunday, 31 of the players were new since the end of only the second 0-16 season in NFL history. He made 13 trades, 10 significant free agent signings, nine draft picks and dozens of minor transactions.

Dorsey said the turnover in his first year in Kansas City in 2013 was similar following a 2-14 season. He acknowledged the Browns’ 1-15 record in 2016, lack of a winning season since 2007 and absence from the playoffs since 2002 add to the challenge.

“It’s magnified,” he said, wearing his standard plain gray sweatshirt and Brownie the Elf cap. “And I look at the fan base and I look at the franchise itself and to me this is one of those iconic franchises. You can build a team, but I want to build a program. I want this thing to sustain for a decade. That’s part of the mindset in doing a plan like this.”

Dorsey sat in his office that overlooks the practice fields just days away from watching his collection of talent play a game that counts for the first time. An old Browns helmet — the orange wasn’t as orange — and a box of Extra Winterfresh were displayed prominently.

He added nine starters and five other key contributors in the offseason, not including No. 1 pick and Heisman Trophy-winning quarterback Baker Mayfield. The vibe around the team has changed 180 degrees.

“I like how the players have bought into the coaches, and guys are genuinely excited and you can feel the energy in the building,” Dorsey said. “All in all, I’m pretty excited.”

Moving on
While 0-16 won’t ever completely go away, the Browns have done their best to leave it in the past. Jackson’s plunge into Lake Erie served as an organizational cleansing and he is reticent when asked to reflect on the season.

“Honestly, I would rather not look back,” he said. “I just feel really good about this group.

“This isn’t the team that was 0-16. I know everybody wants to refer to it all the time and bring it up about this, that and the other. This is a different football team.”

It certainly looked new and improved through the preseason. The first-team defense was dominant for stretches in Year 2 under coordinator Gregg Williams and allowed only a field goal on the first possession of the opener. The starting offense, led by new quarterback Tyrod Taylor, showed the ability to pass and run successfully, although not often in the same game.

Taylor was one of Dorsey’s first acquisitions as he determined an established presence at the game’s most important position was mandatory. Since his arrival, Dorsey has been adamant the Browns will be able to compete in the AFC North starting in 2018.

“I think this team will be competitive in every game and rightfully so,” he said. “I’m the eternal optimist and I expect us to win every game. But realistic to know there are certain things that come during the course of a game that then you begin to see what kind of team you have.

“Who steps up in certain critical points? In any adverse moment, are they strong enough as a group with the same mindset to say, ‘We’re winning this game’? Once you see that then you know you’ve got a team.”

For the fans who don’t try to rationalize the failed tenure of Brown, the former head of football operations, Dorsey represents a welcome change in organizational philosophy. It’s not in his DNA to punt on a season in the name of a multiyear rebuild.

“No. Because there’s only one thing that you play the game of football to do, and that’s to win,” he said. “That’s the only thing I’ve ever known.”

The commitment to win now was reaffirmed throughout the preseason as Dorsey traded former first-round receiver Corey Coleman, considered signing receiver Dez Bryant and made a call to the Raiders about trading for defensive end Khalil Mack.

“I think that is the urgency, period — we want to win,” Jackson said. “Every decision that we make as we go about this is about winning and trying to put the best football team on the field for our fans and for our organization. There are no other hidden agendas for anything.”

No one is worried about another winless season, but some of the returning players want to use it as a reference point.

“It drives me a little bit, because I’ll never let something like that happen again,” defensive end Myles Garrett said. “No matter how long I’m here, there will never be a season like that.

“Everybody else has that same mentality. They think we can have a winning record, and I believe we can, too. We have to go out and prove it.”

Big talk
Receiver Jarvis Landry and linebacker Christian Kirksey didn’t stop at a winning season. Landry has brought up making a Super Bowl run on multiple occasions, and Kirksey doubled down on an offseason playoff prediction.

“Everybody starts the year at 0-0, and only one team wins the championship,” said Landry, acquired from Miami. “I’m not trying to give predictions or make predictions. I’m just saying that I think if we play to our full potential, every guy plays to his full potential, we have a great chance of making the playoffs, and even going further.”

Kirksey was the emotional leader of the team last year, trying to lift spirits despite the negativity that accompanies losing. Kirksey’s optimism tank was refilled in the offseason, and Landry brought confidence hard to find in a winless locker room.

Dorsey made significant changes at every position, none more sweeping than at quarterback. DeShone Kizer, Kevin Hogan and Cody Kessler were traded and Taylor, Mayfield and veteran Drew Stanton were added.

The perceived upgrades across the roster should give the Browns the chance to have a balanced, versatile offense and an attacking, playmaking defense. Despite his work, Dorsey declined to join the players with a bold prediction.

“Swivel around, look up on that grease board. That’s the only thing I care about,” he said, referring to a small note in the corner talking about going 1-0 this week.

That’s as far as offensive lineman Joel Bitonio wants to look into the future. He loves his teammates’ confidence but has seen bluster turn into disaster in his four-plus years.

“I think we can go out there and beat anybody, but I want to see it,” he said. “I’m ready for Week 1 against Pittsburgh. We’ve gotta win some f—— games before we talk about playoffs and things like that.”

Wait and see
Dorsey and owners Jimmy Haslam and Dee Haslam didn’t play the circle game with Jackson, whose 1-31 record in two years is the worst stretch for a coach in NFL history.

Despite the record and pleas from the fans, the Haslams determined no change was needed. They pinned the blame on Brown and attached Dorsey to Jackson.

“I think our commitment to him has been unwavering and still is,” Jimmy Haslam said of Jackson at the beginning of camp. He then noted the improved roster. “I think we’ll see the real Hue Jackson.”

Dorsey said he was impressed by how hard the team played in the final four games last year and that his partnership with Jackson has grown in his nine months on the job.

“It’s a very good relationship,” Dorsey said. “There’s a friendship there and we communicate and talk about everything on a daily basis. We talk a lot. And that’s the way it’s supposed to be. The better GM and head coach relationships, you’ve always got to have that, everybody’s got to be in lockstep in the same direction headed forward.”

Dorsey said a key is telling the coaches what you’re looking for at each position, then getting players with those traits.

“I know what it takes to put a head coach in position to win,” Dorsey said.

While local talk radio and Las Vegas oddsmakers are quick to throw Jackson onto the hot seat, Dorsey said it’s a long season and he’s not playing out scenarios. He didn’t ignore the reality of 1-31.

The other hypothetical Dorsey wanted to avoid was if the organization will feel pressure to play Mayfield if the season starts with more losses. Dorsey remains committed to the plan to give Mayfield the year — at least most of it — to watch and learn.

“We all know the complexities of that position, because now in the regular season their defenses are going to be so complex and I think it is unfair to just throw somebody into the fire right away,” Dorsey said. “You can’t do that. Does it give him a chance to succeed long term?”

He said quarterbacks need time for the game to slow down so they can process all the information at the line of scrimmage. He believes practice repetitions and film study while in the backup role ease the adjustment.

He went out on a limb by taking the confident, undersized former walk-on with the top pick and is glad he did.

“He’s a great teammate, he’s got a pretty good grasp of the playbook, he’s actually played in preseason games where he’s actually demonstrated he can play at this level, he can make all the throws, short, medium, long,” Dorsey said of Mayfield. “He can actually feel the pressure, step up within the pocket, not panic, stay cool and deliver like really good shots. He can roll out and extend the play and make a play on the run.”

Mayfield was part of Dorsey’s blueprint to acquire talent with leadership skills and a history of winning. He sees the plan coming together, and the circles disappearing.

“I like how they’re becoming a family,” Dorsey said. “Once you have single-mindedness and understanding, the same objectives and goals in that locker room, they’ll be able to come up in adverse moments. And that’s changing the culture.”

Joel Bitonio says he’s still waiting to find out where he’s playing vs. Steelers, as decision about left side of O-line remains a mystery
Ex-Browns linebacker Mychal Kendricks pleads guilty to insider trading