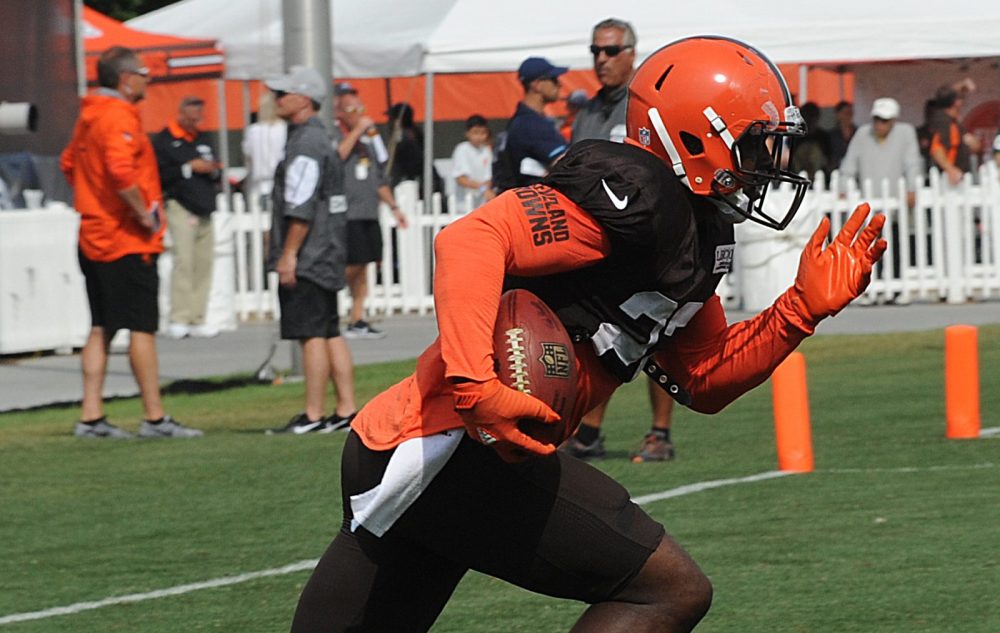 C-T Browns beat writer Scott Petrak met with second-year safety Jabrill Peppers for a wide-ranging discussion of life and football. They sat a few yards from the field after the first practice of Steelers week on a steamy Labor Day. Peppers couldn’t wait to take off his jersey in the oppressive heat. Petrak left his shirt on.

During the 17-minute conversation, Peppers talked about his high school success, lasting memory of the Ohio State-Michigan rivalry, playing Gregg Williams’ “angel” safety and the tragedy that shaped his life.

Scott Petrak: What’s your first memory of playing football?
Jabrill Peppers: My first memory of playing football was when I was too young to play, I used to run around out there with the Mighty Mites. The head coach of the Mighty Mites, and that’s the youngest level, used to let me run around with the football and then I was making the older guys miss. So he was like, “I knew you were going to be something from the day I let you run around with us certain time periods during the practice.”

SP: I just rewatched the incredible highlight video of you in high school. How good were you? And did you know you were that good?
JP: I didn’t know I was that good until I transferred schools. ’Cause my first years I was on the No. 1 team in the nation, they were coming off a national championship, so I’m like, it’s the system, got great guys around me. Then when I transferred schools and took those guys to two back-to-back state championships, that’s when I was like, all right (big laugh), maybe I can do something with this, man. Maybe I can do something. I’d say, you may not take it from me, but I’m probably top three all time in New Jersey.

SP: How special was it winning the four straight state championships? (He won two at Don Bosco Prep then two at Paramus Catholic.)
JP: It was definitely special, ’cause not many guys can say they’ve done that, especially with two different teams and a national championship. You know what I mean? And to tie that all with my track state championships and stuff like that, it’s very something I can hold my hat on.

SP: After watching the highlight reel, do you miss having the ball in your hands as much as you had it in your hands back then?
JP: I do, I do. It’s just something about having that ball in your hands. But I like going and trying to get the ball, too. And I’d rather hit somebody than be hit. But plenty of people can make the argument I was better on offense. But now that I’ve got a couple years to actually perfect the craft and put some time in on it, I’d say it’s definitely more neck-and-neck now. But definitely coming up, I was definitely better on offense.

SP: Could you play offense in this league?
JP: Oh, absolutely.

SP: So why defense?
JP: Just the attitude of defense. I like hitting more than I like being hit. Longevity. Running backs take a brutal beating in this league and they don’t play for that long anymore. And the league is becoming a more passing league, so running backs kinda come dime a dozen. But the really good ones make their marks. But running back when I was growing up was kinda the position. Now it’s more quarterback and receiver because it’s a softer league.

SP: I assume you still want the ball in your hands on kickoffs and punts.
JP: That’s why they allow me to do punt return, kick return. Usually offensive guys will do that because they want good ball security, good ballhandling guys. So they trust me enough to do that, so that definitely speaks volumes.

SP: Why did you pick Michigan for college?
JP: Best combination of academics and sports that was close to home.

SP: What’d you study?
JP: I changed my major a lot of times. Went from political science to communications to English, it varied.

SP: What school was your second choice?
JP: Stanford was my main choice, but it was too much I had to do to get in that they told me too late in the process, and it was all the way across the country. It was Michigan and Stanford, then after that it was Penn State and LSU.

SP: What was the best part of going to Michigan?
JP: Just the connections I made, the people I bumped elbows with and now being an alumnus of that prestigious university it’s connections you’ve got for life.

SP: You still think of that a lot? (OSU quarterback J.T. Barrett was awarded a controversial first down on a fourth-down run with Michigan leading in double overtime that set up the Buckeyes’ winning touchdown in 2016.)
JP: It doesn’t bother me as much, because it’s kind of like what if. Because I know without a doubt we’d have went to the national championship. Just because of what people thought about us, thought we were a big, slow team. But we had a lot of guys that are in the league from that squad, both offensively and defensively. So I think we would’ve shocked a lot of people. But, yeah, it doesn’t haunt me as much as it used to. But he definitely was short. But all those referees are from Ohio. They couldn’t have overturned that call and been able to go back home. I ain’t mad at ’em. It’s clear as day. But home-field advantage.

SP: Do people give you grief about it around here?
JP: Oh, yeah, all the time. That’s why I don’t really speak to people out here. Just go out there, do my job on the field, keep it moving.

SP: How frustrating was last season for you personally?
JP: It was definitely a lot of frustration. Not playing as well as you like, not making as much plays as you like. And that just magnifies everything else in life. The food don’t taste good. It’s one of those.

SP: Did you get sick of all the jokes on social media last year about how deep you played? (Peppers often lined up 25 yards off the line as coordinator Gregg Williams’ “angel.”)
JP: Yeah. Even when I wasn’t even back there, they would still think it’s me back there because you really can’t see who it is back there. I wasn’t mad at them, but it kind of got old after awhile. That’s just something people wanted to have fun with.

SP: Any of the jokes make you laugh?
JP: There were a couple that made me laugh actually. They had me in a boat outside the stadium. That one was pretty funny. And then they had me at Progressive Field. A lot of them made me laugh, I’m not going to lie, but they just played it out. It was like, all right, bro, we get it now.

SP: Is new free safety Damarious Randall lining up as deep as you did?
JP: I was 25, he’s lining up 19, 18. I would’ve killed to come up to 19, 18 yards. Killed. Even though it don’t seem like a huge difference, that 7-, 8-yard difference make a huge, huge, as far as angle-wise, breaks on balls, huge difference.

SP: What’s your ‘why’ for playing the game?
JP: My brother mainly. I mean, the one who passed away, the one who started potentialing me to do this from a young age. So once he passed away I just started taking it more serious, that’s why I do it.

SP: That’s got to be something that’s with you every second of every day. Was there a point when it switched from anger to inspiration? (His older brother, Don Curtis, was shot and killed at age 20 in 2010.)
JP: Definitely. The anger’s always still going to be there but you definitely learn how to channel it into other things.

SP: I’m going to switch gears. What do you like to do when you’re not playing?
JP: I record music.

SP: Are you good?
JP: I’m all right. I’m not going to quit my day job or anything, but I’m all right. I think people can listen to it. I’m definitely better than Shaq, Kobe and all those guys.

SP: Defensive back Briean Boddy-Calhoun is also a music guy. Do you guys talk a lot about it?
JP: We’re just trying to make sure we handle our due on the field first before we start dropping stuff. We can’t be losing games and dropping music, it’s just not a good look.

SP: What’s your favorite TV show?
JP: Well, it was “Criminal Minds” but I watched all of that. Now I’m watching “Power.” That’s really all I watch.

Josh Gordon says beating Steelers in opener would be “almost a Super Bowl win,” chances to do so “higher than they’ve ever been”
Todd Haley downplays going against former team, but players “know he’s fired up” to face Steelers