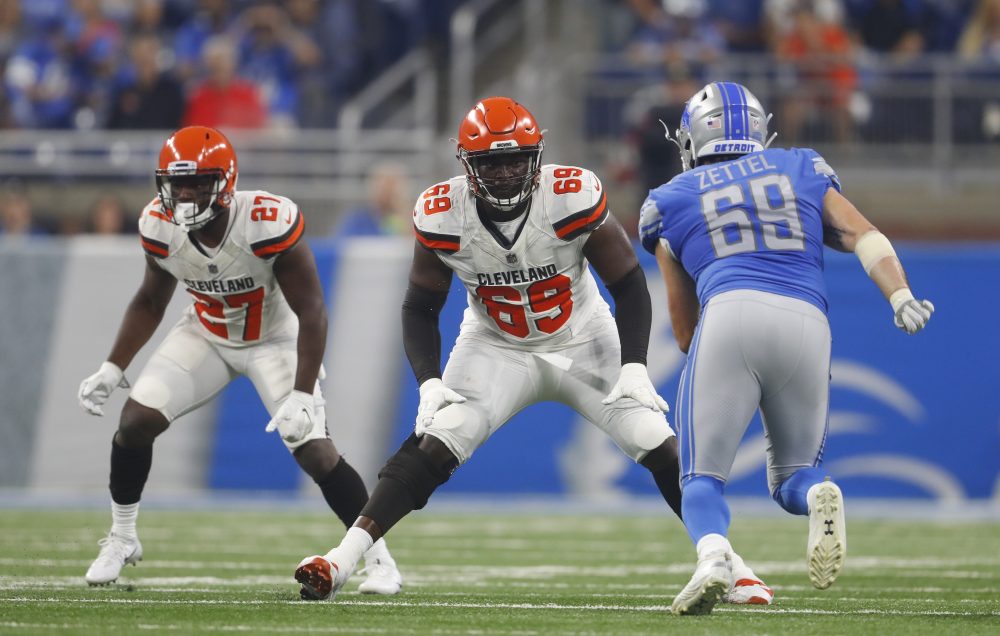 BEREA — Desmond Harrison saw this coming when no one else did.

Months ago, in fact.

Coach Hue Jackson decided to start Harrison, an undrafted rookie with little big-time college experience, at left tackle, surprising many in the NFL. Just not Harrison. He said he began to think he could be the starter when he arrived for rookie minicamp in May.

“Just how confident I am in myself,” he said Friday, minutes after Jackson announced the decision.

Self-belief aside, Harrison’s quick ascension into a starting role is a stunner. A year ago, he was beginning his career at West Georgia after two years away from football. On Sunday, he’ll have the job that belonged to future Hall of Famer Joe Thomas for the previous 11 openers.

Harrison, who’ll turn 25 next month, even came out of nowhere during the preseason. He opened training camp on the physically unable to perform list with a toe injury, missed the first 11 practices and seemed to be Plan E as the team looked for a left tackle.

But his athleticism continued to open eyes, Jackson started leaning this way last week and made it official Friday. Joel Bitonio moves back to his comfortable spot at left guard, and dejected rookie No. 33 pick Austin Corbett heads to the bench. Harrison (6-foot-6, 305 pounds) will face outside linebacker Bud Dupree and the Steelers in his NFL debut at FirstEnergy Stadium.

“When he came here, we were very excited about him,” Jackson said. “There were some things that he did at OTAs. You could see it. Then it got to be how bad did he want to be the left tackle. Just put his head down and worked.

“It is one heck of a story, but it does not matter until gameday. He has to go do it. He recognizes that. He is ready to go.”

Harrison’s path to the NFL was littered with detours. He began his college career at Contra Costa Community College in California in 2011. After two years and a spot on the All-America team, he transferred to Texas. He played seven games off the bench in 2013, was suspended twice in 2014 — reportedly for failing multiple drug tests — and kicked off the team.

“Just being immature, not handling my business,” he said.

Harrison (6-foot-6, 295 pounds) didn’t play for two more years before heading to Division II West Georgia, where he started nine of 10 games. He said he never lost the desire to play, trusted the plan and didn’t doubt he’d end up in the NFL.

“It wasn’t a football standpoint, it was just getting myself right mentally,” he said.

The Wolves opened against Fort Valley State a year ago, but Harrison isn’t sweating the quantum leap in talent to a Steelers team that led the NFL with 56 sacks last year.

“I feel like we’ve got some of the best defensive players in the country so I’ll be fine,” Harrison said, referring to practice matchup Myles Garrett.

Shon Coleman opened camp as the first-team left tackle, with Corbett and Greg Robinson other options before Harrison. But after returning from the injury, he rose up the depth chart and saw increased playing time as the preseason progressed. He started in the finale against the Lions and played 53 snaps.

“He is long. He is athletic. He can run. He is tough. He is all of the things that you want,” Jackson said. “He just has not done it yet at this level.”

Jackson said he “agonized” over the “huge decision” but decided it was best for the organization.

Thomas retired in March and the Browns didn’t have a surefire option to take his place. Jackson doesn’t want Harrison to feel that pressure, but Harrison understands the magnitude.

Harrison ran a 4.9-second 40-yard dash at the scouting combine, another example of why some have called him one of the most athletic linemen they’ve seen.

But his journey hit another pothole when he failed a drug test at the combine that put him into the NFL’s substance abuse program. He blamed the failed test for going undrafted and said he gave a long explanation to the Browns.

He said the message from general manager John Dorsey and Jackson was simple.

“I feel like I was already on the path to do that, so it wasn’t too big of an adjustment.”

Bitonio said the biggest challenge for Harrison will be the mental side, knowing whom to block every snap. They’ve been working on communication, and Bitonio will try to help him Sunday. He’ll be the first undrafted free agent to start a game for the Browns at left tackle since the AFL-NFL merger in 1970.

“If you watch any of his tape in the preseason or in college, he really finishes guys,” Bitonio said. “He likes to play the right way.

“I think he’s ready. I think the coaches and upper management have made that decision and they trust him and they know he’s going to get better every rep that he’s out there to improve. He’s a confident, kid, though. I know he feels like he belongs out there.”

Corbett played 242 snaps during the preseason at left guard but didn’t prove to the coaches he was one of the best five linemen and failed to keep the starting job.

Corbett played at left tackle for four years at Nevada and struggled with the move inside.

“It’s a position I’ve never played,” he said. “You got Joel who’s Pro Bowl-caliber. I’m nowhere near that level. So I just keep getting better and working every day to get to that level.”

Bitonio, also a Nevada alum, said he told Corbett to keep his head up.

Bitonio was initially reluctant to move to tackle and welcomed the switch back to guard, where he spent the first four years of his career.

“If you have someone to look up to and try to pattern yourself off of, there is nobody better than Antonio Brown,” Haley said. “If he could get a quarter of the stuff that AB is doing to make sure he is in his best position to succeed, he will be ahead of the game.”

** Callaway will open as the punt returner, with safety Jabrill Peppers also an option. Peppers will be deep on kickoffs.