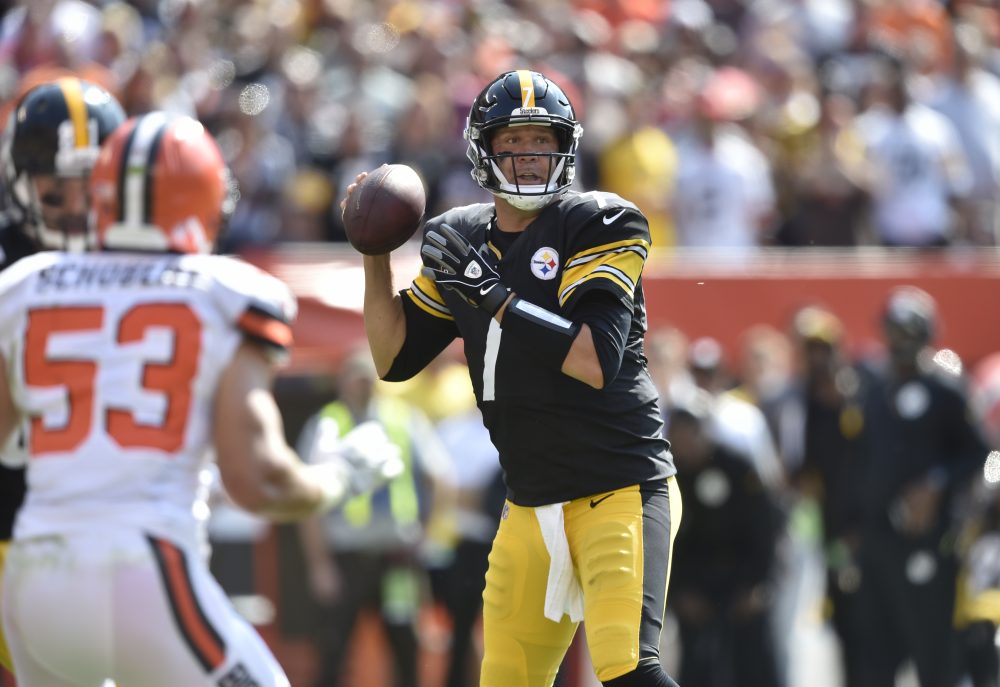 Corbett, the No. 33 pick, was the starting left guard throughout the preseason, playing 242 snaps in the four games. But he was sent to the bench when the coaches juggled the offensive line during the week, and won’t dress for the season opener this afternoon against the Steelers at FirstEnergy Stadium.

Undrafted rookie Desmond Harrison was inserted into the lineup at left tackle — the decision was announced Friday — shifting Joel Bitonio back to his spot at left guard. The Browns chose to have veteran Earl Watford, signed Aug. 28, be the interior backup for the game ahead of Corbett.

Former No. 2 pick Greg Robinson is the other backup lineman active.

Corbett started four years at left tackle at Nevada and struggled with the move inside. He was disappointed after the benching was made official.

“It hurts. You come here and that’s what you want to do, right?” Corbett said Friday about not starting.

Tight end Seth DeValve, who missed the preseason with a quadriceps injury, is active. So is undrafted rookie receiver Derrick Willies, who will have a role on special teams.

Tight end Vance McDonald (foot) is among the inactives for the Steelers. Jesse James will start in his place.

James had two touchdown catches in Pittsburgh’s 21-18 win over the Browns last year in the opener.

Steelers quarterback Ben Roethlisberger is 21-2 against the Browns. The first loss came in December 2009 on a night so cold he warmed up in the tunnel at FirstEnergy Stadium and looked like he didn’t want to be there. Maybe the steady rain and 20 mph winds forecast for all game will have the same effect.

The Browns need something to help slow down Roethlisbeger. He has a 95.8 career rating in the rivalry with 37 touchdowns and 17 interceptions. Of course, his success hasn’t been limited to meetings with the Browns. His 51,065 career yards are eighth in NFL history.

Everyone knows he’s big, strong, tough to tackle and has a right arm that can drive the ball through any weather. Browns defensive coordinator Gregg Williams said the separator is between the ears.

“He is very smart,” Williams said. “He understands how to get the ball out of his hand quickly. He understands a lot of things about coverage dynamics. There are not a whole lot of things that you can confuse him with, you just have to win your matchups.”

This year, he returned from a three-week absence at the beginning of camp but was back in time to brush up on the playbook and practice for a week. Coach Hue Jackson said Gordon won’t start and his snaps will be limited but still expects him to have an impact commensurate with his immense talent.

“He is as close to being totally back as I have seen in awhile,” Jackson said. “He has made some really good plays in practice. We want to see him do it on Sunday. That is what it is all about.”

Gordon’s 237 receiving yards in a loss to Pittsburgh in 2013 are the most in the history of the rivalry.

Pittsburgh’s Antonio Brown led the NFL with 1,533 receiving yards last season and was fifth with 101 catches. From 2013-17 Brown caught 582 passes for 7,848 yards. It’s the best five-year run for a receiver in NFL history.

He’s not the biggest or fastest. He’s just the most productive.

“He is a really, really, really good receiver,” Williams said. “He is someone that Ben looks to. The big thing is that you will never, ever, ever take him away. You just try to minimize.”

Brown and Cleveland’s Jarvis Landry are the only players to hit century-mark milestones over the last four years. They each had 100 catches last year, 200 over the last two years, 300 over the last three and 400 since 2014 (472 for Brown, 400 for Landry).

The Browns will try to slow down Brown with a pair of new cornerbacks, No. 4 pick Denzel Ward and free agent Terrance Mitchell. The coaches don’t think Ward is ready to follow Brown every snap in his first NFL game but he should see him plenty.

“I am definitely embracing that challenge. I look forward to going against him,” Ward said. “A great player, a great receiver. He is going to push you, and he is going to work every play. You just have to know where he is at all times on the field.”

Ward won’t be the only Browns rookie in the spotlight. He may not even be the one under the most pressure. Desmond Harrison will start at left tackle after going undrafted out of West Georgia.

“It means that he is very talented,” Jackson said. “He has earned it. He competed.”

Harrison’s incredibly gifted physically, and confident in those abilities, but it’s certainly fair to wonder how he’ll handle the jump in competition to a strong Steelers front seven. The biggest challenge will be the mental side, making sure he knows whom he’s blocking on every snap and not leaving quarterback Tyrod Taylor vulnerable to a free rusher.

Fourth-round receiver Antonio Callaway is also slated to start, share time with Gordon and return punts. Fifth-round linebacker Genard Avery will be a pass-rushing defensive end after an impressive preseason when healthy. And running back Nick Chubb, the No. 35 pick, will get at least a few carries spelling starter Carlos Hyde.

The Browns know they’re catching a break with the absence of Steelers running back Le’Veon Bell but are trying not to relax at all. James Conner, in his second year, will replace Bell, who’s out in a contract dispute.

“I don’t think he brings the same thing to the table as Le’Veon just because we’ve seen what Le’Veon can do both pass and run,” linebacker Christian Kirksey said. “But James Conner is still a great back.”

Bell is a two-time All-Pro who rushed for 1,291 yards last year and added 655 receiving yards with 11 total touchdowns. Conner, a third-round pick last year, rushed only 32 times as a rookie for 144 yards. The cancer survivor has improved his overall game, including catching the ball, but he’s not Bell.

“The other guy is a proven, top-of-the-line, one of the top players in the league,” Jackson said. “Not that James Conner is not that, he just has not done it to the level that Le’Veon has.”

Straight games for receiver Jarvis Landry with at least five catches. He was the only player in the league to do it in every game last season.

Browns’ record vs. Steelers in openers

These aren’t the same old Browns and they catch Pittsburgh at the right time and without Le’Veon Bell. Browns 24, Steelers 20.

Browns 2018 preview: Scott Petrak offers his predictions for the season
Commentary: Browns tie Steelers but it sure feels like a win … because they didn’t lose