Commentary: Browns tie Steelers but it sure feels like a win … because they didn’t lose 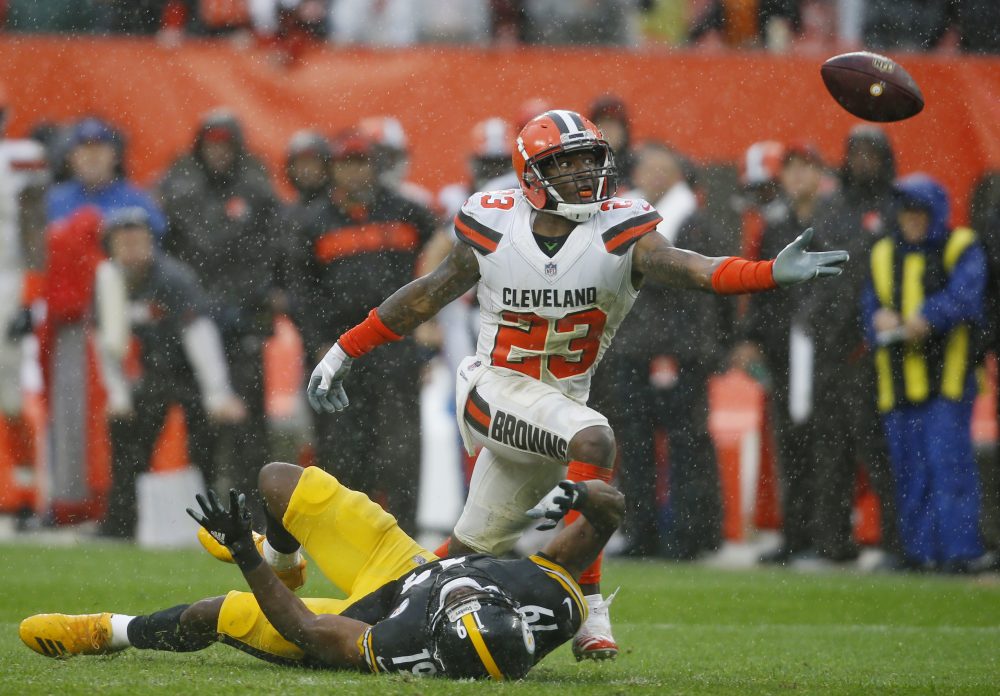 Each team got exactly what it deserved — a great, big, soggy nothing.

But it says here that the Browns beat the Steelers on Sunday, 21-21.

That’s right. The Browns won the tie. They won the tie because they didn’t lose. And if you’ve been paying attention lately, when the Browns don’t lose, they win. No matter what.

The losing streak isn’t over, but it’s been interrupted. Hello progress! A regulation, regular-season NFL game was played — and the Browns didn’t lose. Think baby steps.

Browns coach Hue Jackson spit that observation out like a bad piece of meatloaf. His Hueness, whose team hasn’t tasted victory since Dec. 24, 2016 — not that anyone is keeping track or anything — desperately needs to win one right away.

Instead, he tied one right away.

The game itself was nuts. None of it made sense.

Tomlin didn’t say it, but he was probably thinking, “I can’t believe we turned the ball over six times and didn’t lose.”

Is that even possible?

“You get six turnovers, you should win the game,” said Jackson, whose team did … but didn’t.

If there was a highlight to The Game Neither Team Won, it was the Myles Garrett-led Browns defense, which harassed career Browns-tormentor Ben Roethlisberger into three interceptions, four sacks and a Brandon Weeden-like 60.5 quarterback rating.

Garrett had five tackles, two sacks for minus-12 yards and two forced fumbles.

“When he’s healthy, he means a ton to our team,” Jackson said. “He needs to be that player every week.”

Rookie Denzel Ward had two of the Browns’ three interceptions in getting thrown into the deep end of the pool in his very first game, opposite Steelers all-world receiver Antonio Brown.

“Denzel is made of the right stuff,” said Jackson.

But on this day, in their first game of the season, against the powerful Steelers, in a game-long downpour, there was more wrong stuff than right stuff for the Browns.

The offense under new quarterback Tyrod Taylor looked overmatched and underwhelming in the first half. The Joe Thomas-less offensive line was manhandled by Steelers defenders to the point that for most of the game the Steelers had more touchdowns called back by penalty than the Browns offense scored.

“Things weren’t going pretty by any measure in the first half,” said Taylor, who was sacked seven times as the Steelers defensive line did its Niagara Falls impression.

The Game That Neither Team won was also soiled by a penaltypalooza. It rained rain and it rained penalty flags. The two teams combined for 23 penalties and 203 yards.

The Browns led in penalties and penalty yardage for most of the game. But the Steelers, playing with a loosey, goosey casualness that only a team facing one on an 0-16 and 1-31 free fall could get away with, caught and passed the Browns in this game-within-the-game game.

All of which contributed to The Game That Neither Team Won going into — egads! — overtime. You know, just to make sure that neither team wanted to.

Shortly after that, the clock ran out and the game officials mercifully sent everyone home for the day.

What it should feel like for the Browns is a win. They played the Steelers, who judge their seasons by whether or not they reach the Super Bowl, to a tie … A TIE.

For a team coming off an 0-for-16 whiff that cost dozens of members of the organization their jobs — with the exception of the coach who coached it — playing a playoff contender to a tie in the first game of the season beats getting beat outright.

There will be plenty of time for that later.