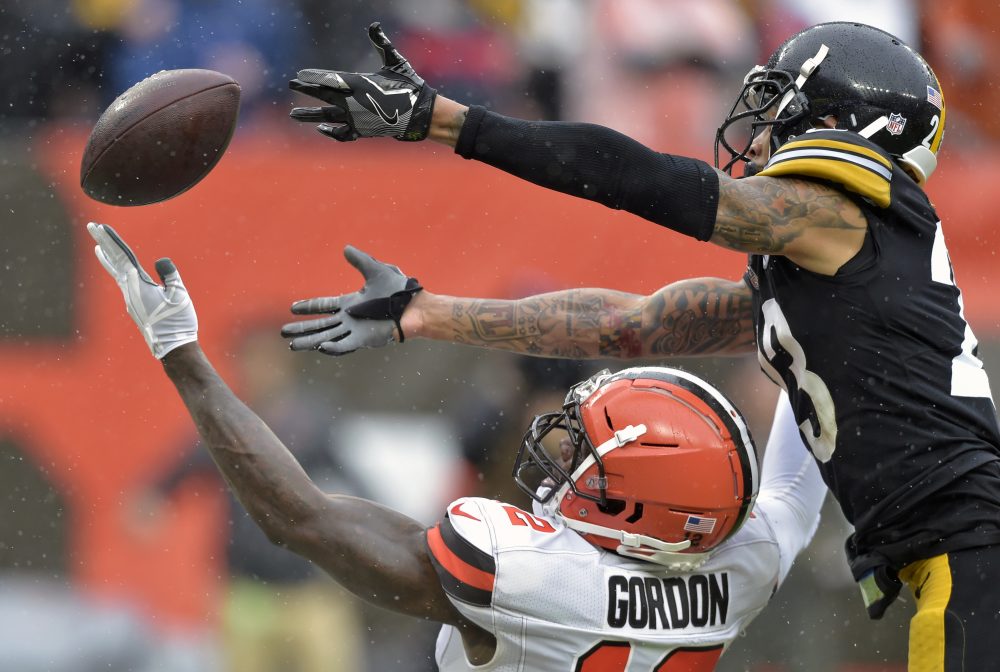 CLEVELAND — The losing streak ended and no one celebrated.

Not the coach, not the players, not the fans.

The Browns snapped their franchise-worst 17-game skid in the most Browns way possible: They tied the Steelers in the season opener Sunday at FirstEnergy Stadium.

After 70 minutes of football played in constant rain, six Steelers turnovers and a missed field goal by each team in overtime, the scoreboard read: Browns 21, Steelers 21.

“There’s nothing to be excited about. Not at all,” said receiver Josh Gordon, whose acrobatic 17-yard touchdown catch tied the game with 1:58 left in regulation. “We don’t go to work in order to get ties. We’re here to win a game. It’s the equivalent of a loss to me. It’s not good enough.”

“It is a sour feeling,” quarterback Tyrod Taylor said.

The Browns and Steelers tied for the first time in 133 meetings.

Coach Hue Jackson improved to 1-31-1 with the Browns. He took no consolation.

The last chance to pull off what would’ve been a miracle victory was a 43-yard field goal attempt by Zane Gonzalez after rookie linebacker Genard Avery stripped Steelers quarterback Ben Roethlisberger and linebacker Joe Schobert grabbed the ball in midair and returned it 28 yards to the 12-yard line. A needless block-in-the-back penalty by defensive end Myles Garrett at the end of the return pushed the Browns back to the 24.

“That was a bad play by me. I should’ve been more aware,” Garrett said.

Steelers safety Sean Davis got a great jump on the kick — Jackson thought he was offside — and teamed with linebacker T.J. Watt to drive Bitonio backward. Gonzalez’s kick never got above chest-high, and Watt (four sacks, 11 tackles) got a hand on it. The ball fluttered feebly and landed well short of the end zone.

“They broke through and they’re right there, so there’s not much more we could do about it,” Gonzalez said.

“The ball did not get up,” Jackson said.

That the Browns had a chance at a victory didn’t seem possible deep into the second half. The Steelers had the ball and a 14-point lead with 7:44 left and the Browns looked like the same old Browns, with a quarterback they couldn’t protect and who couldn’t make clutch throws when given the chance.

Garrett forced two fumbles on two straight possessions. He had two sacks, a pass defensed and was penalized for a questionable roughing the passer on third down that led to the first Pittsburgh touchdown in the second quarter.

Carlos Hyde scored on a 1-yard run after Garrett stripped running back James Conner to start the comeback. Taylor then made two big-time throws down the sideline and Gordon tied the game with his only catch in three targets.

“The football team has grit. They are tough-minded,” Jackson said.

The tie was about wasted chances as much as resilience. The defense forced six turnovers — three interceptions and two fumbles by Roethlisberger — after only 17 all of last season. Rookie cornerback Denzel Ward, the No. 4 pick, had two interceptions.

But the offense sputtered for all but two drives, managing only seven points off the extra chances.

They never even led Sunday.

The offense struggled to find a rhythm, then couldn’t sustain it. New coordinator Todd Haley called a bunch of passes early against his former employer, but Taylor couldn’t execute under a heavy pass rush that had him running for his life. The conditions didn’t help, as Taylor went 15-for-40 for 197 yards, seven sacks, a touchdown, an interception and a 51.8 rating. He rushed eight times for a team-high 77 yards, including a 20-yard touchdown scramble.

“It was not pretty in the statistics category, for sure,” he said. “I have never been a stats guy. Yes, it would be ideal to come out and light up the stat chart, but wins and losses are ultimately what a quarterback is judged on, and today was a tie.”

Taylor made two really good deep throws down the sideline, for 38 yards to Rashard Higgins and the Gordon touchdown, to tie the game. But he underthrew Gordon on another go route with 23 seconds left in regulation from the Pittsburgh 43 as the Browns looked like they were ready to pull off the upset.

Taylor said he tried to give Gordon a chance to go up and make a catch, but cornerback Cameron Sutton was in better position and made the play.

“Me and Josh were on two different pages, but I take the blame for that,” Taylor said.

The Browns won the coin toss and started overtime with the ball but couldn’t convert third-and-1 on an incompletion deep down the seam to tight end David Njoku, who had two drops in the third quarter.

The Browns didn’t have a first down in four overtime possessions. The Steelers’ best chance to win in overtime ended with a missed 42-yard field goal by Chris Boswell.

Despite 31 new players, a new offensive coordinator and new optimism, the Browns continued many of their old bad habits. They allowed Conner to rush for 135 yards and two touchdowns while filling in for All-Pro Le’Veon Bell, who’s away from the team in a contract dispute. They were penalized 11 times.

“Of course, the ultimate statement would have been to come out of this game with a win,” Taylor said. “We definitely fought hard throughout four quarters and even in overtime. Whatever we have to do to get this team a win and multiple wins after that, we have to find what that is.”