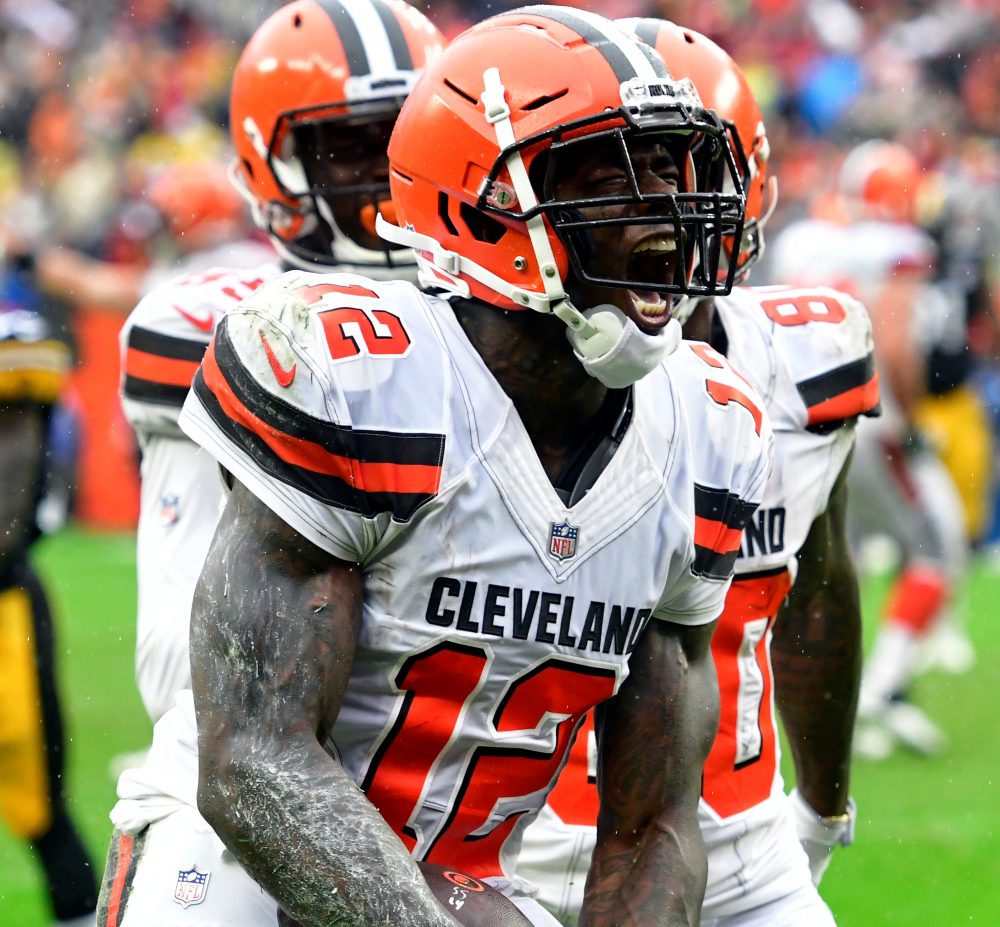 CLEVELAND — Josh Gordon had one catch. It was enough to remind teammates, foes and fans the type of plays the receiver’s capable of making.

Gordon jumped near the goal line, reached back over cornerback Cameron Sutton and plucked the ball out of the air for a 17-yard touchdown that tied the game with 1:58 left in regulation. The Browns and Steelers ended in a 21-21 tie after a 10-minute overtime Sunday at FirstEnergy Stadium.

“That brought me back to every other touchdown he’s scored,” left guard Joel Bitonio said. “He’s just a freak athlete. We want to get the ball in his hands as much as possible and that was just an example of a great play. It was really cool to see.”

Gordon was targeted three times by quarterback Tyrod Taylor. Former Browns cornerback Joe Haden broke up a deep post route in the end zone in the third quarter, and Sutton intercepted a route down the sideline — similar to the touchdown — in the final minute of regulation.

Coach Hue Jackson was adamant Gordon wouldn’t start after he missed the first three-plus weeks of training camp to work on his sobriety and mental health, but coordinator Todd Haley called for the three-tight end personnel package on Cleveland’s first offensive snap and it included Gordon.

“I saw it just like you did,” Jackson said. “Not what I wanted, but we will get through that, too.”

Gordon returned to the sideline for the rest of the series and the next before re-entering the huddle. His playing time increased throughout the game and he played a high percentage of snaps in the second half and overtime.

He said the Steelers tried to take him away with double teams. They couldn’t do that on the touchdown.

“It was awesome,” receiver Jarvis Landry said. “That’s the type of plays we’re going to need from Josh all season. I guess that was just the start of it.”

Gordon, who’s served multiple drug suspensions, played in an opener for the first time since his rookie year of 2012. He and Taylor said they weren’t on the same page on the interception, a play in which a completion likely leads to a victory.

“I probably went too wide,” Gordon said. “A lot of variables go into a play, but more than anything, he just made a good play on the ball defensively.

“From my perspective it looks like it’s going deeper than it is, and sometimes it just dies on you.”

Gordon said he considered the tie a loss but was able to take away some positives.

Undrafted rookie left tackle Desmond Harrison looked like an undrafted rookie in the first half. He was penalized for two false starts and overmatched a few times in pass protection and the run game.

Jackson stuck with him after halftime and Harrison played better.

“I think in the first half he was a little bit excited to go out there,” Bitonio said. “A couple false starts, a couple missed assignments and stuff. Then I felt like in the second half he was really more locked in and getting his job done.

“So he improved over a half, which is impressive to see. His first start against the Pittsburgh Steelers, in a rain game, it was not the easiest situation for him. And he definitely settled down as the game went on.”

Taylor, who was sacked seven times, also noticed an improvement from Harrison.

“I think he gained confidence as the game went on and continued to keep battling his butt off,” he said.

Landry’s debut with the Browns was memorable. And not just because of the tie.

He caught seven passes for 106 yards, including a 39-yarder — all tops on the team. He has caught five passes in 18 straight games.

“It’s tough, but I’m really proud of all of our guys and all of our coaches, but the end result was not the way we wanted to,” Landry said. “We’ve got a lot of things to correct and get better as a team.”

He had a hard time processing the tie.

“As a competitor you always want to leave with a win,” he said. “We’ve got things to clean up and we’ll move on from there.”

Landry displayed the production that made him desirable in a March trade with the Dolphins. He also flashed the fire that earned him a reputation. He fought twice with Steelers cornerback Artie Burns, drawing a penalty on Burns on the latter.

The torrential downpour never came and the 30 mph wind gusts stayed away, but it rained before, during and after the game. The teams continued to pass — Taylor 40 times and Pittsburgh’s Ben Roethlisberger 41 — but the conditions clearly affected some throws and footing.

“That is something that you have to battle with,” said Taylor, who completed 15 passes (37.5 percent) for 197 yards with a touchdown and an interception. “I understand that the weather can be a little bit of everything here in Cleveland. You have to be able to be weather-proof. At times, we were. At times, we were not.”

Corbett, the No. 33 pick, was a healthy scratch after starting at left guard throughout the preseason, playing 242 snaps. He was sent to the bench when Harrison was named a starter and Bitonio shifted back to guard.

The Browns chose to have veterans Earl Watford and Greg Robinson active on the bench. Watford, who was signed Aug. 28, played a few snaps as a sixth lineman and would’ve been used in case of an injury to center JC Tretter.

“Man I swear I’m so EXCITED to watch @Browns today!” he tweeted before the game. “I’m up like I’m headed to the stadium to prepare to play.”

He wasn’t dismayed by the tie.

“All in all great EFFORT and FIGHT!! @Browns,” he tweeted.

** Fox Sports’ Jay Glazer reported on the pregame show the Browns tried to trade for injured Colts quarterback Andrew Luck during last season. They were rebuffed.

** Police officers stood on the sideline with the Browns for the national anthem.