Browns 21, Steelers 21: The breakdown — thumbs up, thumbs down, the matchups 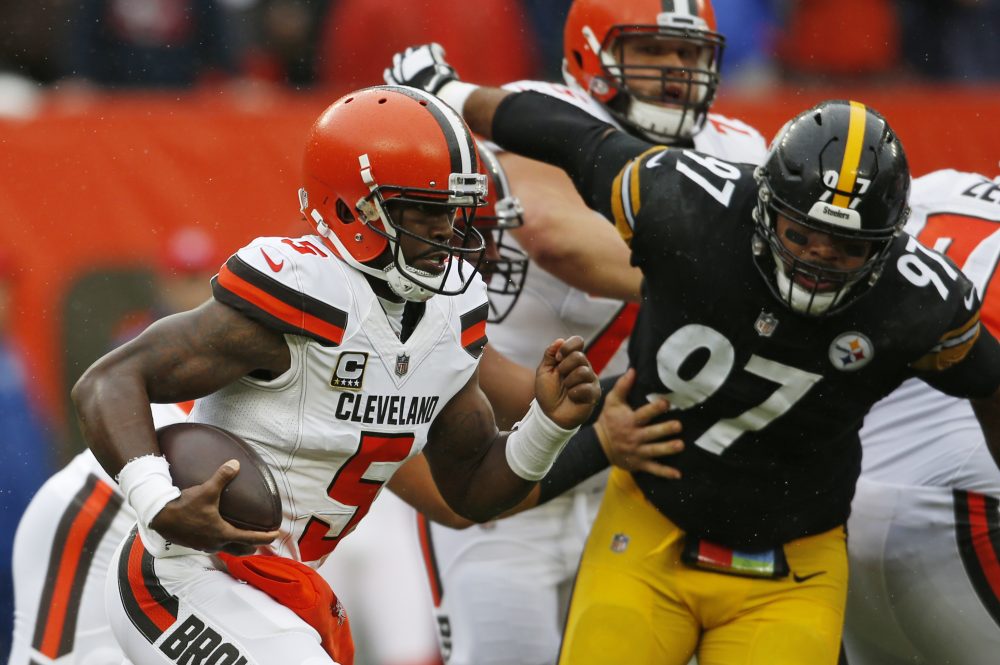 He’s quickly become a nemesis for the Browns. Just like so many Steelers defenders before him.

Watt, in just his third game in the rivalry, was virtually unstoppable. He had four sacks, eight tackles and blocked Zane Gonzalez’s 43-yard field goal attempt at the end of overtime to preserve the 21-21 tie.

“I got my left hand on that,” Watt said. “I treated it as I was just trying to make a play.”

In his NFL debut last season in the opener in Cleveland, Watt had two sacks and an interception. He also had a sack in the 2017 finale that finished Cleveland’s winless season. He’s the younger brother of Texans superstar J.J.

This is not to pin the loss on Taylor. His protection was nonexistent for much of the game, the conditions were ugly and the play calling didn’t do him many favors. But given repeated chances to win the game at the end of regulation and overtime, he couldn’t deliver.

“Was not able to get the job done,” he said. “The only stat that matters to me is wins and losses.”

The franchise’s 29th starting quarterback since 1999 impressed teammates by taking the punishment and keeping them in the game.

“Extremely poised, extremely resilient, getting banged up, taking hits, getting rushed in the pocket, still finding out ways to make his checkdowns, make his reads,” receiver Josh Gordon said. “I’m sure he wishes we could have a bunch of those plays back, but he stayed in there. He’s cool under pressure. He always is and that makes it easier for us to do our jobs.”

Watt didn’t have to stick his hand high to block Gonzalez’s try at a winning field goal. The kick came out low, and didn’t have a chance with Watt and safety Sean Davis pushing left guard Joel Bitonio back toward Gonzalez. Bitonio said the Steelers loaded the left side and were able to get a good push. Coach Hue Jackson and Gonzalez believed the Steelers were offside — Davis got a great jump but on replay it was difficult to tell on replay if he left early.

“We just gotta sit in there,” Bitonio said. “We’ve just got to be better on that field goal on the left side there.”

Gonzalez said the steady rain and soggy field had nothing to do with the miss. He put none of the blame on himself.

“No, that’s not a pulled kick, they broke through and they’re right there, so there’s not much more we could do about it,” he said. “Our job is you look at the spot, you kick it and I felt like I hit a great ball and then when I looked up it was boom-boom situation and it kind of sucks.”

The record since 1999 for teams with a turnover differential of plus-five or better. The Browns have two of the losses and now the tie.

“It was a thriller. It was fun. We fought back and tied it up. That is just a credit to the perseverance and the toughness on this team to not give up.” — Defensive end Myles Garrett, who had two sacks and two forced fumbles.

Tyrod Taylor never got going as he was pressured all day. Josh Gordon’s only catch in three targets was a touchdown. Jarvis Landry had seven catches for 106 yards.

Ben Roethlisberger threw for 335 yards and a touchdown but had three interceptions and lost two fumbles. James Conner rushed for 135 yards and two touchdowns with a fumble. Antonio Brown caught nine passes for 93 yards.

The Browns gave up yardage. They also gave the team a chance by forcing six turnovers. Rookie Denzel Ward started things with a diving interception.

The Steelers sacked Taylor seven times and harassed him throughout. They allowed only seven points off the turnovers.

Zane Gonzalez’s low field goal attempt in overtime was blocked. The coverage units were substandard, allowing a 28-yard kickoff return and a 22-yard punt return by Ryan Switzer. There were too many penalties on the returns, and Jabrill Peppers had a bad fair catch in overtime.

New coordinator Todd Haley’s game plan called for too many passes early and left Taylor vulnerable to the pass rush. The lone sustained drive of the day featured eight straight run calls to open the third quarter and ended in a touchdown. Hue Jackson’s team didn’t quit despite dire circumstances in the fourth quarter.

Commentary: Browns tie Steelers but it sure feels like a win … because they didn’t lose
Analysis: When talking about Browns QBs, don’t forget patience, perspective and the plan