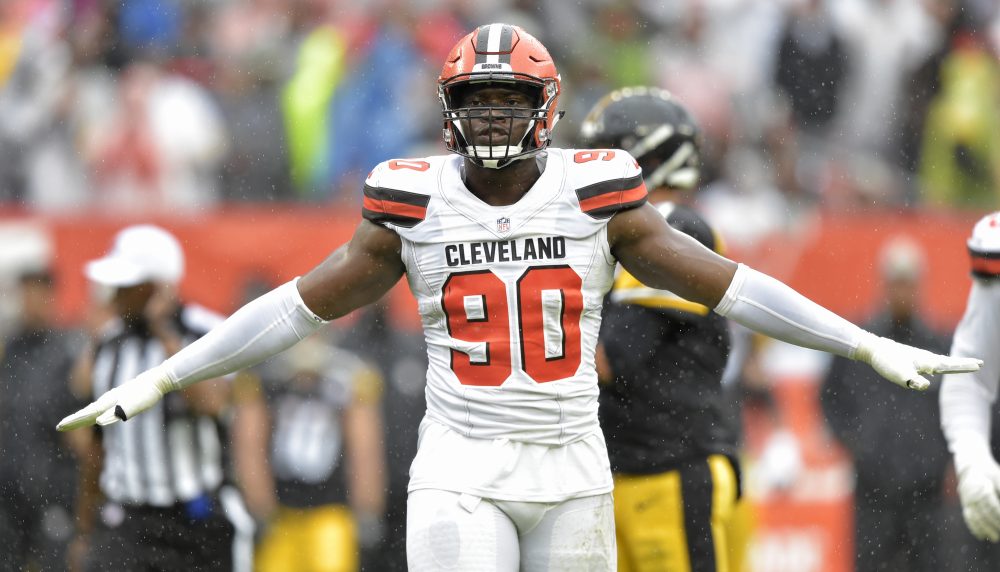 Defensive end Emmanuel Ogbah suffered a sprained left ankle and could miss at least a couple of games.

Ogbah was in a walking boot Monday and scheduled to undergo further tests, and Jackson didn’t sound optimistic, although he said he didn’t think the injury was a “true” high ankle sprain.

“It might be something like that,” Jackson said. “I don’t think it’s the ankle sprain that lasts six weeks or whatever that is, but we’ll see exactly where it is here later on today.”

Ogbah appeared to get hurt on the last play of the first quarter while being blocked. He returned in the second quarter but didn’t play much after that. He finished with 27 snaps (32 percent), had a tackle and broke up a screen pass.

Ogbah, a second-round pick in 2016, had four sacks in 10 games last year, missing the final six with a broken right foot.

Chris Smith, a free agent from the Bengals, would likely take Ogbah’s spot in the starting lineup. He filled in Sunday and played 57 snaps, with three tackles.

Anthony Zettel is also a candidate. He was claimed late last week off waivers from the Lions and inactive Sunday. He started 16 games last year in Detroit and had 6.5 sacks.

“I think we have some guys that can do it,” Jackson said. “We’ve just got to go get them prepared and ready to do it.”

Undrafted rookie left tackle Desmond Harrison gave up a sack to outside linebacker Bud Dupree, was beat on other plays in the pass and run games and was called for two false starts. He’ll remain the starter.

“There is no doubt,” Jackson said. “He fought, he battled hard. He did some really, really good things. I was excited about it being his first game and playing against who he was playing.”

Harrison said he will study more before this week’s game in New Orleans so he doesn’t have the same missed assignments that hurt his performance against Pittsburgh.

“There were a lot of things I did I shouldn’t have done and I did some good things, too, but I just feel like I could’ve done more,” he said.

Defensive end Myles Garrett made a statement with two sacks and two forced fumbles. He made another by playing all 84 defensive snaps.

“I challenged him to,” Jackson said. “Last year he played 71 percent and if I am not mistaken the top guy this past year was in the 98 percentile. So I think he was chasing that.

“And that says a lot. Because there was a couple of times that I knew he wanted to come out. He just looked, he was on his way and said, ‘Nah, I am staying,’ and kept playing. So we now know, and I think he now knows, he can play as long as he needs to.”

Jackson wants Garrett to get some in-game rest moving forward.

“So hopefully in the fourth quarter he can go make a play to win the game for us,” he said.

Garrett rolled an ankle while being taken to the ground by an offensive lineman but Jackson said he’s fine.

After the game Jackson thought Steelers safety Sean Davis was offside on Zane Gonzalez’s blocked field goal from 43 yards at the end of overtime. He changed his mind after watching the film.

“I think the guy was right on our snap, and he is a little bit ahead of everybody else on his team,” Jackson said. “I do not think that was (offside) at all. We’ve got to do a better job of protecting on that side. They go some tremendous push, knocked us back and the ball has got to get up a little higher. The ball was hit left a little bit, so we’ve got to fix those things.”

Garrett was penalized for a block in the back on middle linebacker Joe Schobert’s fumble return late in overtime that cost the Browns valuable field position before the blocked kick. Jackson called the penalty “inexcusable.”

** Schobert played all 84 defensive snaps. He played every snap last season. Christian Kirksey was next among linebackers with 61, followed by Jamie Collins with 51.