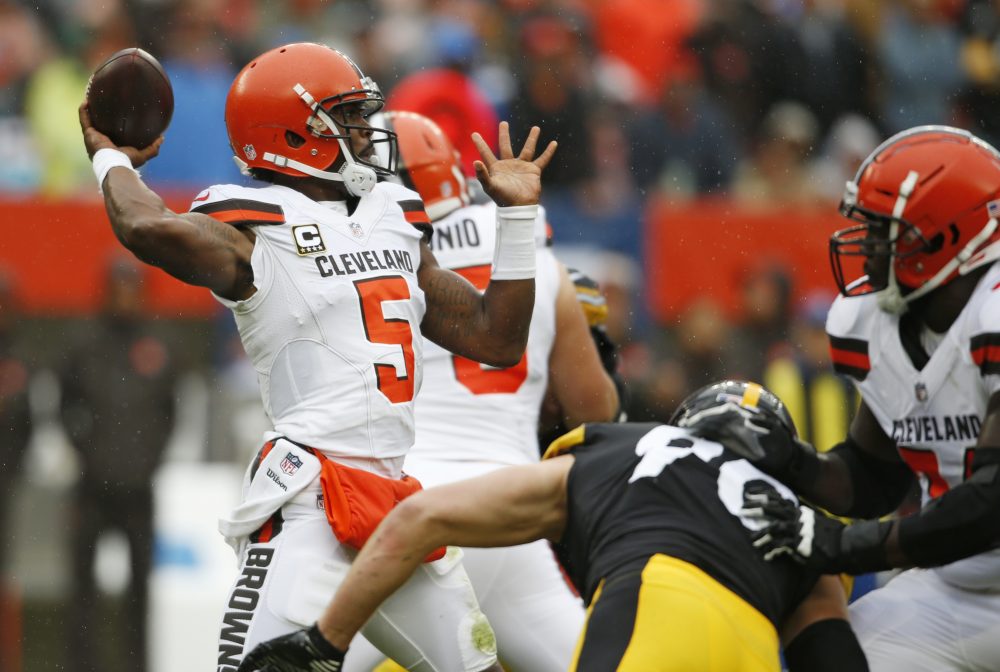 BEREA — Tyrod Taylor was one pass from changing the narrative.

So when the opener Sunday against the Steelers ended in a 21-21 tie — instead of a remarkable, tone-setting victory — the focus remained on what Taylor failed to do. The list was long and had some quickly questioning his status as the starter.

Taylor, a career 61.6 percent passer, completed only 15 of 40 passes (37.5 percent) for 197 yards, a touchdown, an interception and a 51.8 rating. He converted six turnovers into just one touchdown, and the only sustained scoring drive featured all runs.

What does Taylor need to do better Sunday in New Orleans?

The coach wasn’t satisfied with his quarterback’s play but wanted to make it clear the blame shouldn’t land in just one spot.

“Sometimes guys got to be in the right spot. Protection has to hold up for him. All of those things in a passing game make a difference.”

Because Baker Mayfield was the No. 1 pick in April and because Cleveland is on its 29th starting quarterback since 1999, Mayfield was a topic on talk radio Monday. Jackson gave the reporter a disapproving look when asked about the length of the leash he’ll have with Taylor as the starter.

“I mean, he is the quarterback,” Jackson said.

“Tyrod’s the leader of this team I think on both sides of the ball,” center JC Tretter said. “I think everybody looks to him to lead. He understands what his job is and what his responsibilities are and he’ll be the first one to tell you whether it was good enough or not good enough.

“So us as a group, we all take his lead and we hold ourselves to high expectations, as well. So I think everybody in the locker room understood what we needed to do and what we weren’t able to do yesterday.”

The Browns traded for Taylor so they could let Mayfield learn from the sideline for more than a few weeks. Now they need Taylor to play more like the guy who’s won 22 games as a starter in the NFL rather than the one who’s lost 22.

The critics from his three years in Buffalo would’ve recognized some of Taylor’s issues against the Steelers. He was too quick to run (eight rushes, 77 yards), took too many sacks (seven) and was reluctant to take chances downfield (receiver Josh Gordon was targeted only three times plus one not counted because of a penalty).

“Well, I’m not going to say hesitant,” Jackson said of Taylor’s willingness to stand in the pocket and deliver the ball. “I didn’t think we had a lot of people open at times and he had to hold the ball. And I think sometimes we get hit up a few times it gets a little different. He took one shot that was really, really tough, and he got up and kept going.

“So we were not in a rhythm obviously throwing the football early.”

Taylor’s uncharacteristic inaccuracy came on throws short and long. The obvious ones downfield included two underthrown completions to receiver Jarvis Landry that cost the offense yardage, if not touchdowns.

Jackson refused to blame the rain.

“He just missed some throws,” he said. “He underthrew some balls. He has to do his job better.”

Arguably the biggest misfire came with 23 seconds left in regulation and a chance to win. Gordon was one-on-one with backup cornerback Cameron Sutton and appeared to have a step, but the throw was short and intercepted.

Taylor didn’t talk to reporters Monday but discussed the interception after the game.

“Me and Josh were on two different pages, but I take the blame for that,” he said. “I could have put it down the field a little bit more. I was trying to give him something that he could go up and jump for. Just have to get better at that.”