Drew Brees says Baker Mayfield has “all the tools,” “can be a lot better than me” 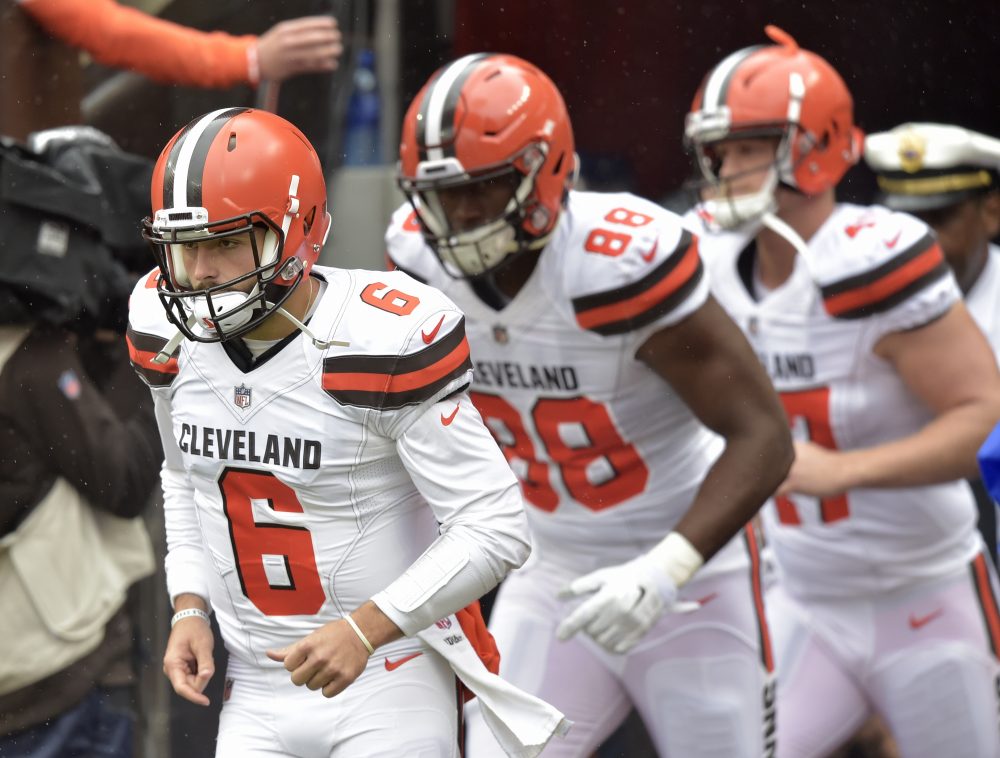 BEREA — Drew Brees has passed for 5,000 yards in a season an NFL-record five times. He’s 42 completions from passing Brett Favre (6,300) and becoming the league’s all-time leader. His 70,884 passing yards rank third behind Favre and Peyton Manning.

As the patron saint of 6-foot quarterbacks, Brees should be the role model for Browns rookie Baker Mayfield.

“Oh, I think he can be a lot better than me,” he said Wednesday on a conference call. “He’s got all the tools. He’s more athletic. He probably can run around better. He’s got a stronger arm.”

Mayfield and Brees are from Austin, Texas, but Brees said they haven’t talked. He kept tabs on Mayfield when he was at Oklahoma, winning the Heisman Trophy as a senior.

“I couldn’t have been more impressed with what he was able to accomplish in college, especially last year,” Brees said. “Really impressed with the way that he plays his game. I think he’s a great competitor.

“I think he’s going to be a real good professional quarterback. I love his competitiveness and his playmaking ability.”

“Well, at some point you just have to look at results, right?” Brees said. “So you have to let your mind go past the measurables, maybe how big a guy is or how fast he runs or that kind of stuff and just turn on the tape and does the guy compete, does the guy make plays, does the guy win football games? And obviously he’s proven he can do all those things.”

Because Brees has worked himself into the discussion of the greatest quarterbacks of all time, he helped pave the way for Mayfield to be the top pick.

“I do take a lot of pride in that,” Brees said.

He said he learned a lot from Doug Flutie, who was listed at 5-10 and the starter during Brees’ rookie year with the Chargers.

“So you talk about a guy who has overcome the odds every step of the way with his size and I think the preconceived notions people had about his ability to play the position,” Brees said. “He played 20 years of professional football at every level, USFL, NFL, CFL, then back to the NFL and played at a very, very high level. So I had a chance to learn from one of the absolute best in my opinion, especially when it came to just having to at times just make plays because of your size and maybe certain limitations. He would get the job done.

“We call it the 6-foot and under club. We kind of have the chip on our shoulder ’cause we’ve heard it our whole life. It gives us an edge.”

Is Mayfield a member of the club?

He was informed Mayfield is 6-foot-0½.

“All right, well, that counts. He’s in the club,” Brees said.

“When you track his college career and you see the production, there’s a confidence with him,” Payton said. “You see real good leadership skills. And I think that it’s a position that there’s a premium placed on it.

“The thing that was impressive about him is that you could see him move in the pocket and still locate balls down the field and it wasn’t just take off to scramble, so he hurts you in the pocket and even with plays that developed a little later.”

Brees has set the perfect example for Mayfield to follow. He’s made a Hall of Fame career through unwavering work ethic, incredible intelligence, quick decision-making and unparalleled accuracy. His 67.0 career completion percentage is tops in NFL history, and his 72.0 percent last year set a league record.

Like Brees, Mayfield isn’t an elite athlete, scrambles to throw, not run, and takes great pride in his accuracy.

“Obviously, being compared to Drew Brees, anybody would be excited about that, but this guy is one of the best quarterbacks in the National Football League, and we hope that is what Baker is going to be in the future,” coach Hue Jackson said. “That is the goal.”

Brees has been asked about his lack of ideal height forever. While he may not love the line of questioning, he’s insightful discussing it.

“I don’t know any other way,” he said. “I don’t know what it’s like to be 6-5 ’cause I never will be 6-5, never have been 6-5. But I’ll say it like this: If every one of you closed your eyes, all of your other senses would be heightened, your sense of smell, your sense of hearing, all that other stuff. So maybe because I’m 6 feet, maybe there’s certain things that I can’t see as well, but for that reason, maybe I can hear it and feel it better because that’s what I’ve had to do my whole career. You find a way to make up for it. You just get it done.”

Mayfield opened the season as the backup to Tyrod Taylor and the plan is for him to remain in the role for the foreseeable future. Brees said Mayfield needs to make the most of the time watching.

“Man, be just a sponge. As a young player you try to learn everything you can about the game,” he said. “And he gets to play behind a seasoned veteran like Tyrod Taylor, who’s started a bunch of games in this league and won a bunch of games, that led Buffalo to the playoffs last year.

“He gets to play for a coordinator like Todd Haley, who’s a longtime coordinator and been a head coach, coached Big Ben (Roethlisberger) in Pittsburgh for the last number of years, going up against a defense like Gregg Williams’ every day in practice, Gregg does a lot of good things defensively, has been a great defensive coordinator in this league for a long time. So he’s got the opportunity to learn from a lot of good resources there.”

Myles Garrett healthy, motivated and determined to change games and make a difference this season — and opener
Teammates expect sustained excellence from Myles Garrett, and he’s ready to give it to them