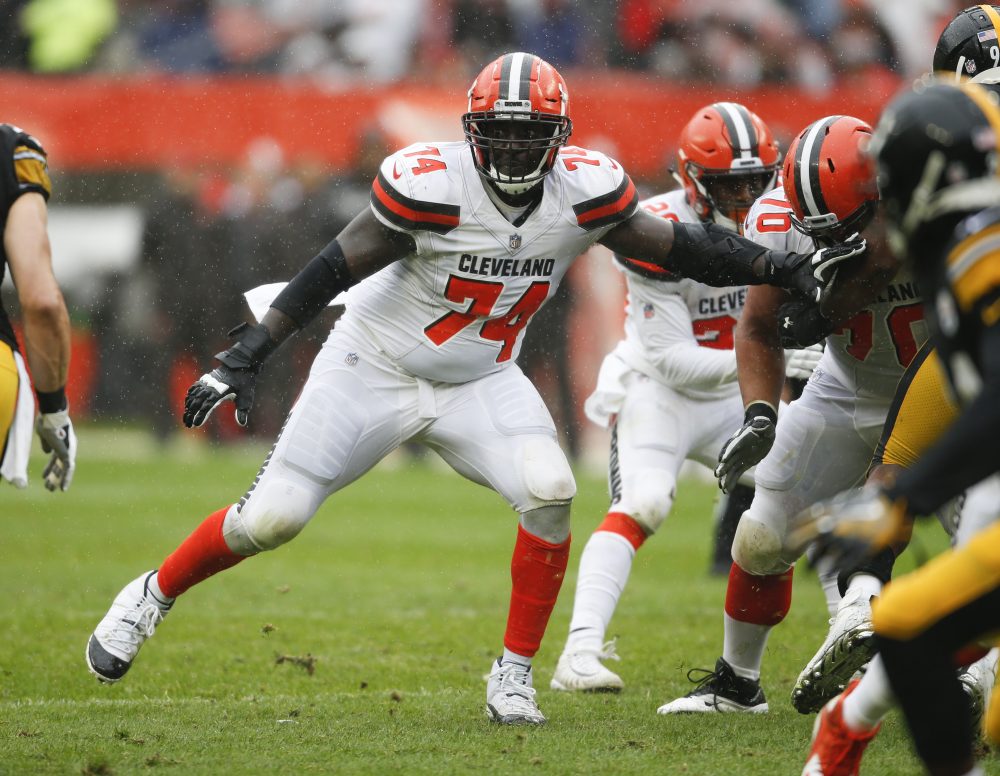 BEREA — Of all the issues with the offense that turned a win into a 21-21 tie in the opener against the Steelers, running back Duke Johnson had no trouble picking the one that must be remedied Sunday against the Saints in New Orleans.

Tyrod Taylor was sacked seven times, hit 10 and pressured throughout in his Browns debut. The line, tight ends and running backs all had breakdowns.

“That’s way too many,” right tackle Chris Hubbard said. “We’ve got to get better as a whole unit. We still have a lot of growing to do and we’re capable and we will do it.”

The Saints provide another test, especially for Hubbard. Left defensive end Cameron Jordan is a three-time Pro Bowler and was first-team All-Pro last year, when he had 13 sacks. He had 59.5 in his first seven seasons and was shut out in the 48-40 opening loss to the Buccaneers.

“The thing he does well is he mixes it up every time,” Hubbard said. “That’s special. Some guys can be one-dimensional, but with him, he can mix it up and any time of the game. He can lull you to sleep. So you’ve just got to be well-prepared for him and be expecting what he has to bring to the table.”

“He is one of the better pass rushers in the league,” coach Hue Jackson said. “He is strong. He is quick. He is tenacious. He is one of those guys that comes to work every day, and in the game he plays hard. I think our players respect that. He is someone on their defense that we have to slow down to have success.”

The Saints could move Jordan to the other side on occasion to test undrafted rookie left tackle Desmond Harrison, but Hubbard said film study shows Jordan spends the majority of the time on the left side of the defense.

“So I’ll be blocking him the whole game basically,” he said.

The Browns signed Hubbard to a five-year, $36.5 million deal in March to handle this type of assignment.

“He has to get these guys blocked, and obviously there are some things we will do to assist as much as we can, but his No. 1 job is the blocking,” Jackson said. “This is a real challenge for us offensively with this defense on turf. We have to handle it.”

Defensive end Emmanuel Ogbah avoided the dreaded high ankle sprain when he was injured against the Steelers.

He didn’t practice Wednesday, but Jackson wasn’t ready to rule him out for Sunday. Even if he doesn’t play against the Saints, he’s likely to return Sept. 20 against the Jets or Sept. 30 against the Raiders.

** Linebacker Christian Kirksey (shoulder/ankle) was limited, but Jackson hopes he can play Sunday.

** Cornerback E.J. Gaines (knee) was limited after missing the opener but is expected to be ready Sunday.

Chris Smith will likely get the start in place of Ogbah, which would be the first in his five-year career. He played 35 games off the bench with the Jaguars and Bengals before signing with the Browns as a free agent in the offseason.

He played 57 snaps against the Steelers, taking most of Ogbah’s snaps in the second half and overtime. He had three tackles.

“I had a lot of plays, probably the most I ever had in my career, so probably even more this week,” Smith said, adding he should’ve had two sacks. “So that’s one thing about it, get my body in the right conditioning with having more reps, just being ready to go.”

Smith plays primarily on third down and bounces around the line, from end to tackle to nose tackle. He’ll see more time on first and second down and at end.

“When they brought me in I knew I’d be a rotational guy but I’m not worried about all that,” he said of the lack of attention he usually receives compared with Ogbah and Myles Garrett. “I always mess with them and say they get a lot of flash and stuff like that but I get out in the mud. That’s what I do. I just put my head down and work and whatever happens happens.”

Saints quarterback Drew Brees played for coach Marty Schottenheimer for four years in San Diego, starting with his second season in the league. Schottenheimer was coach of the Browns from 1984-88.

“Marty is probably one of the guys who has had the biggest influence on my career without question,” Brees said on a conference call. “I respect him so much. He just taught me a lot about how to lead and how to prepare.

“He was an intense, hard-nosed football coach. Each and every day, you had to come into the building ready to work. He expected a lot out of us. He expected a lot out of his quarterbacks, too. I appreciated that. At times, it was hard on me. I got benched three times during that period of time, too. Sometimes you learn things the hard way, but I love the man. He had a big influence on my career and in my life, and I just really appreciate it.”

They won a Super Bowl together, but the end wasn’t pretty between Saints coach Sean Payton and defensive coordinator Gregg Williams, who’s in his second year in that role with the Browns. Williams was the man behind the Bountygate scandal that got Payton suspended for the 2012 season.

When Williams returned to New Orleans in 2016 as coordinator with the Rams, the Saints scored 49 points in a blowout win, including a trick play for a touchdown in the fourth quarter. Payton was asked Wednesday on a conference call about his relationship with Williams.

“It sounds like a juicy question,” he said. “Listen, my relationship with Gregg is great. He was part of a championship we won one year. He has done a great job in Cleveland.

“I think this game is more about the Saints and the Browns and finding a way to win regardless of how many points it takes.”

Receiver Ricardo Louis is out for the season following offseason neck surgery but is with the team, on the mend and expects to play again.

Louis said he was injured lifting weights on the incline bench. He practiced during the offseason, but the decision was made to have surgery.