Notes: Kicker Zane Gonzalez pins “100 percent” on blame on himself, could be out of a job 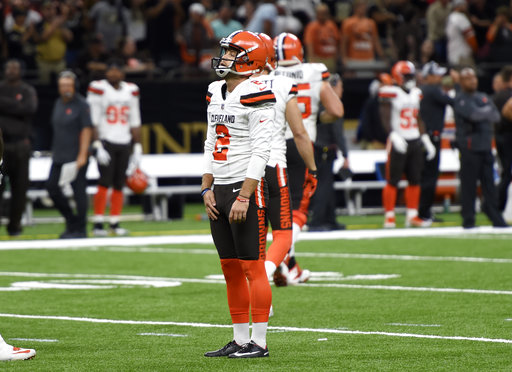 NEW ORLEANS — Zane Gonzalez planted his left leg, swung through with the right, watched the ball sail wide of the goal posts and dropped his head into his hands.

He spent way too much of Sunday doing that.

In the pristine conditions of the Mercedes-Benz Superdome, Gonzalez missed four kicks in the Browns’ 21-18 loss to the Saints.

When the final try had missed, a 52-yarder that would’ve forced overtime, he stayed on the bench after his teammates had left the field, head hanging low. He was consoled by Saints kicker Wil Lutz, who made the winner from 44 yards with 21 seconds left.

“It’s on me 100 percent. Can’t blame it on nobody else,” said Gonzalez, a seventh-round pick last year. “Sucks that we were so close to that win and it’s been so long and just let everybody down.”

The winless streak reached 19 games, and Gonzalez played a huge role. He made a pair of 39-yard field goals in the first half, then went 0-for-4 after halftime. He missed two 33-yard extra points, a 44-yard field goal and the 52-yarder.

The first three were hooked left. He pushed the last one.

“I’m not going to lie about it. Snowballed,” he said. “I was pulling them and that last one I just pushed it overcompensating.”

Every point is huge in a three-point loss, but the final two misses carried extra weight because of the timing. The extra point with 1:16 left would’ve given the Browns a 19-18 lead. The 52-yarder would’ve forced overtime.

Gonzalez, who went 15-for-20 on field goals and 25-for-26 on extra points as a rookie, said he’d never had a game like this. He might not get another chance, at least with the Browns. He also missed the potential winner from 43 yards in overtime in the opener.

General manager John Dorsey and coach Hue Jackson will consider a change before the game against the New York Jets on Thursday night at FirstEnergy Stadium.

The team was holding kicker tryouts Monday, a league source confirmed to The Chronicle-Telegram. Reportedly among the group were Blair Walsh and Cairo Santos, who have experience in the league. Santos kicked for Dorsey in Kansas City.

“I’m not going to speak on that because I can’t worry about that,” Gonzalez said. “Just need to get ready for Thursday at this point.”

Jackson said he talked to Gonzalez after each miss, telling him to keep his head up.

“I told him he was going to get a chance to make a kick that was going to win the game for us,” Jackson said. “And he had a couple opportunities.”

Second-year defensive tackle Larry Ogunjobi picked up where end Myles Garrett left off in the opening tie with Pittsburgh. Ogunjobi had two sacks, after one vs. the Steelers, and a third was negated by a penalty downfield.

“He did some good things. I think he’s growing,” Jackson said.

Ogunjobi’s sacks came on third down and were pivotal. The one in the second quarter went for an 11-yard loss, and Lutz missed a 44-yard field goal on the next play. The 10-yarder in the third quarter moved the Saints out of field goal range.

“It felt good but it would feel better if we won,” Ogunjobi said.

“But he did some good things, boy,” Jackson said. “Pushed the pocket, pushed some things and the fact they’re having to turn their line over there to him, it gives those guys inside more opportunities. So that’s great. It all works together.”

TWO ON THE ROAD

Mitchell had one forced fumble in the first 31 games of his five-year career.

“Made some plays, got the ball out and gave us a chance on offense, short field where we have to start taking more advantage of those things,” Jackson said.

After six takeaways in the opener, the Browns have eight in two games, their most to start the season since nine in 2001. They’ve scored only 10 points off the turnovers.

Landry played his first NFL game in his home state of Louisiana. He had five catches for 69 yards. He has at least five catches in 19 consecutive games, tied for second in NFL history.

“It’s a good feeling,” he said of playing close to home. “You know, I had a lot of emotions definitely in the beginning of the game. Just seeing the crowd, pretty much every time I looked in the stands I saw somebody I knew. It was a really good feeling.

“You just hate that it ended this way.”

** Defensive end Chris Smith made the first start of his five-year career, filling in for Emmanuel Ogbah, who injured his left ankle in the opener. Smith had four tackles.

** Linebacker James Burgess started in place of Christian Kirksey (ankle), who was ruled out Saturday and didn’t travel with the team. He had three tackles.

** The healthy scratches for the Browns were No. 3 quarterback Drew Stanton, defensive end Ifeadi Odenigbo and defensive tackle Devaroe Lawrence.

** Rookie offensive lineman Austin Corbett, the No. 33 pick, was active and played a little as an extra lineman. He was inactive for the opener.

TJ Carrie replaced Briean Boddy-Calhoun as the nickelback after the latter struggled in the opener. Carrie tied for the team lead with eight tackles and had a sack. He was called for pass interference in the end zone, setting up a Saints field goal.

** Linebacker Mychal Kendricks, who was released by the Browns last month after he admitted to insider trading, signed last week with the Seahawks. ESPN reported Sunday he’s been suspended by the NFL but will play Monday night while he appeals.