Baker Mayfield doesn’t care about being Browns starting QB No. 30 since 1999, says he “signed up” to save franchise 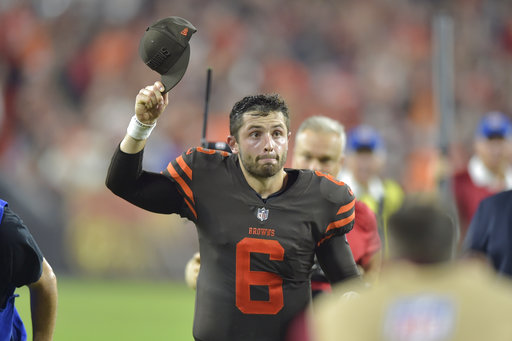 BEREA — Baker Mayfield doesn’t carry the burden of the Browns’ futility over the last 20 years, quickly dismissing a question about being the franchise’s 30th starting quarterback since it returned in 1999.

He welcomes the responsibility of being the man expected to lead the Browns out of the misery and into the glory.

“That’s what I signed up for,” he said. “I’m living my dream and I wouldn’t have it any other way. Without pressure, I don’t think this would be very much fun, without all the people watching and finding joy in this game. I love this game, and without the competitive nature, I wouldn’t enjoy it.”

Mayfield took his expected promotion to starter in stride. Coach Hue Jackson informed Mayfield and Tyrod Taylor — the starter the first three games — of his decision Monday morning, then Mayfield got extensive work with the first-team offense for the first time since being the No. 1 draft pick in April.

“It’s nice to get reps,” said Mayfield, who won the Heisman Trophy as a senior at Oklahoma. “To slowly build that timing and chemistry, you start to get into a rhythm.

“I’m happy with how I played without the reps and so right now I have very, very high expectations for myself having a full week of practice and being able to get the reps. We should be in tune by Sunday and be ready to go.”

Taylor remained in concussion protocol after leaving the game Thursday night against the Jets. Jackson said Taylor will be the backup if healthy, and there’s a “good chance” he’ll be cleared this week. Jackson added Taylor won’t be traded.

“He is not going anywhere. I think that is important,” Jackson said.

Mayfield earned the start by coming off the bench with a 14-0 deficit and leading the comeback to a 21-17 victory that snapped the franchise’s 19-game winless streak and improved the Browns to 1-1-1 this year. He went 17-for-23 passing for 201 yards, a sack and a 100.1 rating and caught a 2-point conversion on a trick play. The offense scored on four of his six possessions.

“He went out there into some tough situations, down 14 late in the second quarter, and handled all of that extremely well and went and played well. He checked off every box for me,” Jackson said. “I am not surprised by what he did in the game. I do not think that his teammates are. I do not think that the coaches are. I think that we knew, once he got his opportunity, he would go in there and nail it. That is what he did.”

Mayfield will make his first NFL start Sunday against the 0-3 Raiders in Oakland, Calif., becoming the 30th name on Cleveland’s infamous list of starting quarterbacks. Mayfield will be the seventh in Jackson’s two-plus years, but this switch feels different.

The organizational plan was for Mayfield to learn from the sideline. Taylor’s injury forced him into the lineup, and the offense’s struggles over the first 2½ games followed by Mayfield’s performance off the bench made his elevation to the starting role an easy decision.

“This is sooner than what I thought it would happen because I thought that we would have played much better earlier on offense. We did not,” Jackson said. “There was a stark difference in how we performed when he got in there. The young man went in there, and he earned the right to be the starter.”

Mayfield never hid his desire to play but accepted the decision to have him open the season on the bench. He said he wasn’t “stressing too much” while in the backup role but welcomed the change in status.

“It’s an honor. I wanted to be the starting quarterback,” he said. “I’m happy but it’s just the beginning.

“You’ve got to earn it. That’s why success is so much more fun when you have to work for it.”

Mayfield said the weekly routine he’s learned from Taylor and veteran No. 3 quarterback Drew Stanton won’t change, except he’ll add a meeting or two with the offensive line. He believes consistency is critical.

“Starter, backup, whether we’re winning or losing, I’m going to be that same person for these guys, and they can count on that,” Mayfield said.

He will increase his leadership role, which is required of the starting quarterback.

“That’s just who I am to be vocal, to express my feelings, my emotions, to lead with passion,” he said.

Tight end David Njoku said Mayfield is a natural leader and has no trouble commanding guys much older. Njoku said he did a double take when he heard Mayfield trash-talking for the first time Thursday night, getting into it with the Jets defensive line while showing a sense of humor.

“He was talking to the big boys. So he has heart,” Njoku said. “He’s not afraid, and that’s something we need. It’s very important.”

The atmosphere inside FirstEnergy Stadium went from dead to electric when Mayfield entered with 1:42 left in the half. The buzz lasted long after the victory was complete.

“Wonderful feeling. Can’t describe it,” receiver Rashard Higgins said. “The energy in the stadium was unbelievable.”

The win felt like the start of something for Mayfield and the franchise.

“I keep saying this is the Baker Era,” Higgins said. “If it pans out how it’s supposed to be, Baker might be the next big thing. He might be on the LeBron wall.”

Mayfield accepts the challenge and realizes the hard work it will take.

“We’re building a franchise here and we’re turning it around. It’s about culture.”

Hue Jackson won’t make QB decision official until Monday, but calls Baker Mayfield’s dazzling debut “as good as I thought live”
QB Tyrod Taylor cleared from concussion protocol and returns to practice, but his back injury could move Drew Stanton into backup role