Analysis: A win, a tie, Baker Mayfield and an evolving season prediction 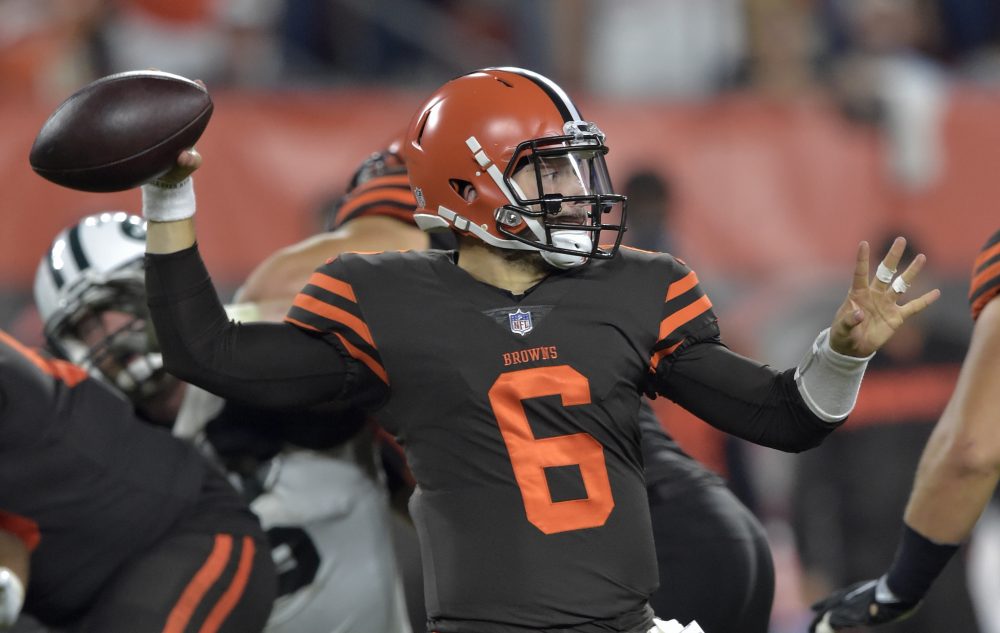 The game, the season and the franchise changed when Baker Mayfield entered against the Jets with 1:42 left in the second quarter Thursday night.

It’s Mayfield’s world now, and the rest of us are just living in it.

Coach Hue Jackson officially named Mayfield the starting quarterback Monday, so there’s no turning back. Mayfield wouldn’t have it any other way.

He said he doesn’t care about the Browns’ tortured quarterback history and that he “signed up” to change the culture and save the franchise from its seemingly endless run of futility. He doesn’t plan to alter his routine, attitude or approach in his new role.


Do the rest of us need to amend our expectations?

Besides completing an obstacle course 20 feet off the ground (don’t ask), checking in on a bunch of college and NFL games and being captivated by Tiger Woods ending a victory drought of his own, I spent a lot of time over the long weekend wondering how the sooner-than-anticipated quarterback switch will affect the rest of the season.

The three-game start doesn’t even reach the quarter pole of the season, but it’s a decent sample size and I believe I have a better feel for the overhauled roster and what it can do. But the key question is what Mayfield will do to the offense, the team and, most importantly, the record.

The Browns are 1-1-1 after being in every game until the end. Better play from benched quarterback Tyrod Taylor would’ve brought a win against the Steelers, instead of a 21-21 tie. And a made kick or two from Zane Gonzalez would’ve made the difference in the 21-18 loss to the Saints.

I hate leaping to conclusions, and I know it was only 31:42 of game action, but I’m convinced Mayfield is better right now than Taylor. The performance against the Jets was an extension of what he consistently demonstrated at Oklahoma and in the preseason. While there will certainly be bumps in the road, the intelligence, decision-making, command of the offense and accuracy aren’t going away.

Plain and simple, the better quarterback play I expect from Mayfield provides the chance for more wins in the final 13 games — a Baker’s dozen, as the team’s social media department astutely pointed out Tuesday.

Mayfield is supremely confident, and it’s contagious — to borrow a phrase from receiver Jarvis Landry. His teammates feel it and are inspired to play better.

“Just the work ethic he brings, the desire he has, the confidence he comes out in the huddle with — it only excels us in the huddle,” receiver Rashard Higgins said. “That’s what we look for in a quarterback, somebody to pick us up when we’re down and to tell us, ‘Hey, man. I’m the leader. I got y’all. Let’s do this.’”

I feel it’s fair to raise expectations for the rest of the season. Jackson said his were always high.

“I think we can win football games. I have said that since we started,” he said. “We need to play four quarters of Cleveland Browns football, and we have not done that yet. I think the best is still yet to come.”

Before the opener — it feels a lot longer than three weeks ago — I predicted six wins, which would still count as a significant turnaround from 1-15 and 0-16. I’m already pulling out the eraser.

The perceived difficulty of the schedule changes every week. But it doesn’t seem as tough as it once did with the Raiders (the opponent Sunday) and Texans 0-3 and the Falcons and Chargers 1-2.

I’m confident the Browns will be in just about every game and Mayfield will pull out his share.

So I’m going with a revised 7-8-1 finish, including contention late into the year in an AFC North that appears up for grabs, as Pittsburgh, Baltimore and Cincinnati have obvious flaws.

Of course, the Browns aren’t perfect. Landry’s the only sure thing at receiver, the offensive line has been leaky at times and tight end David Njoku drops too many passes.

But Cleveland is clearly better and Mayfield is another marked improvement.

“We are making him the starting quarterback because we believe that he can continue to grow, which helps the offense continue to grow and continue to get better,” Jackson said. “I think his best football is going to be ahead of him, but he just has to buckle down, put his head down and work his tail off. I am sure that he will do that.”

Maybe I’ll need to adjust my prediction again in another three weeks.

Browns rookie QB Baker Mayfield has ‘It,’ but just what is ‘It’ anyway?
Browns-Raiders Preview: 5 things to watch; 3 key numbers; the prediction