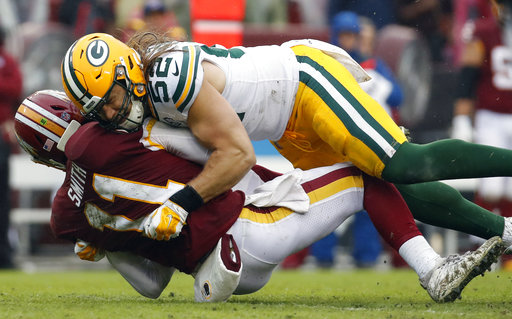 BEREA — The confusion is unanimous. So is the call for change.

The Browns joined players, coaches and media from around the league objecting to the roughing the passer penalties called on defenders for landing on the quarterback. The rule that states a defender is forbidden from landing with most or all of his body weight on the quarterback has been around for years but was made a point of emphasis this season.

Green Bay’s Clay Matthews was flagged in two straight games, and the reaction was strong that the penalties shouldn’t have been called.

“It was a clean hit, a good, firm hit,” Browns defensive end Chris Smith. “It is just crazy.”


“It’s definitely in the back of my head and in the back of a lot of players’ heads because they don’t want to hurt the team but then again it’s their career, it’s their job to tackle the quarterback,” defensive end Emmanuel Ogbah said. “They just have to do a good job of changing this rule or something.”

The Washington Post reported the rule won’t be changed but it will be called differently. NFL.com reported the competition committee will discuss it on a call next week but members were unsure if anything will be changed this season.

The Browns are holding out hope.

“I feel like they’re going to change some stuff, they’re definitely going to tweak it,” Ogbah said. “Yeah, hopefully before Sunday.”

“I feel like if enough people talk about it, possibly, but it is the league so you just never know,” defensive tackle Larry Ogunjobi said.

Left guard Joel Bitonio is just as confused as his defensive teammates.

“I guarantee you our players would rather take a penalty in a heartbeat than to get hurt,” coach Hue Jackson said. “Obviously everyone is trying to figure out the rule and how to do it better. Everybody wants to understand it. I think the league is doing everything they can.

“The players have to keep playing and do the things we are coaching them to do, and we will let everything else take care of itself.”

Jackson and Raiders coach Jon Gruden go way back. They were assistants at the University of Pacific in 1989, Jackson coaching running backs and special teams and Gruden the receivers.

Jackson said Gruden tried to hire him during Gruden’s first stint with the Raiders but Jackson stayed at USC. Jackson also coached with Jon’s brother Jay with the Bengals.

“I have always given Jon a lot of credit for where I am today because he helped mold me and shape me into the coach that I am a little bit,” Jackson said. “There are a lot of things that I took. At the same time, this weekend, I am trying to beat him.”

Ogbah returned to practice in a limited capacity and said he’ll play Sunday in Oakland after missing two games with a sprained ankle.

Ogbah can’t wait to rejoin end Myles Garrett and Ogunjobi in the sack parade. Garrett has four and Ogunjobi three.

“I told them I’m coming for them,” Ogbah said.

** Linebacker Christian Kirksey is also expected to play after missing two games with an ankle sprain. He was limited Wednesday.

Quarterback Tyrod Taylor remained in concussion protocol and didn’t practice, but Jackson was hopeful he’d be cleared and able to back up Baker Mayfield against the Raiders.

“We still have one more day,” Jackson said. “I think we are really on the back end of it. I think that there really is improvement. I think that we will know more tomorrow, for sure. I still feel good that he will be able to participate this weekend.”

** Free safety Damarious Randall (heel) didn’t practice and rode the stationary bike. He had a walking boot by his locker.

** Garrett (knee) was a full participant after not practicing Monday.

Jackson coached the Raiders to an 8-8 finish in 2011 in his only other stint as a head coach. He was fired after a year, then had to wait four years before the Browns hired him. He’s 2-32-1 in Cleveland.

“I would like to thank Al Davis for the opportunity that he gave me,” Jackson said of the late Pro Football Hall of Famer and Raiders owner. “Al Davis is somebody who is very important in my life and my ability to be where I am today. I thank Al for that and the organization for the opportunity, but they are no different than any other team that we play.”

Gruden was born in Sandusky, grew up in Ohio, went to the University of Dayton and said he was a huge fan of the Browns and running back Leroy Kelly.

“That was my team. My dad was a high school coach in Ohio at Galion High School. Went to watch the Browns in training camp every year,” he said. “I still have a Leroy Kelly autographed picture in my house. I love Ohio. Love Ohio football. I like the old uniforms better, I must say.”

** Bitonio said he’s not looking for carries after picking up a Mayfield fumble against the Jets and rambling down the field. The gain was erased because a player isn’t allowed to pick up another’s fumble and advance it in the final two minutes of a half.