Praising Baker Mayfield as a leader: Jon Gruden says he’s got “magic about him,” and Jarvis Landry says he “walk it like he talk it” 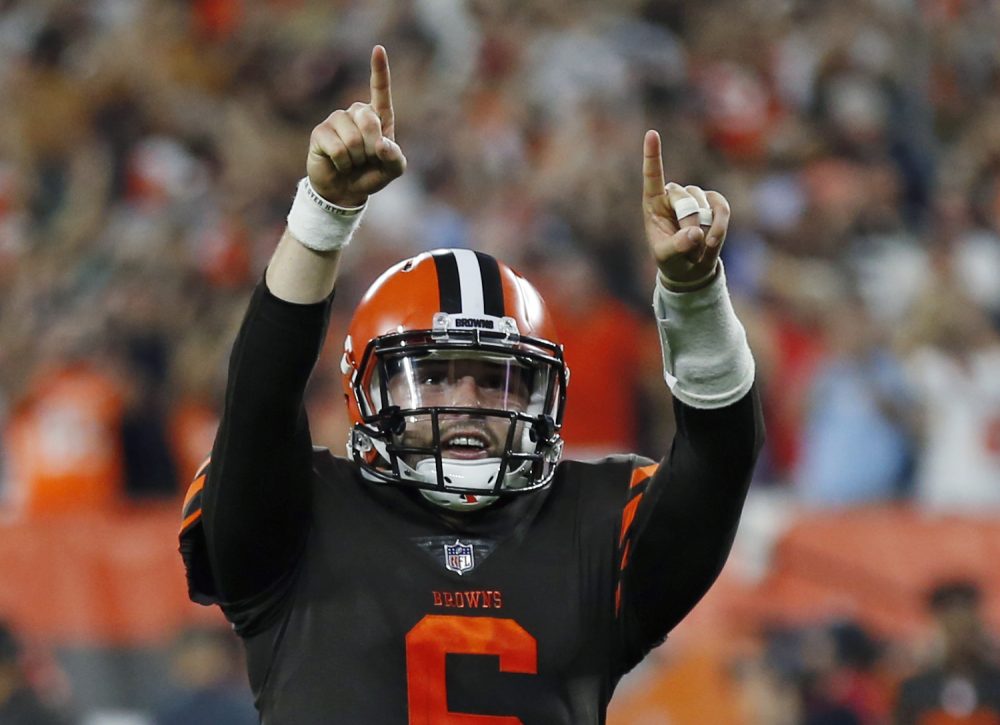 BEREA — Duke Johnson attributed Baker Mayfield’s gravitational pull in the locker room and the huddle to his “genuine” character.

“He’s a fun guy, a good guy to be around,” the running back said Wednesday. “When you’re a good person, people have a higher chance of gravitating toward you.”

“One thing I know about him: He walk it like he talk it,” Landry said. “That’s something that I appreciate and respect about him and he’s continued to do.”

The story of Mayfield preparing for his first NFL start Sunday against the Raiders in Oakland has many layers. An important one is a rookie No. 1 pick disproving myths about his personality, quickly earning the respect and trust of his older teammates and taking the leadership role required of his new job.

Raiders coach Jon Gruden said the desired intangibles are hard to find in a quarterback but obvious with Mayfield.

“But Mayfield has the magic about him, he has the charisma about him that really allows I think everybody on that team, defensively included, to play at a higher level. They know if we can get the ball back to this kid, something good’s going to happen.”

A chunk of the predraft conversation about Mayfield focused on a personality that rubbed some the wrong way. He had to answer questions about missteps at Oklahoma that included trying to run from the police while drunk, planting the Oklahoma flag at midfield of Ohio Stadium after beating the Buckeyes and grabbing his crotch during a win over Kansas.

General manager John Dorsey and coach Hue Jackson looked past the headlines, got to know Mayfield and were convinced he had the right demeanor to become the face of a franchise desperate for a change in culture and results.

“He has that magnetism about himself,” Jackson said. “He’s confident, and he likes to play. He has a leadership quality that a lot of people don’t have when it comes to leading men, and he’s not afraid to do that.”

Left guard and captain Joel Bitonio said he didn’t have any preconceived notions of Mayfield before he arrived.

“You hear people say, oh, he’s Johnny (Manziel) or he’s this or he’s that, but since I’ve known him he’s been a great guy, he’s worked hard, he’s been in the building, everything you want in a quarterback and that’s all you want,” Bitonio said. “He’s a confident guy. I think people see that as a little bit of cockiness, but he’s just confident in what he does and he understands you put in the work and he’s ready to compete and he’s ready to play.”

The flag plant in the Horseshoe didn’t go over well in the Buckeye State but earned fans elsewhere.

“I followed all that stuff, and it’s that ‘Walk it, Talk it,’” Landry said. “He definitely has that attitude and charisma, and that is contagious.

Landry never took issue with it.

“Oh, I loved it,” he said. “Especially from the quarterback position, you’ve got to love it. You don’t really see that. I loved it.”

Mayfield’s brash side was evident in his NFL debut last week against the Jets. He entered with the Browns trailing 14-0 and led them to a 21-17 victory that ended the 19-game winless streak. He went 17-for-23 for 201 yards, caught a 2-point conversion and found time to trash talk the Jets defensive line.

Middle linebacker Joe Schobert said every young quarterback he’s faced is too busy trying to stop his head from spinning to bark at the opponent. He said that’s a good sign for Mayfield.

“Just his competitive fire, and the kind of person he is and the edge he brings to the football field,” Schobert said. “He came in from Day 1 slinging the ball around, trying to make plays and obviously if he made a mistake or the defense got a play on him he came back and tried to make us look foolish the next play.”

Mayfield said Monday it’s important for him to remain consistent for his teammates.

“They need to see that I’m not going to change, no matter the circumstances,” he said. “Starter, backup, whether we’re winning or losing, I’m going to be that same person for these guys, and they can count on that.”

Gruden believes the Browns finally found what they’ve been looking for the past two decades.

“What they haven’t had is a frontline starter that really can make all the plays,” he said. “Put a line under that name. He’s the man. He’s the story that I think right now is going to become bigger and bigger in Cleveland this year.”

Browns didn’t choose Sam Darnold in April, but they’re looking to pick him Thursday night, continue stream of takeaways
Larry Ogunjobi, Myles Garrett know sacks inside and out and are in fierce, friendly competition to get to the QB