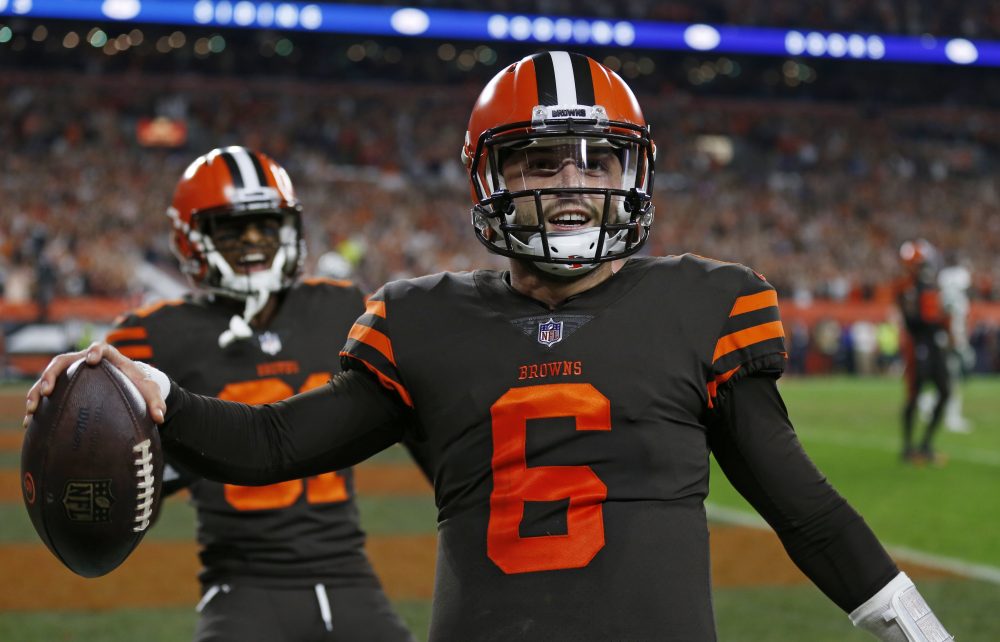 BEREA — The guy calling the plays on the sideline was just as impressed with Baker Mayfield’s execution of them as the 67,000 fans in the stands were.

“He did a terrific, terrific job and gave us a chance to win,” coordinator Todd Haley said Thursday of the 21-17 comeback victory a week ago against the Jets.

Unlike the fans chanting Mayfield’s name into the wee hours, Haley is tempering his expectations for the rookie quarterback’s first start Sunday in Oakland.

“Now, this is the real test,” he said. “I know a lot of people are carving the bust for Canton. He set the bar high. I do not know that every week is going to go like that went.”

Haley, who borrowed the Canton line from mentor and Hall of Fame coach Bill Parcells, said Mayfield’s performance off the bench against the Jets — 17-for-23 (73.9 percent) for 201 yards, 100.1 passer rating, 2-point conversion catch — isn’t a fair expectation moving forward.

“No, I just want to see him, like everybody else, continue to get better,” Haley said. “Throwing for 70-plus percent and making big plays, catching a ball for us, that was a small sample size. I have been around long enough to understand that there are going to be ups and downs.

“Baker is a little more of a gunslinger. He is going to rip it around a bunch. We just have to get him as much as possible without taking away that gunslinger attitude to make sure that he is doing smart things, not reckless or careless things. He did a couple in the game and got away with them. That is what we will be working on. It is great that he set a high standard. At the same time, I think that we are realistic.”

Haley started his coaching career in 1995 but said he’s never worked with a rookie quarterback who was a high selection, let alone the No. 1 pick like Mayfield. He drew parallels with former Cowboys Pro Bowler Tony Romo, who was undrafted.

“I was there when the transition happened in Dallas,” Haley said. “He is probably a pretty good comparison — some similar attitudes and similar kind of football savvy.”

After three starts by Tyrod Taylor, Haley said it’s only natural to tweak the game plan to better suit Mayfield, who’s less of a threat to run but more likely to throw downfield.

“We are not just plugging robots in,” Haley said. “The way that I have been taught and the way that I coach that has been very successful for me is trying to do your best as a coach to give your guys the best chance to succeed and do what they do well. When you are talking about the guy that touches the ball every snap, we are going to do the same.”

The offense against the Jets was atrocious before Mayfield entered with 1:42 left in the half after Taylor was forced to leave with a concussion. Taylor was 4-for-14 for 19 yards, sacked three times and hit several others, and the offense managed 74 yards and five first downs in six possessions.

Haley removed the blame from Taylor, placing “100 percent” on the inability to protect him early.

“I do not care whether it is him or Baker or Dan Marino, you get the quarterback hit through no fault of his own on the first five plays, it is going to be a struggle,” Haley said. “It was not a fair situation to put Tyrod in. That has been the talk this entire week for our entire group. We have to execute better early.

After his defense of Taylor, Haley was asked if it was difficult for him to sign off on the switch to Mayfield as the starter.

“I am going to choose to not talk about any of the internal stuff,” he said. “I like all of the guys, and I believe in all of the guys. Lastly, what I will say about Tyrod is he came in and has been a leader from Day 1 of this group and of this entire building. There was not this same excitement and prettiness to it right now, and he was and is a big part of getting this thing continued and going in the right direction.”

After months as a backup, Mayfield’s first extensive work with the first-team offense came this week.

“He has done a good job,” Haley said. “Obviously a big opportunity for him. He has stepped in and is working hard like he has been and getting an opportunity to try to get better.”

“Baker has been the same since the day that he has walked in, other than that he walks into the huddle with the first-team offense,” coach Hue Jackson said. “I do not see any difference in that way. I think that he is excited to play and excited to walk out there first.

“As far as his work ethic, I see him being a little bit more vocal with his teammates. Outside of that, I think that he has been the same Baker that he has been, which is good.”