Larry Ogunjobi, Myles Garrett know sacks inside and out and are in fierce, friendly competition to get to the QB 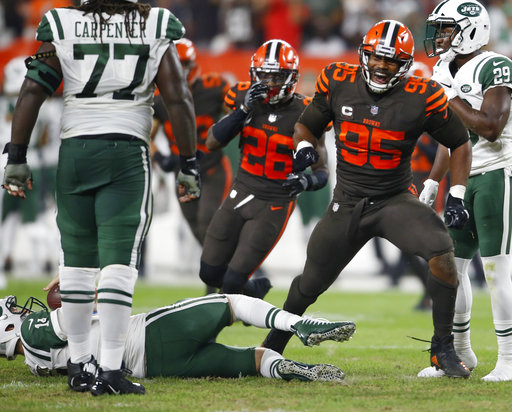 BEREA — Quarterbacks have had nowhere to hide against the Browns this season.

Step up in the pocket to get away from defensive end Myles Garrett, and defensive tackle Larry Ogunjobi is right there. Try to escape Ogunjobi and the pocket, and Garrett is waiting.

The Browns know the sack inside and out. 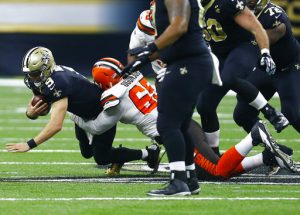 Garrett has four sacks — two each against the Steelers and Jets — sharing the NFL lead with Chicago’s Khalil Mack, Denver’s Von Miller and New Orleans’ Cameron Jordan. Ogunjobi is one behind, and had a fourth negated by a questionable penalty downfield.

The competition is heated, and that’s only talking about the pair of Browns.

“I love going against him every day, challenging him to do better. He challenges me,” Garrett said. “Just having somebody who you can rely on, depend on if you’re not there, he’s going to make the play. I know it’s gonna be a competition getting to the quarterback.”

“That is what it is all about,” Jackson said. “The competition in the room is great. Then you throw (rookie linebacker) Genard Avery in there and it really ratchets up even more because it is as important to him. He wants to be in that conversation every day.”

The competition may be fierce but it’s also friendly. Garrett and Ogunjobi were roommates as rookies and have a strong relationship.

“It’s pretty cool,” Ogunjobi said. “It’s just one of the things that we’re progressively getting better as we both play more. We’re playing more together. I feel like we’re just playing off each other.”

Their ability to collapse the pocket from different spots is a prime example.

“When he gets pressure up the middle, (the quarterback’s) not able to step up and get away from my rush,” Garrett said. “If I’m a good rusher, I’m trying to get to a certain point behind the tackle and then a certain yardage, and if Larry or any of the D-tackles keep him from stepping up, he’s going to be right at that point. And if I’m doing my job, I make him step up and he should be right there. So we work off each other.”

Garrett was the No. 1 pick last year, so his success was expected. Ogunjobi was a third-round pick out of Charlotte, so his quick ascension to starter and playmaker qualifies as a pleasant surprise.

“He’s a big, strong guy, very explosive,” Schobert said. “When he knew what he was doing and going in the right direction he could disrupt plays. You saw that last year and this year it’s been much more consistent and much more present.”

Ogunjobi (6-foot-3, 305 pounds) is highly driven to get the most out of his talent, impressing teammates with his work ethic. Garrett (6-4, 272) is motivated to be the best of all time, starting with being the league’s Defensive Player of the Year this season.

“We just have a good balance as far as how we play, we both want to make every play,” Ogunjobi said. “So I feel like other teams see that and they have to try to game-plan for one of us or both of us, but when they do they kinda leave openings for the other guys on defense.”

Left end Emmanuel Ogbah is back this week after missing two games with a sprained ankle. The Browns expect him to add another threat off the edge, but through three games it’s been all about Garrett and Ogunjobi.

“Larry gives them an inside rush, and they can move him in a lot of different positions,” Raiders coach Jon Gruden said. “You will see him head-up on the center. You will see him over the guard. He can get penetration and push inside.

“Garrett, he is just a very good athlete. He can get on the edge and really create some problems. They do an excellent job.”

Praising Baker Mayfield as a leader: Jon Gruden says he’s got “magic about him,” and Jarvis Landry says he “walk it like he talk it”
Defense has mastered the turnover turnaround, and is looking to take next step with touchdowns