QB Tyrod Taylor cleared from concussion protocol and returns to practice, but his back injury could move Drew Stanton into backup role 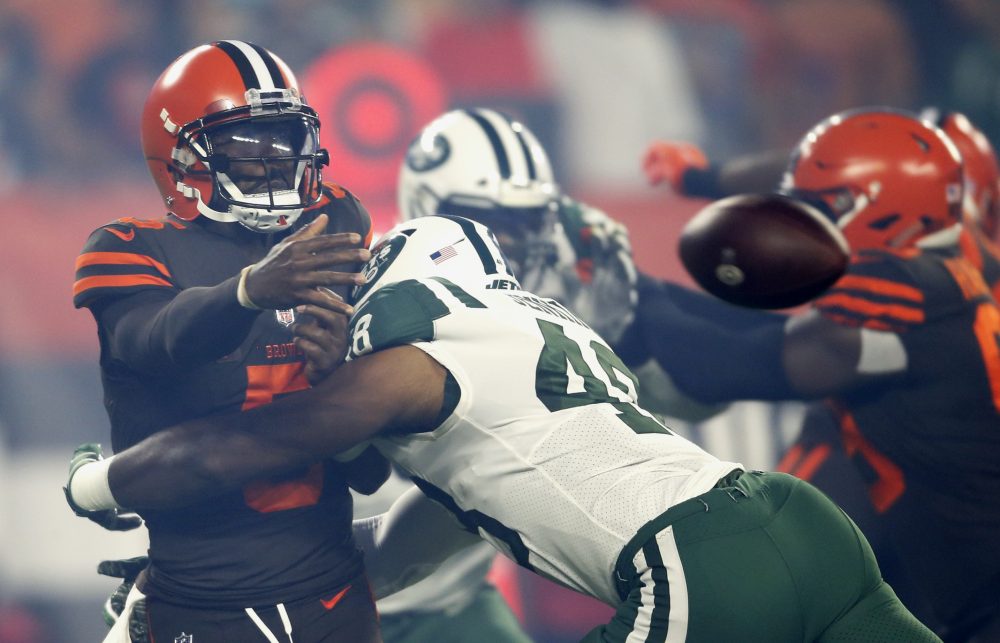 BEREA — Quarterback Tyrod Taylor was cleared from the NFL’s concussion protocol and returned to practice Thursday morning, but his status for Sunday’s game in Oakland remained uncertain.

Taylor didn’t do much in practice, as he’s dealing with a back injury also suffered Sept. 20 against the Jets. He was sacked three times and hit repeatedly in less than a half. He exited the game after the side of his helmet bounced off the ground at FirstEnergy Stadium on the final sack and was diagnosed with a concussion.

“The fact that he was back out there is a positive sign,” coach Hue Jackson said. “I will make sure that if we do put him out there that he is ready to go.”

No. 1 pick Baker Mayfield was named the starter Monday and Jackson said Taylor would be the backup if healthy. Jackson expected to make a decision Friday between Taylor and veteran Drew Stanton for the No. 2 role against the Raiders. The team is scheduled to leave for the West Coast about 2 p.m.

“I am sure that I will make it before we go because I want to know,” Jackson said. “I think what is important is for our team to know exactly where we are at backup quarterback.”

Taylor declined to talk to reporters when approached in the locker room, saying he had to get to a meeting, but said he was feeling well.

Stanton was drafted in the second round in 2007 and is 11-6 as a starter, including 3-1 last year with Arizona. He was inactive the first three weeks with Mayfield the backup to Taylor but said his preparation stays the same if he moves up a spot on the depth chart.

“That’s the biggest thing I’ve been trying to show Baker, is that your routine doesn’t change,” Stanton said. “I’ve had the same regimen for seven, eight years now and feel comfortable with it. If they ask me to be the backup or they ask me to play, I’m cool with all that.

“I’ve been one play away for the past nine years now so the flip side of not being in uniform is what’s different for me. So if it happens, I’ll be ready.”

Stanton, 34, was signed to help mentor Mayfield, and Jackson said they have a “big brother, little brother” relationship that both embraced.

“He has been tremendous. He is a unique, unique quarterback,” coordinator Todd Haley said of Stanton. “He has insight that I have not seen from very many guys. And not so much that, because there have been some really smart guys that I have been around, he has a unique feel for how to deal with Tyrod and how he deals with the young guys.”

Baker Mayfield doesn’t care about being Browns starting QB No. 30 since 1999, says he “signed up” to save franchise
Coordinator Todd Haley says Baker Mayfield did “terrific job” against Jets but calls 1st start “the real test”