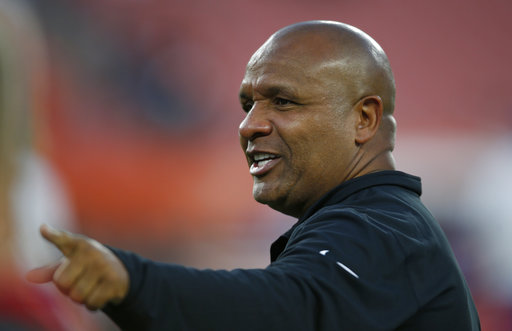 The Browns were in unfamiliar territory this week. For the first time in 21 months, they were preparing for a game after a win.

“Just stay focused, stay hungry, understanding that they’re not just going to lay down for us, we have to go after what we want and grab it,” defensive tackle Larry Ogunjobi said. “Go out there and take it. So the biggest thing is honing in on the fundamentals, staying focused on the little things and not beating ourselves.”

The Browns had extra time to enjoy and move past the 21-17 win over the Jets on Sept. 20. They appreciate what a second straight win would do for a team that had gone 19 games without a victory and hasn’t won two straight since 2014.

“It’s really important, you want to continue to have that strong momentum, want to keep the train rolling, per se,” Ogunjobi said. “We just have to go out there and continue to find ways to play really well and find a way to win.”


Coach Hue Jackson’s been in this situation only once in his two-plus years with the Browns — after they beat the Chargers on Dec. 24, 2016. But there was only one game left in a season long lost. At 1-1-1, this season contains plenty of possibilities.

“As I told our football team, we need to make sure that, one, we need to always be focused; but, two, there is a whole other level of focus now,” he said. “You are not sliding in here under the radar with people thinking you are not a good team. I think we have a team that if we keep growing and keep getting better that someday people will say that we are a good team. We are not that yet.”

Receiver Jarvis Landry entered the season talking about playoffs and championships. He said they’ve done a lot of “great things” in the first three weeks, especially on defense, and his hopes remain high.

“We’re a growing team. For a lot of us, it’s the first time being on the field together in an actual game,” he said. “Those first two games, we had our opportunities there, big opportunities to be sitting in a pretty position right now that we didn’t take advantage of but we learned from.

“Hopefully having that ‘W’ then going on the road right now is going to give us the confidence that we need to create the streak here.”

Quarterback Tyrod Taylor did more in practice Friday as he deals with a back injury and made the trip to Oakland but was listed as questionable on the official injury report.

Jackson had said Taylor would be the backup to Baker Mayfield if healthy, but veteran Drew Stanton prepared during the week and could get the call if Taylor is deemed not ready.

Taylor started the first three games but suffered a concussion and back injury Sept. 20 in the win over the Jets. He was cleared from the league’s concussion protocol in time to practice Thursday but didn’t do much because of the back.

Stanton, 34, is 11-6 as a starter, including 3-1 last year with Arizona. He was inactive the first three weeks with Mayfield the backup to Taylor.

Randall practiced in a limited capacity Friday after missing the rest of the week. He’s likely to start but if he has a setback or can’t finish the game, Briean Boddy-Calhoun would replace him.

“I trust Boddy a bunch,” coordinator Gregg Williams said Friday on a conference call. “No qualms at all about Boddy playing. He is a smart, tough football player.”

Oakland-Alameda County Stadium is a throwback, the only facility left in the NFL that also houses a baseball team. The dirt infield from the baseball diamond makes life difficult for football players unfamiliar.

“The biggest thing that we have to continue to worry about is that field,” said nickelback TJ Carrie, who spent the last four years with the Raiders. “That’s going to be something that we definitely have to be conscious of, because Oakland will definitely use that as an advantage.”

Jackson coached in Oakland for a year and plans to take his team to the stadium Saturday to get acclimated.

“You better know the dirt,” he said. “You can slip if you have not been on it before. You do not want the first third down to be a receiver running a route and he slips down because he does not know how to get his feet in the ground the right way.

“We are going to have to run around to make sure that they have the right shoes, so that when Sunday comes there are no excuses about the field.”

The Raiders have only three sacks, ranking last in the league in sacks per pass play. It’s safe to say they miss Khalil Mack, the 2016 Defensive Player of the Year they traded to the Bears because he was holding out in a contract dispute. Mack has four sacks, an interception for a touchdown, three forced fumbles and a fumble recovery in three games with Chicago.

“It is a big game-planning nightmare when you have to play against that guy, and to not have him in there is big for us,” left guard Joel Bitonio said.

DO NOT GO GENTLE INTO THAT SACK

“I’m not willing to tear something to lay him on the ground like he’s a child,” Garrett said. “Football is about getting hit and taking hits and giving hits. So if I get a penalty for saving my skin and trying to make big plays, then oh well.”

Mayfield was named NFL Rookie of the Week for leading the comeback win over the Jets. He went 17-for-23 for 201 yards.

** Carrie grew up in California, played four years for the Raiders and had 70 ticket requests early in the week.

“It’s definitely going to be a lot of high emotions,” he said.