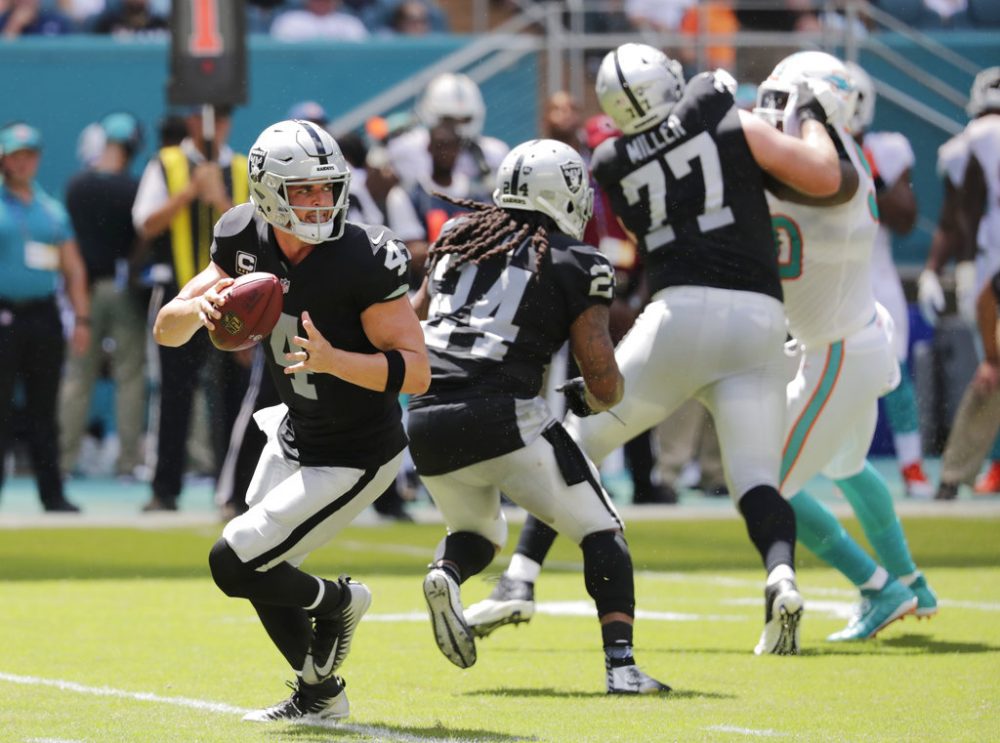 Derek Carr doesn’t miss often. When he does, it can be disastrous.

That’s good for the Browns.

The Raiders quarterback was the first in NFL history to complete 90 percent in a game with at least 30 attempts, going 29-for-32 in a Week 2 loss to the Broncos. He’s second in the league with a 76.6 completion percentage through Oakland’s 0-3 start — New Orleans’ Drew Brees is at 80.6 — but five of his 26 incompletions have been intercepted.

That’s music to the ears of a Browns defense with a league-leading 11 takeaways, including five interceptions.

“Derek is doing great,” Oakland coach Jon Gruden said. “We just have to eliminate a few decisions that are really in the way of us having a different record and a different outcome. He is the strength of this football team.”

Carr’s 88.3 rating ranks 20th in the league and he’s 31st with a 1.8 touchdown percentage and 29th with a 4.5 interception percentage. His 50.5 rating in the fourth quarter is 32nd. But he has thrown for 936 yards and two touchdowns, and the Browns appreciate the challenge he presents, especially with the Raiders already having 100-yard receiving games from three players: receivers Jordy Nelson and Amari Cooper and tight end Jared Cook.

“It makes you be sound all around,” defensive coordinator Gregg Williams said of the multiple threats. “It really kind of takes the trick mechanism out of what your thought process is.”

Myles Garrett had two sacks in the opener, Ogunjobi followed with two in Week 2 and Garrett had two again last week. The string of deuces will end at some point, but the end-tackle combination of Garrett and Ogunjobi appears here to stay.

“Now that we’re both on the field, we’re both playing, we’re both healthy, I feel like we’re just playing off each other,” Ogunjobi said.

Garrett is tied for the NFL lead with four sacks. He has 11 in the first 14 games of his career, tied for 10th in NFL history and the most in franchise history. Ogunjobi has three sacks and 18 tackles in three games after a sack and 32 tackles all of his rookie season in 2017.

With left end Emmanuel Ogbah back this week after missing two games with a sprained ankle, the dynamic duo could turn into a terrific trio.

“I told them, I’m coming for them,” said Ogbah, who had 9.5 sacks in his first two seasons.

Coach Hue Jackson would love a four-quarter effort that doesn’t have him sweating until the final seconds. More likely is another heart-pounding finish that could require a fourth comeback in four games.

The Raiders have been good early — they haven’t trailed in the first half this season. They’ve been awful late — getting outscored 57-10 in the fourth quarter on their way to 0-3. The Browns have struggled early offensively and trailed by 14 in their tie and win.

“If you want to be a good group, you better start fast,” coordinator Todd Haley said. “We need to execute and do our job better earlier in games. It can’t take us a quarter and a half for guys to settle in.”

Jackson said his team can’t afford to be fooled by the Raiders’ record and can’t let them start fast for a fourth straight game.

“When we watch them on tape, it does not say that they are an 0-3 football team,” he said. “Their offense has moved up and down the field on everybody. Their defense has slowed everybody down.

“We have to reverse that. We have to play well early. We have got to take them out of their comfort zone. That is something they have known now for three weeks. We have to change that.”

If the Browns don’t come ready to play, Oakland running back Marshawn Lynch will expose them. At age 32 and with a year of retirement in 2016, Lynch hasn’t changed. He runs really hard and punishes defenders.

“I have tremendous respect for Marshawn Lynch,” Williams said. “He is one of the best football players, running backs that in the 30 years I have been in the NFL have had a chance to see.

“His style of play is fun for me to watch. It is hard to coach against because he is a real violent runner, and he is still being able to perform at a high level.”

“Still Beast Mode. He still has it,” defensive end Chris Smith said. “He is a guy that you can’t hit him up high. Guys try to hit him up high and they just bounce right off of him. He has not lost a step.”

With better special teams play, the Browns could be 3-0. The problems go well beyond Zane Gonzalez’s four missed kicks in New Orleans.

Gonzalez’s potential winner in overtime against the Steelers was blocked when Joel Bitonio was pushed backward. Britton Colquitt’s punt was blocked against the Jets when rookie Nick Chubb whiffed on a block. And the return game has been sabotaged by a string of penalties.

“Need to get better, no doubt about it,” Jackson said. “Hopefully everybody will chip in and hopefully this will be the start of a great week for us on special teams.”

Kicker Greg Joseph will be in the spotlight again in his second NFL game. He made two field goals and an extra point against the Jets, but it wasn’t always pretty.

“I loved him last week. I want to love him again this week,” Jackson said.

The Raiders have question marks, too. Their punter and long snapper are rookies and were joined this week by rookie kicker Matt McCrane.

“Now that I hear it like that, I am little concerned,” Gruden said. “But I am going to live in my hopes and not in my fears.”

The hype machine really gets cranking after Baker Mayfield refuses to be swallowed by Black Hole. Browns 27, Raiders 20.