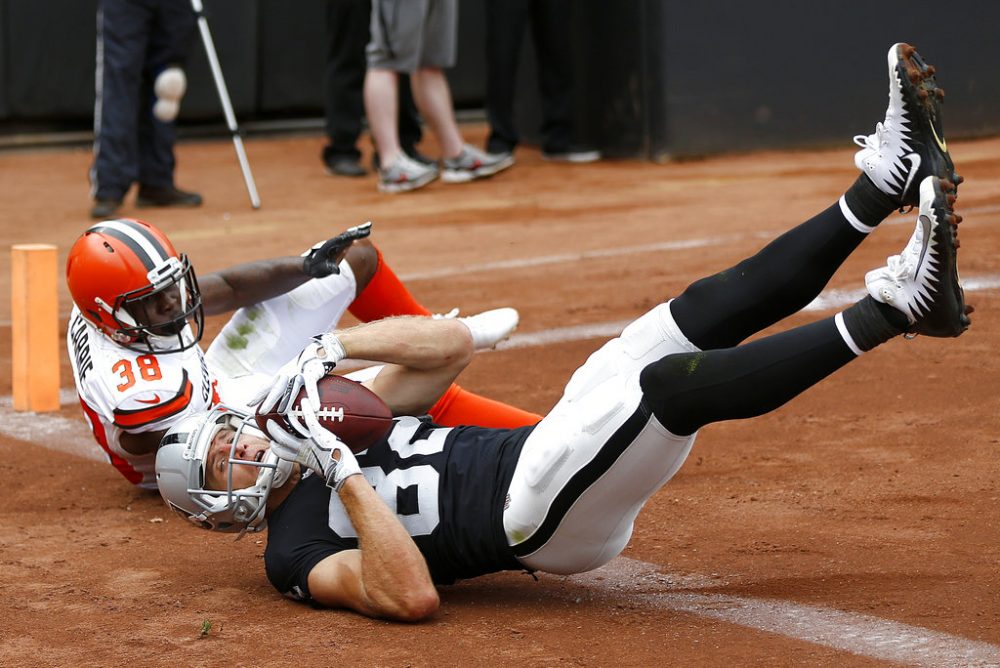 Hue Jackson was all scowls and frowns.

After nine years in the broadcast booth, three straight weeks of blown second-half leads and a roller-coaster game that featured three lead changes and 38 points after the start of the fourth quarter, Gruden finally won his first game in 3,591 days.

Derek Carr threw four TD passes and a game-tying 2-point conversion with 30 seconds left in regulation to set up McCrane’s 29-yard field goal in overtime that gave the Raiders a come-from-behind 45-42 win over the Cleveland Browns on Sunday.

McCrane missed a 50-yard field goal on the opening possession of overtime in his NFL debut and a 47-yarder earlier in the game before getting another chance when Carr drove the Raiders (1-3) back down the field again after a defensive stop for the winner with 1:46 left in the period.

“As soon as I saw it, it was an exciting feeling,” McCrane said. “I’ve been working hard. It’s something that I wanted as a kid, to play in the National Football League.”

The field goal dealt the Browns (1-2-1) another tough loss as they blew a 14-point lead in the second half and then allowed the Raiders to get the tying TD and 2-point conversion in the final seconds of regulation to spoil Baker Mayfield’s NFL starting debut .

Mayfield, the No. 1 overall pick, threw for 295 yards and two touchdowns to put Cleveland in position to win but also committed four turnovers, losing two fumbles and throwing two interceptions, including one that Gareon Conley returned 36 yards for a TD .

The Browns were seeking their first back-to-back wins since November 2014 after snapping a 19-game winless streak by beating the Jets last week.

The Browns broke out to a 28-14 lead midway through the third quarter only to fall behind 34-28 early in the fourth thanks in part to Mayfield losing two fumbles deep in his own territory to set up TD passes by Carr.

But the Raiders squandered a fourth-quarter lead for the second straight week, falling behind 42-34 after Mayfield’s 59-yard pass to Antonio Callaway set up Carlos Hyde’s 1-yard run and rookie Nick Chubb ran 41 yards for his second long TD of the game.

It looked as if that would decide the game when the Browns forced Carr into two incompletions from the 9 with under two minutes left to lead to a turnover on downs.

Cleveland appeared to be in position to run out the clock when Hyde converted a first down, but a replay review determined he was down just short of the marker and the Browns punted.

Carr then engineered a 53-yard touchdown drive capped by a 7-yard pass to Jared Cook with 30 seconds to play. The Raiders still needed the 2-point conversion to tie it and they got it when Jordy Nelson came down with a fade despite physical coverage by ex-Raider TJ Carrie.

Carr has 14 fourth-quarter comebacks but just two since his breakthrough season in 2016 when he did it seven times.

“It did feel like the old times,” he said. “The way we did that, it helps our team going forward to know what it takes.”

Chubb had just three carries on the day, but the first went for a 63-yard score in the second quarter and the last went for 41 yards and another TD. He finished with three carries for 105 yards.

Jackson went for a 2-point conversion twice in the first half. Mayfield’s pass to Callaway was incomplete on the first attempt before Duke Johnson ran in the second try to make it 17-7.

The Raiders were upset by a quick whistle that possibly cost Lynch a long TD run. Lynch ran left and linebacker Joe Schobert tried to tackle him but Lynch appeared to spin out of it without going to the ground. He kept running for what could have been a 75-yard TD but the play was blown dead.

The Browns were hurt by a quick whistle in the fourth quarter when Carr was ruled in the grasp, negating a fumble recovery that might have resulted in a TD.

Browns CB Terrance Mitchell left the game with a broken arm in the first half.

…  Raiders RT Donald Penn left in the second half with a leg injury and LG Kelechi Osemele also left with an undisclosed injury.