Hue Jackson believes latest loss, this team are different than those of previous 2 years, points to Baker Mayfield’s resilience as major reason 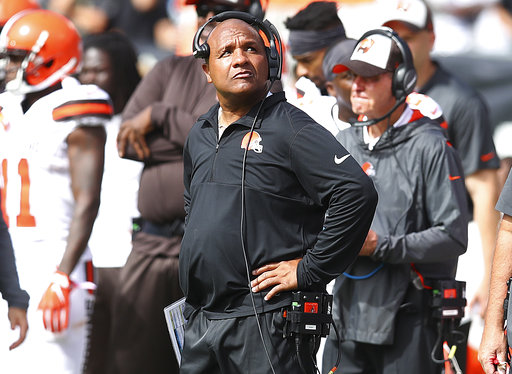 BEREA — For two years Hue Jackson could feel it as he stood on the sideline. The doubt creep into his players’ psyches after a mistake. The anxiety that something bad was destined to happen. The sense of resignation when a lead turned into a deficit.

“I have seen the air go out,” he said, making the sound effect.

For the 33rd time in 36 games as coach of the Browns, Jackson sat at the dais Monday and performed the autopsy on a loss, this time 45-42 in overtime at Oakland. Plenty of the defeats during the 1-15 and 0-16 seasons Jackson survived to make it to a third year were close and featured similar identifying marks — turnovers, a blown lead, a critical official’s call that didn’t go their way.

Jackson insisted this year is different. The 1-2-1 start isn’t part of the recurring nightmare; it’s the start of something much better.

“We have never been this close since I have been here, not as close as we have been in these four weeks,” he said. “This team feels different. This team is more talented. I do not think that there is any remains of the past teams.

“I know that we can feel that because some of the similarities are not finishing the game, but I can’t recall a game where we went down being on the road like that and came right back ahead — way ahead — and should have finished the game. That was different. It has been different all year. We are a better football team.”

The Browns led the Raiders 28-14 in the third quarter, but rookie quarterback Baker Mayfield fumbled on a strip sack and fumbled on a snap he wasn’t expecting. The Raiders turned the turnovers into 14 points and eventually took a 34-28 lead with 10:46 left in the fourth quarter.

The Browns went back in front but couldn’t hold the 42-34 lead, as a Raiders team that was outscored 37-3 in the fourth quarter in their 0-3 start got a touchdown and 2-point conversion with 30 seconds left to force overtime. The rally, despite the result, left Jackson encouraged.

“I get the sense that this is a team that is really starting to come together and understand how close they are,” he said. “I am really responsible for the process, but the players, they have to start being responsible for the outcome. The outcome is let’s go finish this and win the game. I think we will.”

Mayfield is a key reason. His confidence is contagious and his energy infectious. The No. 1 pick shook off an early pick-six and the two fumbles in his first start to lead the offense to 42 points, Cleveland’s most since 51 against the Bengals in Week 2 of 2007.

“He is energetic. He is positive. He is never going to let a bad play, a bad quarter or anything like that kind of get to him,” center JC Tretter said. “He is always expecting to make the next play. That is something the offense, the receivers, the offensive line and the running backs can all feed off of. Understanding that no matter what happened in the past, we are one play away from breaking it back wide open.”

Mayfield went 21-for-41 for 295 yards, two touchdowns, two interceptions, two fumbles, two sacks and a 70.7 rating. He was hurt by nine drops, according to Jackson’s count, and avoided sacks on a few occasions with pocket awareness, strength and agility. He made plenty of good throws, including a 49-yard touchdown over the middle to tight end Darren Fells.

He couldn’t get over the turnovers.

“I’m the quarterback of this team,” he said after the game. “It’s on me.

“We turned the ball over too many times, gave them a chance. In this league, when you turn the ball over like we did today, like I did, you’re not going to win those games. We saw the end result of that.”

Jackson said he “expects more” from Mayfield but absolved him of the blame for the first three turnovers. Receiver Antonio Callaway slipped on the interception returned for a touchdown, right guard Kevin Zeitler didn’t block Maurice Hurst well enough on the strip sack and Tretter misconstrued the silent count on the botched snap.

Jackson did wish Mayfield had thrown underneath rather than take a deep shot to Callaway on the interception with seven seconds left in regulation.

Most importantly, he loved how Mayfield handled the adversity.

“I am being very honest with you, I did not see any blink in Baker on any of those things,” he said. “That is what was very pleasing to me. I get a chance to look in his eyes, and he did not flinch. Matter of fact, he was like, ‘Come on, guys, let’s go.’ He put us in position again to have a chance to win that game. We just did not do it.”

The Browns had numerous chances to finish the win but failed. Jackson said they must learn to deliver the “knockout shot” when a team’s on the ropes and remove any doubt about the outcome.

The offense, defense and special teams all wasted opportunities to do just that. The offense needed a first down at the end of regulation and didn’t get it after the replay official overturned the original spot. The defense allowed two comebacks and 565 total yards. The special teams did nothing in the return game and allowed a 49-yard punt return.

“You just have to learn to put your foot on their throat,” Tretter said. “Everybody is too good to let a team kind of stick around.”

Jackson was more aggressive early, going for it on fourth down and trying three 2-point conversions, two of which worked.

“I told our team last week that I do not want to play with my hands behind my back anymore. I told them that from now on we are going to be as aggressive as we can be,” he said. “I want to change the mentality here. We are trying to defeat people, not just beat you.”

Jackson believes the latest loss will serve as motivation.

“We keep coming up short,” said rookie running back Nick Chubb, who had 63- and 41-yard touchdowns on three carries. “At some time point, we are going to get tired of it and just fight to the finish and going to find a way to win games.”

NFL defends game-changing decision to overturn first down by Browns in OT loss to Raiders
Brett Favre on SiriusXM Radio: Baker Mayfield is a “winner,” “can be great”