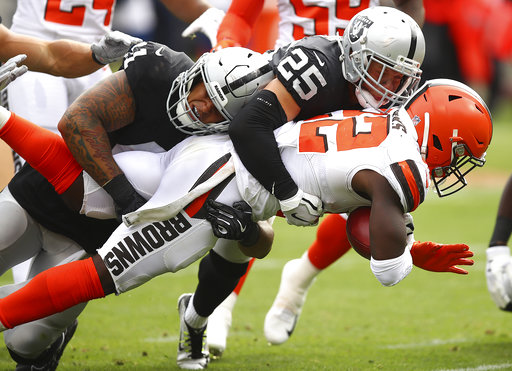 BEREA — Browns fans are often referred to as die-hard.

“So that’s one thing I notice about Cleveland sports, you guys are very, very wishy-washy,” he told The Chronicle-Telegram on Wednesday. “If it ain’t going right immediately, calling for heads, calling for jobs.”

Peppers, in his second season, is off to a slow start on defense and as a kick returner and said he’s heard about it from fans and media. He said he can’t shop at his local CVS without being harassed.

“And I understand that, because I put myself in their shoes, as well,” Peppers said. “It doesn’t bother me, but I just like to know the type of environment I’m in. That’s why I say that, man, because I know it’s a lot of people saying, ‘Oh, why is he back there? Blah, blah, blah, blah, blah.’ But then once I show them why I’m back there, now it’s, ‘Oh, yeah, yeah.’

“I know this is the National Football League, scrutiny is at an all-time high, you’re constantly under the microscope. It’s just part of the game that comes with it, but it’s just going to be funny to see once we get this thing rolling the way we’re supposed to.”

The startling aspect of the attacks is that they happen to his face. He can’t walk around downtown in peace.

“I try to be discreet and they walk up to me,” Peppers said. “I’m not a guy that walks around with security. And me, personally, I didn’t think I was playing well enough to get noticed yet, especially with the hoodies on and everything that I do.”

He said he doesn’t really check Twitter but understands he’s fair game — “That’s what Twitter’s for,” he said — and believes his college choice of Michigan contributes to the venom in Ohio State country.

“That definitely plays a part in it, as well,” he said. “Everything else comes with the territory.”

He was warned his “wishy-washy” comments could add to the grief he receives.

The criticism ramped up after the 45-42 overtime loss Sunday in Oakland. He returned four kickoffs for 64 yards with a long of 18 and none farther than the 25-yard line. He returned one punt for a yard and had two fair catches.

“It’s frustrating but I don’t really get too down on myself,” Peppers said. “As a return man, it’s a patience game and when you have your opportunity that’s when you have to hit. I know for a fact that we have the ability to have that big-play effect, we’ve just got to execute when we’ve got to execute.”

Peppers was the No. 25 pick last year and had a frustrating rookie season. He was forced to play out of position at free safety — lining up 25 yards downfield — and finished with 57 tackles, an interception, three passes defensed and a fumble recovery in 13 starts.

He’s at the more natural strong safety spot this year but shares time with Derrick Kindred and has played only 48.5 percent of the defensive snaps, as he’s dealt with cramps and minor injuries. He has 15 tackles and a fumble recovery, and had no official defensive stats in 37 snaps vs. the Raiders.

“I just got to take my opportunities when they present themselves on defense,” he said. “Try to be a force in the run and make plays on the ball when I can.”

Coach Hue Jackson remains confident Peppers will become the impact player he and the team think he can be.

“There is no question in my mind that he will get there,” Jackson said. “He has to continue to improve. We have a lot of football left to play. I think he is going to have a huge impact once it is all said and done.”

Peppers was great with the ball in his hands in high school and at Michigan — he was a Heisman Trophy finalist and played 53 snaps on offense and 154 on special teams — and told The Chronicle before the season he could rush for a “humble 800” yards if he were to go back to running back. But his lackluster returns (21.3-yard average on kickoffs, 4.3 on punts) are part of the awful special teams performance that’s played a role in the two losses and tie.

He blamed himself for not taking a touchback on one kickoff return Sunday and thinking he was in the end zone when he wasn’t on another. He insisted he isn’t discouraged.

“I’m not trippin’. I’m not built like that,” he said. “When it’s going wrong, what am I doing, what can we do well and what can we do better? And that’s all it comes down to, man, especially when the weather breaks, you get the flatter balls and no hang time, it’s plenty of opportunities to make my case and make our case and once we do that, it’s going to be funny to see how the narrative flips again.”

“Every game we’ve played in we had the opportunity to win. Me, personally, I think we’re better than every team we’ve played, we’ve just got to execute,” he said. “We know we have all the ability in the world, we know we have everything it takes to win, we’ve just gotta in the fourth quarter, when the going gets tough in this league, that’s when the money guys make their money. We’ve got to make those plays we’re supposed to make and execute the way we’re supposed to execute, and not give any more games away.”

Brett Favre on SiriusXM Radio: Baker Mayfield is a “winner,” “can be great”
Jabrill Peppers says he no longer goes out in public alone after harassment from fans but says hasn’t soured on Browns or city