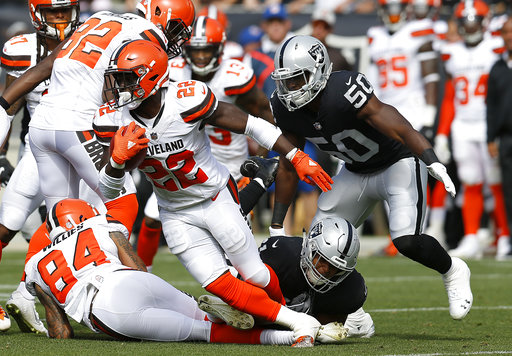 BEREA — The harassment from Browns fans has reached the point that Jabrill Peppers no longer feels comfortable venturing out in public alone.

“I definitely don’t go anywhere by myself anymore,” he said Thursday.

Peppers initially expressed his frustration with a segment of the fans Wednesday in an interview with The Chronicle-Telegram/BrownsZone.com. He called them “wishy-washy” for their quick criticism and said they’re aggressive toward him in public.

“I have no problem with verbal anything,” he said Thursday to a group of reporters. “But when you walk up on another man, that’s a hostile situation. For me, I have way more to lose than the average guy. So it puts me in kind of a funky situation where I can’t even go get daily toiletries or things without having to worry about something like that.”

He said the treatment crosses the line but wouldn’t get into details or specifics. He told The Chronicle on Wednesday a friend “had to pull me away one time.”

He said he tries to be discreet but continues to get recognized and approached.

“Every time I go out,” he said Thursday. “I’m not trying to … I want to keep the focus on the game.”

Peppers, a strong safety drafted No. 25 last year, said the behavior hasn’t soured him on Cleveland.

“Oh, no. Absolutely not,” he said. “I love the Browns. I love the city of Cleveland. I love how passionate the fans are and part of what I get is my fault. I’m not playing up to my potential and they see that, as well, so you can’t fault the people for feeling how they feel.

“You just gotta take it with a grain of salt and do what you gotta do to get better.”

Peppers, who turned 23 Thursday, went to the University of Michigan and believes that plays a role in how fans view him. He said he’s never talked about being a Wolverine in Buckeye country with former Browns receiver Braylon Edwards, who complained about a bias.

“Some people already feel a way about me because of my college choice, but you know I just gotta play better and make plays on the field and get them to like me,” Peppers said. “That’s how it is in the NFL.”

So his time at Michigan is a factor?

“A little bit of a factor, absolutely,” he said.

“Obviously I wasn’t talking about the fans as a whole — just more so the environment of an NFL franchise,” he said. “We understand the city of Cleveland loves their Browns and wants to see us get back to how it’s supposed to be. But that’s just the NFL. They love you when you’re doing good or not so much when you’re not.”

“I do not think that he means our fans, our die-hard Cleveland Browns fans, they have been with us through everything that we have been through,” Jackson said. “He has to take responsibility for that, and I am sure that he will. I just know the young man. I am not trying to defend him, but I know that, I am sure that, he did not mean it in the way that it came across.”

The criticism from fans is based on Peppers’ lack of production through the first year and a quarter of his career.

As a rookie he was forced to play out of position at free safety — lining up 25 yards downfield — and finished with 57 tackles, an interception, three passes defensed and a fumble recovery in 13 starts. He’s at the more comfortable strong safety spot this year but has played only 48.5 percent of the defensive snaps. He has 15 tackles and a fumble recovery, and had no official defensive stats in 37 snaps vs. the Raiders.

Much of the vitriol directed at him is for his play as a kick returner. He’s averaged only 4.3 yards on punt returns and 21.3 on kickoffs.

“That’s why I was brought here. That’s more of a thing that I’m talking about as far as me living up to my potential,” he said. “I feel like I’m playing better in that strong safety position. But I’ve been behind the 8-ball in the return game.”

He knows the way to silence the critics, and perhaps halt the harassment.

“Just play better,” he said. “That’s going to take care of it. So I’m not worried about it.”

He remains convinced he’ll live up to his first-round draft status.

“And as far as I’m concerned, we’ve got a lot more opportunities.”

Jackson said he could shake up the personnel on special teams after a disastrous four games, but Peppers hopes he gets another shot to return.

“I’m going to keep trying to continue to make my case,” he said. “Everyone wants the chance to bust one. Absolutely.

“We’ve just got to get on the same page. We gotta trust the blocks more, trust the returner more and just put it all together. We’re not far off. it looks way worse than it really is, it’s just a couple blocks here and there, a cut too soon or a cut too late, just little things.”

Peppers said he understands the frustration of the fans, and shares it. The Browns have had a chance to win every game but are 1-2-1.

“Absolutely. Definitely. But we’re frustrated as well,” he said. “When we’re constantly in games and in the end the ball doesn’t go our way, we’re more frustrated than anyone. But at the same token, you’ve got to turn it over, take the corrections, move onto next week and try to pull out a ‘W.’”

Peppers was asked about the reception he’ll get Sunday when the Ravens visit FirstEnergy Stadium.

“Hopefully I’m making enough plays where no one’s even thinking about it,” he said.