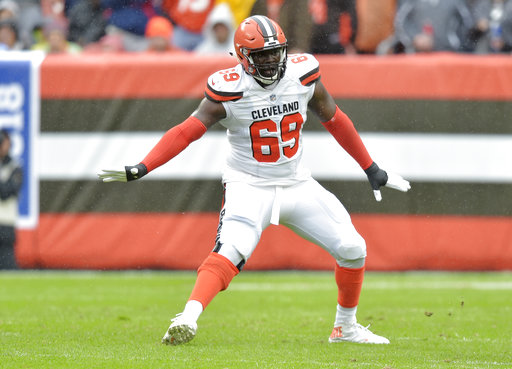 His name is Joe Thomas, who battled Suggs twice a year during his decade with the Browns.

Left guard Joel Bitonio set up a call Wednesday between the Browns’ last two opening-day starters at left tackle. Harrison said the chat with Thomas was brief but beneficial.

Harrison, an undrafted rookie out of West Georgia, will likely face his toughest test of the season against Suggs, who was the NFL’s Defensive Player of the Year in 2011 and continues to play at a Pro Bowl level. He has 128 career sacks, including 2.5 this year and 18 vs. the Browns. He’s forced 37 fumbles.

“We are trying to get him a crash course,” Bitonio said of Harrison. “Suggs is such a good player. He is a Hall of Famer.

“(Harrison) has slowly improved this year and he keeps getting better. It is a big test for him, so have to get a lot of film for him, get a lot of practice for him, but he is ready for the challenge and he is going to try to be his best this weekend.”

The lesson from Thomas wasn’t Suggs 101. It was at a graduate level.

“You can see it on film, but you won’t know how to attack it, so Joe’s just basically telling me how to attack it,” Harrison said. “I feel like it should be able to help me out a lot and be prepared for things that I don’t see on film.”

“He gets to his set point. I don’t think you’re going to see someone beat him with speed around the edge ever,” Bitonio said. “He can get out and he can move. It’s really impressive to see. Once he can get that power and understand that, that’s when he’s going to take it to the next level.”

Harrison was a surprise starter to open the season and had a rough first half of the opener against the Steelers with two false start penalties and several blocking breakdowns, including allowing a sack to Cameron Heyward. He hasn’t allowed a sack since and said he’s improved in all facets.

Learning the playbook was a priority, and Harrison said he spends a lot of extra time with offensive quality control coach Brian Braswell.

“He’s improved a lot. The first game, I think I was telling him every play — where to go to or trying to communicate with him,” Bitonio said. “He’s played in two pretty rowdy environments now and his (missed assignments) have gone way down, which is a big thing.”

“I have confidence in the kid,” he said. “He has been an exciting young player to watch.”

The Browns signed cornerback E.J. Gaines in March to play a significant role. His time has come.

Gaines will step into the starting lineup Sunday with Terrance Mitchell on injured reserve with a broken wrist.

“It will be exciting,” said Gaines, who signed a one-year, $4 million contract as a free agent. “It is my first game out here, and these fans are wild. I have not got to really perform in front of them yet so I am excited to do that for sure.”

Gaines came off the bench for Mitchell against the Raiders and had an interception and five tackles. He started all 36 games he played in his first four years, with the Rams and Bills.

“We feel very comfortable with him stepping in,” coach Hue Jackson said. “He is a veteran player. He has made plays. I think he has been waiting for this chance to walk out there first and show what he is worth. He is going to get that opportunity.”

Mitchell leaves a big void, as he was off to a strong start with 19 tackles, an interception, two passes defensed, two forced fumbles and a fumble recovery.

“Terrance, he is a great player,” Gaines said. “He has been making plays for this football team all year. That was hard to see that happen to him. It is up to me now to try to get in there and make some plays.”

Gaines said he’ll benefit from playing for coordinator Gregg Williams with the Rams.

GIVE HIM THE BALL

Haley doesn’t want to make his dad mad, so rookie running back Nick Chubb will get more carries against the Ravens.

Chubb rushed three times for 105 yards against the Raiders, including 63- and 41-yard touchdowns. He has 10 carries on the season for 146 yards, playing behind starter Carlos Hyde and third-down back Duke Johnson.

“It is a good problem because Carlos has done nothing but get stronger as each game has gone on,” Haley said. “Being with good backs for a long time, those guys need the carries. It is not as easy as saying, ‘All right, we need to split these carries,’ because he is our workhorse. But at the same time, we have a guy that is making huge plays, difference-making plays. Around here, I believe strongly in you earn the right to make plays, and he has certainly earned the right with a couple of those runs.”

Haley said Chubb was scheduled to get more playing time in Oakland but he was hesitant to use a rookie in certain situations. In hindsight, he wishes he would’ve used him more.

“Certainly you would say after the fact, ‘Man, the guy had 100-plus yards on three carries. We are the dumb-a,’” he said.

Receivers Jarvis Landry (knee) and Antonio Callaway (knee) and free safety Damarious Randall (heel) practiced in a limited capacity after sitting out Wednesday and are expected to play Sunday. Linebacker James Burgess (knee) was the only Browns player not to practice.

** The Browns elevated defensive tackle Brian Price (6-2, 322) from the practice squad and waived defensive lineman Devaroe Lawrence. Price has appeared in 10 NFL games with one start and nine tackles.

Lawrence appeared in one game and was inactive the past three. He was acquired in a trade Sept. 1, as the Browns sent a seventh-round pick to New Orleans.

** For the Ravens, running back Alex Collins (knee) and backup linebacker Za’Darius Smith (hamstring) were among those who didn’t practice.