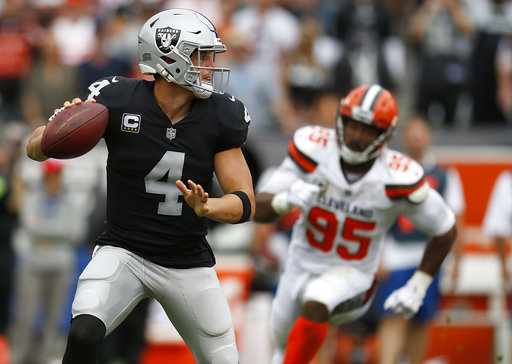 “It was killing me,” Garrett said Friday. “I think that I was making the hair on the back of his neck stand up. I could have grazed him a couple of times. I probably grabbed him or put my hand on his shoulder as he was releasing the ball.

The Raiders rallied from a 28-14 second-half deficit to take a lead, then came back from 42-34 in the final 88 seconds to force overtime. Coach Hue Jackson expects Garrett, the No. 1 pick in 2017, to make the clutch plays at the end of games.

“That is what your great players have to do,” Jackson said. “He gets it. They were chipping him and all kinds of stuff at that time.

“That is when those guys have to really rise up and make the plays. Our good players, our great players have to play great in those situations.”

Garrett said he always looks back and sees things he could’ve done better or differently but gave the credit to Carr for getting rid of the ball so quickly.

“In some of those situations, I thought like I had (the lineman) beat if I were given a little bit more time,” Garrett said.

Coordinator Gregg Williams said Garrett did all he could and was let down by mistakes in the coverage.

“The ball was supposed to be held a fraction longer,” Williams said. “We made two alignment errors on two of those plays that Myles is putting him down. That is why rush and coverage work hand in hand. It is very hard to do any more than Myles did on both of those plays, but the coverage part of it, one was alignment and one was just a technique thing that we do not let that happen. It caused a potential big play for us not to happen.”

The officials prevented another big play with 6½ minutes left in the fourth quarter. Garrett and rookie linebacker Genard Avery met at Carr and immediately the ball was knocked loose with defensive tackle Larry Ogunjobi recovering the fumble, but the official had prematurely called the play over with Carr’s forward progress stopped.

The league admitted Friday it was a fumble and the play should’ve continued. https://bit.ly/2QvlF1w

“For the life of me, I can’t understand that call,” Garrett said. “They called it down when the ball was floating into Larry’s hands.”

Garrett continued to play a ton of snaps, staying on the field for 87 of 92. He admitted to being fatigued at the finish.

“Try to tell yourself no until about the 89th play but we’ve got to suck it up and gotta go out there and win. That’s what it’s all about,” he said. “Nobody’s going to remember how tired you were or how you felt. Just gotta go out there and make that big play. And when you’re off the field you don’t have to worry about being tired.”

Garrett is fifth in the league with 4.5 sacks through four games but gave himself a B-minus/C-plus for the first quarter of the season. He had two sacks against the Steelers and Jets but said three is the only way to get an A for a game.

The Browns defenders believe they’ll be able to get home against Baltimore’s Joe Flacco on Sunday at FirstEnergy Stadium. He’s been sacked nine times and doesn’t get rid of the ball as fast as Carr.

“Carr’s one of the fastest getting it off and we were split-seconds away from getting to him, so we have to make sure we rush as well as we did last week and we should get there often,” Garrett said.

“Their offensive line, they’ve got some key players but it’s a lot of stuff that they do bad on my perspective when I’m rushing,” he said. “They give up the inside a lot. If you collapse the pocket and do your job, because Flacco holds the ball a long time, so in order to do that we’ve just got to do our job and opportunities will come up for sacks.”