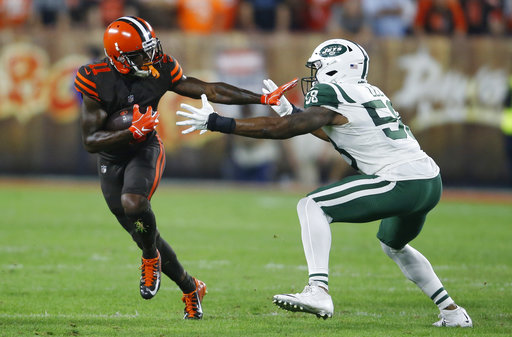 BEREA — Rookie receiver Antonio Callaway has played 50, 69 and 57 offensive snaps the last three games, an average of 79.6 percent, and coach Hue Jackson suggested Callaway and the team might be better served by a reduced role.

Callaway doesn’t think there’s too much on his plate.

Callaway wants to stay on the field but will fall in line with the coaches.

“I love being out there with them, with my brothers, but the coaches have a game plan. Gotta follow the game plan,” he said. “Whatever plan Coach Hue got, I’m just rolling with his plan.

“Coach Hue knows what he’s doing. As you see, day by day, we turn this franchise around, so I’m just following. I don’t want to be no bad apple, no bad seed. Whatever Coach says, that’s what it is.”

Callaway, a fourth-round pick, didn’t play last year after being suspended at Florida for his role in a credit card scam. He played only 15 snaps in the opener, but his responsibilities grew exponentially when Josh Gordon didn’t play in Week 2 and was subsequently traded.

Callaway (5-foot-11, 200 pounds) moved into the starting role and has 10 catches for 155 yards and a touchdown since being blanked in the opener. Almost all of the production has come in the second half of games (eight catches, 159 yards), following the pattern of the preseason opener, when he struggled early before finding his footing.

He was bad again early Sunday in the 45-42 overtime loss to the Raiders. He slipped on a route and had Baker Mayfield’s pass go off his hands for an interception returned for a touchdown. He also dropped a 2-point conversion and a bubble screen.

“Drops gonna happen,” Callaway said. “I ain’t worried about it.”

He caught two passes for 60 yards in the second half, including a 59-yarder to the 1 that set up a Carlos Hyde touchdown run.

“Yeah, it means a lot for the quarterback to still come to me after I had a few drops,” Callaway said.

Jackson would like him to be more consistent throughout the game.

“I do not have an explanation for it. I do not think that he does,” he said of the slow starts. “I just think that in those situations when you have not played, when you are just getting back into the groove and you are out there playing, here it is. The anxiety probably kicks in a little bit.

“I do not want to make it more than what it is because I think that he can make plays. He needs to make plays for us whenever we call his number. He understands that he needs to start faster for our football team.”

Callaway has first-round talent but dropped to the fourth round because of a series of off-field incidents, including a failed drug test at the scouting combine. Before his first preseason game he was cited for marijuana possession and driving with a suspended license after a traffic stop. He has pleaded not guilty, but the incident certainly added to any stress level in adjusting to the NFL.

No. 3 receiver Rashard Higgins, who could see more playing time if Jackson cuts Callaway’s reps, said Callaway has handled himself well off the field and can handle the workload on it.

“It could he hard but he’s the man for the job,” Higgins said. “The coaches wouldn’t put him in that predicament if they didn’t feel like he was ready, so we know he’s ready and he comes to work every day just like he’s a pro.”

“I think that he is a baller. I think he can play this game at a high level,” No. 1 receiver Jarvis Landry said. “We all go through that process of being unsure sometimes and not really understanding. It is our job to pick up the slack.

Callaway said he’ll play Sunday against the Ravens (3-1) after tweaking his knee against the Raiders and not practicing Monday. The injury came on the 59-yard catch-and-run on a crossing route that looked like it was going to be a 60-yard touchdown.

“I would like to see him finish that because he is fast enough to do that,” Jackson said.

“I had turned my knee a certain way and felt like a little thing,” he said. “I would’ve separated.”