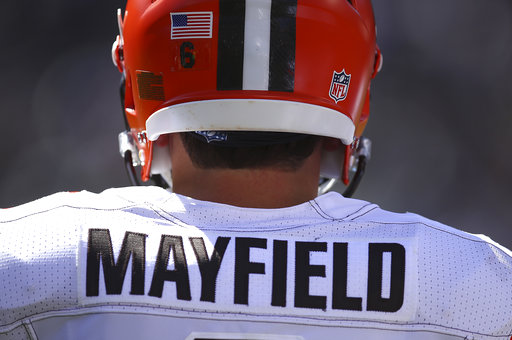 Baker Mayfield has never experienced anything like the Baltimore Ravens defense he’ll face Sunday in his first home start.

Sure, Mayfield dealt with, and handled, adversity in his first two NFL appearances. He came off the bench trailing the Jets by 14 points in his debut in prime time. He made his first start last week in the hostile environment of Oakland’s Black Hole and quickly threw a pick-six when receiver Antonio Callaway slipped and the pass deflected off his hands.

But those ordeals are tame compared with the challenge of the Ravens. Mayfield will peer across the line and spot pass rusher Terrell Suggs spitting fire, linebacker C.J. Mosley inching toward the line and free safety Eric Weddle moving around in an attempt to trick the rookie quarterback.

“Athletic. Talented. You see guys that want to intimidate you,” Mayfield said. “The Ravens defense is known for being physical and trying to outphysical the other team and set the tone for the whole game. On top of that, they can run. They have guys that can do it all.”


Mayfield is too confident to be in awe of or fear the Ravens. In the comeback win over the Jets and the heartbreaking 45-42 overtime loss to the Raiders, he’s 38-for-64 (59.4 percent) for 496 yards with two touchdowns, two interceptions, three sacks and an 81.3 rating.

He’s impressed teammates and opponents, as the 42 points were the most for the Browns since 2007.

“He made helluva throws,” receiver Jarvis Landry said. “Besides that, just the way he commanded the huddle and led us is something that I expected from him and his attitude and demeanor.”

Mayfield’s 295 yards were fifth in the Super Bowl era for a No. 1 pick in his first start, trailing Cam Newton, Vinny Testaverde, Andrew Luck and Peyton Manning.

“I like his swag, his edginess,” said Suggs, who has 18 sacks against the Browns. “As a fellow competitor, you have to respect that. I like his game and his fieriness — if that’s a word.”

It’s been at its best in the second half, allowing no touchdowns, nine points, a 47.9 passer rating and 123 yards a game — all best in the league.

“We have smart players,” coach John Harbaugh said. “They learn from play to play, and they communicate well. They are playing well. That is what it boils down to.”

The Ravens traditionally make life miserable on rookie quarterbacks. In 10 years under Harbaugh, they are 15-5 and lead the league by holding the rookies to a 59.6 passer rating with 27 interceptions, according to ESPN stats.

“Baker Mayfield is pretty advanced,” Harbaugh said. “He’s not, I don’t think, a rookie in the true sense. He seems like he has a really good feel for the game.”

The Ravens got deeper at cornerback this week with the return of Jimmy Smith off a suspension, but Mayfield must be most concerned with Weddle.

The five-time Pro Bowler has an interception in four straight games against the Browns and 29 in his career. He’s a master of disguising coverages.

“He is a pain in the butt because he is extremely smart and is able to camouflage a lot of looks and create issues that really should not be issues,” Browns offensive coordinator Todd Haley said. “I am really anxious to see how it plays out because I think that we have a chance to be pretty good offensively, if we can clean up some of the mental side of it.

“We are trying to have this group develop into a top-10, top-five group. I think we have the potential to do that.”

Ten times in 20 games under Harbaugh the Ravens — No. 1 in the league in opponent passer rating (69.1) and yards per pass attempt (5.31) — have held the Browns to 10 points or fewer. But this Cleveland offense looks and feels different than its inept ancestors. With Mayfield at the controls for a game and a half, the Browns have scored 63 points.

He hasn’t been perfect — two fumbles and an interception in the second half against the Raiders — and said the key to more improvement will be taking care of the ball and paying greater attention to details as a unit.

“We are very, very close to being a great team. That is it,” Mayfield said.

He has energized the team and fan base and inspired comparisons to all-time greats John Elway, Brett Favre and Drew Brees.

“I expect the same thing out of him,” receiver Rashard Higgins said. “I said he can be on the LeBron wall, so, sh–, that’s my quarterback, man.”

Landry said he “absolutely” believes Mayfield will fulfill Favre’s prediction of greatness, and he refused to push Mayfield to the background with second-year Chiefs quarterback Patrick Mahomes receiving the bulk of the national attention.

“I respect Pat, I’ve seen what he’s been doing, I knew him since he was in college and I’m proud of his success,” Landry said. “But we’ve got our Baker Mayfield. We’re not comparing him to anybody and he’s going to do the things that he does well, and I think we get an opportunity to play Kansas City this year, so we’ll see.”

The matchup with the Ravens is bigger than Mayfield. The Browns (1-2-1) have squandered opportunities for a better record and need several victories to validate the perceived improvement.

“If we are going to be the team that we want to be, we have to go in our stadium, play against these teams and find a way to defeat them,” coach Hue Jackson said. “That is what this is all about.”

“It is very, very big. It is big for us to just take that next step, it is big up in the division and in all reality we’re supposed to be 4-0,” free safety Damarious Randall said.

Mayfield’s looking forward to running out of the FirstEnergy Stadium tunnel for the first time as the starter.

“It will be exciting. I am hoping we get a good crowd atmosphere because this game is a division one,” he said. “For us, it counts as two. We need the fans to come alive. When they bring the energy, it helps our defense especially, but it helps out the momentum. You build confidence. Things start to flow after that, so looking for the crowd and hoping they bring it on Sunday.”

Myles Garrett made Raiders QB Derek Carr’s neck hair stand up but couldn’t take him down in key moments of OT loss
Hue Jackson relying on rookie receivers to help Jarvis Landry — “It is concerning, but you trust them”