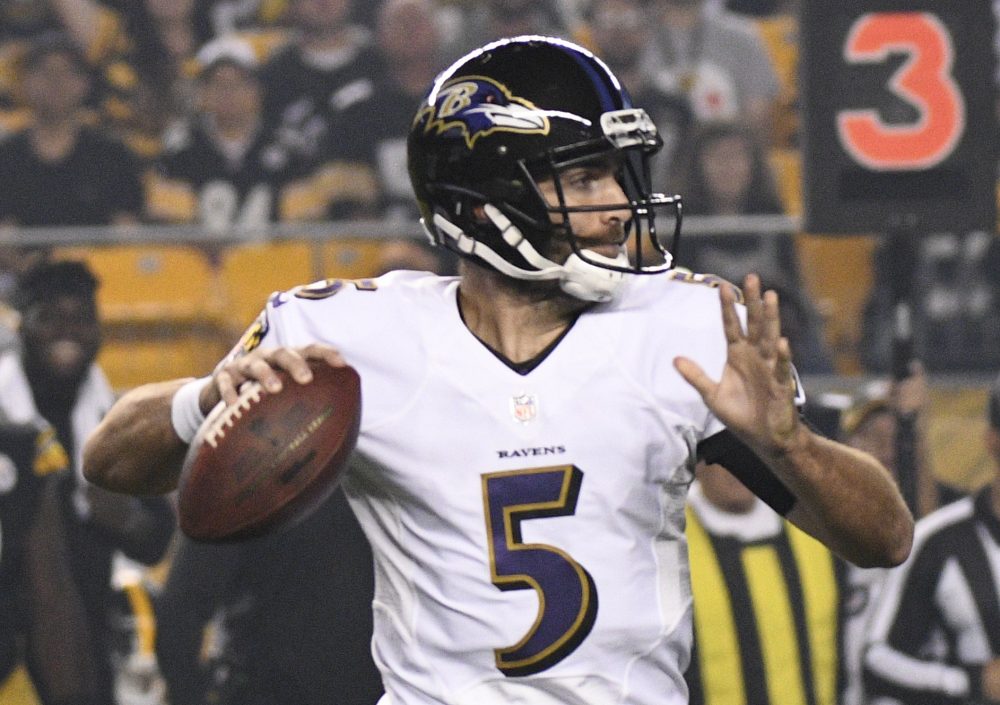 Ravens quarterback Joe Flacco is back to himself, and that’s not good for the Browns.

Flacco has had no trouble beating the Browns no matter the state of his game — he’s 17-2 in the rivalry — but his overall performance dipped over the last three years as he dealt with knee and back injuries, and as a result the Ravens haven’t been to the playoffs since 2014. Flacco’s improved play is a large reason for the Ravens’ 3-1 start, as he’s completed 64.3 percent for 1,252 yards, eight touchdowns and two interceptions for a 96.9 rating that ranks 14th in the league. His 113.3 rating on third down ranks fourth and he’s coming off a 363-yard performance in a win at Pittsburgh.

“Yeah, he definitely looks like he is back into his true form so he is definitely slinging the ball out there a lot more,” said Browns cornerback E.J. Gaines, who will replace Terrance Mitchell (broken wrist) in the starting lineup. “He has done well this year so we definitely can’t let him get comfortable back there.”

Flacco has benefited from a free agent overhaul of the receiver room. Speedster John Brown provides a deep threat, can take advantage of Flacco’s huge right arm and is third in the league with 22.5 yards a catch, while Michael Crabtree and Willie Snead move the chains with intermediate and underneath routes.

The Browns were complimentary of the new and improved Flacco and weapons but are confident they can make life difficult by pressuring him in the pocket. He’s not much of a scrambler and will hang onto the ball.

“Flacco holds the ball a long time, so we’ve just got to do our job and opportunities will come up for sacks,” rookie linebacker Genard Avery said.

The Browns defense can’t afford to concentrate its efforts solely on the wideouts. A strength of the Baltimore offense, and a favorite of Flacco, is the large and talented tight end group. Rookie first-rounder Hayden Hurst is expected to make his debut and join Nick Boyle (nine catches, 104 yards), Maxx Williams (12, 119) and rookie Mark Andrews (10, 119, one touchdown).

These numbers are scary for the Browns, who’ve had trouble the last two years stopping tight ends over the middle. The issue was obvious again last week against the Raiders, as Jared Cook had eight catches for 110 yards and two touchdowns.

“You can see the quarterback believes in them in throwing the ball to them,” defensive coordinator Gregg Williams said of the Ravens group, which he called the best in the league. “Yeah, it is a challenge, and we have to take some of the corrections from last week and transfer it into this game because there are some similarities.”

Linebackers Christian Kirksey, Joe Schobert and Jamie Collins will be the first line of defense, but may need help from safeties Jabrill Peppers and Damarious Randall and cornerback TJ Carrie.

“Each tight end has a different sort of skill set, and they find ways, they scheme ways to take advantage of it, so we really have to be on our p’s and q’s in that aspect,” Schobert said.

The Browns break down the season into quarters and wrapped up the first section at 1-2-1.

“We have to catch up now,” coach Hue Jackson said. “We dug a little hole. We have had some chances, some opportunities to win some games that we did not. So we feel like our backs are against the wall a little bit. We need the second quarter. We have to get going and play better football and get some wins.”

The key to better results over the final three quarters of the season will be an improved performance in the fourth quarter of games. While the Browns have had their moments — Josh Gordon’s touchdown against Pittsburgh, Antonio Callaway’s vs. New Orleans, the Baker Mayfield-led win over the Jets — they haven’t made enough plays in the clutch to put together a win streak. The latest, most painful example was last week against the Raiders when one more play on offense, defense or special teams could’ve changed the outcome.

The defense, which allowed the Raiders a touchdown and tying 2-point conversion in the final minute, believes a change of mindset is necessary.

“We’ve got to leave no doubt,” Randall said. “That’s been kind of frustrating throughout the whole year, that we haven’t been able to close a game as a whole team.”

Cleveland’s special teams have been brutal through four games, contributing heavily to the two losses and tie. It’s not a stretch to say the Browns would be 4-0 with better play by the kicking units. Things are so bad, Jackson was asked if he’d fire coordinator Amos Jones after only four games on the job. Jackson said no but took an increased role to help Jones.

“We have done some things different. I feel better about it,” Jackson said. “We just have to go do it on gameday. We made a few adjustments here and there.”

The Ravens will attack the weaknesses shown on film, including a blocked field goal, blocked punt, poor kick coverage and miserable returns. Coached by Jerry Rosburg, the Ravens have a top-five special teams unit every year and are led by kicker Justin Tucker, whose 90.2 field goal percentage is the best in NFL history. The Ravens have 13 blocked kicks since 2014 and 10 kick returns for touchdowns since 2011.

If the Browns didn’t figure out something during the week, it’s going to be a long day in the kicking game, and the disparity could decide the outcome.

The strength of the Browns offense is easy to spot. Rookie Nick Chubb, the third option at running back, rushed for 105 yards and two touchdowns last week on only three carries. He joins workhorse Carlos Hyde and versatile Duke Johnson to give coordinator Todd Haley an assortment of options, and the issue that presents.

“It is a good problem because Carlos has done nothing but get stronger as each game has gone on,” said Haley, who believes the best backs need the workload to stay in rhythm and wear down the defense.

The Browns are at or near the top of the league rankings in numerous rushing categories. They’re second overall (152.8 yards a game), second in attempts (32.3), tied for first with six rushes of 20 yards, tied for fifth with 17 of 10 yards and seventh with 29 first downs. Hyde is the only back in the NFL with a rushing touchdown in each game and shares the league lead with five. He leads the league with 83 carries, is sixth with 285 yards and tied for sixth with 15 rushing first downs.

But Chubb’s breakthrough against left Haley no choice but to include him more in the game plan. At 22 years, 277 days, Chubb became the youngest Browns player since Jim Brown in 1958 (22 years, 272 days) to rush for 100 yards and two touchdowns in a game.

“We need to do a better job of making sure that he has a series or two each half and go from there,” Jackson said. “Nick Chubb is going to carry the ball.”

Points scored in the Browns’ 45-42 overtime loss to the Raiders last week, the fourth-highest scoring game in franchise history

The record of Ravens coach John Harbaugh vs. the Browns, including 9-1 in Cleveland

Consecutive games for the Browns without a win inside the AFC North. The last win was at Baltimore in 2015.

The Ravens come in rolling, while the Browns are still learning to finish games. Ravens 24, Browns 23.