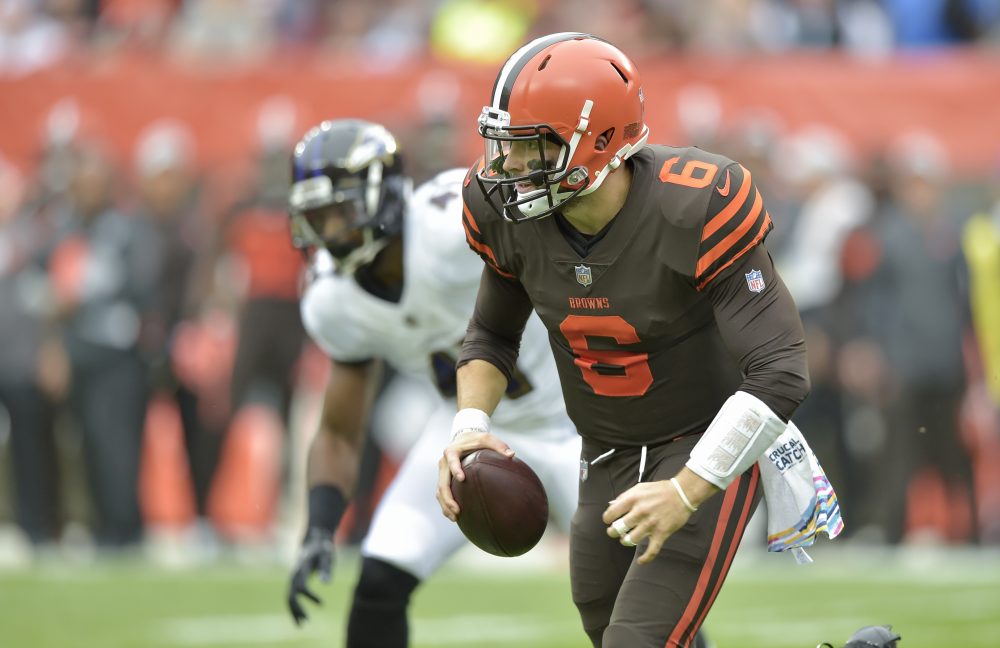 America’s most bats-in-the-belfry football team was at it again Sunday, in the Factory of Madness, where your — dare we say — emerging Cleveland Browns pulled overtime from the jaws of regulation and victory from the jaws of kissing your sister.


And they didn’t lose!

It was a cliff-hanging win over division rival Baltimore, by the Bronko Nagurski Appreciation Day score of 12-9. The winning points came as the overtime clock was ticking toward zero, on a Greg Joseph-launched low-flying scud missile that somehow careened through the uprights, barely clearing the crossbar, after being deflected at the line of scrimmage by a Ravens’ claw. The ball may have even been spinning sideways, it was hard to tell.

In other words, it was exactly the kind of cosmetics you’d expect from a game-winning field goal by the Browns.

He’s here, and good stuff is starting to happen. Go ahead, connect the dots and recharge your pacemaker for next week against the Chargers.

“I think we like it dramatic,” said stage manager Hue Jackson, who is suddenly churning out wins like he’s Mike Pettine or somebody.

The Browns would have won it in regulation, except that Joseph, ripping a page out of the Zane Gonzalez Book of Shanks, followed the game’s only touchdown, a Mayfield-to-Rashard Higgins hookup in the second quarter, with a doink off the right upright (or was it the left down-wrong?).

“I told him, ‘We are going to need you later on. You are going to make a kick that is going to win it for us,” said Nostradamus Jackson.

Later became much later, because the Browns defense laid the wood to the Ravens offense for much of the game, sparked by Denzel Ward, who intercepted a pass on the Browns 3-yard line, then blocked a field goal attempt on the last play of the first half.

“No touchdowns and huge stops,” said Jackson of his defense.

But it’s the offense, with the resourceful and relentless Mayfield at the controls, that has flushed a wave of fresh air over the Dawg Pound. Sunday, Mayfield out-Flaccoed Joe Flacco, the Ravens’ veteran quarterback, who in his previous game hung 26 points on the Steelers in a dominating 26-14 victory at Heinz Field.

Sunday, Mayfield completed 25 of 43 passes for 342 yards and a touchdown. He did throw one bad interception, but his mobility, instincts, competitiveness and leadership are becoming weekly headaches for opposing defenses.

As time was running out in the overtime period, with a second-and-21 situation at the Browns 5-yard line, Mayfield scrambled for 13 yards, then converted on third-and-8 by hitting Derrick Willies with a short pass that Willies mazed his way for a 39-yard gain that was the big play leading to Joseph’s game-winning scud.

“That was a great defense we played today. We did some good things, but it comes down to us doing our jobs,” said Mayfield, who has only started two games in his NFL career and is already the face of the franchise. “It’s great to be playing in overtime, to test yourself. It’s frustrating that we didn’t score as much as we wanted to, but I’m happy for the fans. They deserve to see some wins.”

The wins that have come, and the wins that are coming, will likely be the result of an influx of young players that the organization has, after years of trying, finally added to the roster.

Mayfield, Ward and Myles Garrett are all impact players whose fingerprints seem to be all over every Browns game. There are others as well, but this is football, and you don’t win until you have a winning quarterback.

The Browns, finally, have one.

“I gave him the game ball again today,” Jackson said. “He hung in there when things were not always perfect. He made plays, really good plays, down the field. He has a way about him.”

He also has a desperate team and city in the palm of his hand. There will still be some speed bumps along the way, but you can’t teach charisma and leadership.

The Browns appear to be legit, and their search for a quarterback is officially over.

Browns-Ravens Preview: 5 things to watch; 3 key numbers; the prediction
Browns 12, Ravens 9 (OT): The breakdown — thumbs up, thumbs down, the matchups