Browns 12, Ravens 9 (OT): The breakdown — thumbs up, thumbs down, the matchups 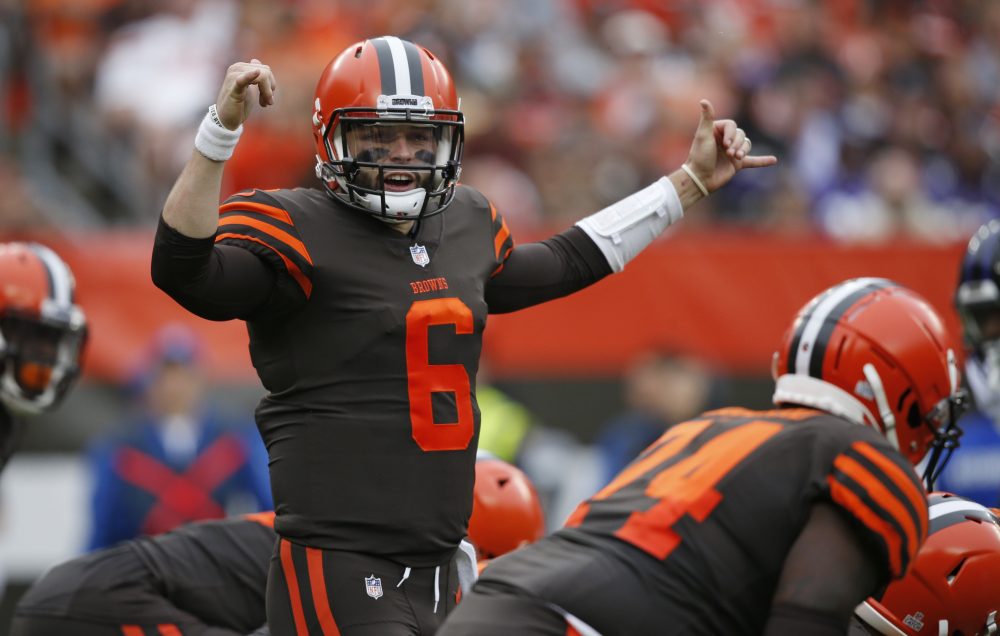 In two appearances at FirstEnergy Stadium he has come off the bench to lead a comeback over the Jets and beat the Ravens in overtime for the first home win over the rival since 2006.

No wonder Cleveland fans have fallen for him head over heels.

“Calm, collected and unfazed,” receiver Jarvis Landry said. “He stepped up big and obviously made plays with his arm, feet, getting out of some sacks and extending drives. For a rookie, he’s doing it.”

Ravens safety Eric Weddle congratulated him on the field after the game, then took some shots at him in the postgame interview.

“I’m happy about where Baker’s career has started and I’m excited to see where it ends up,” Weddle said. “I just had words of encouragement, nothing more than that. I respect this game. I give it my all, and I respect good players.

“He made some good throws, and he could have easily thrown three or four interceptions today. He moves the ball well. He’s hard to see back there because he’s short, so on some of the throws I couldn’t even see him. Sometimes my breaks were a little late.”

He broke free in the middle of the end zone and quarterback Joe Flacco put the ball on his hands. Crabtree couldn’t hang on. Instead of a go-ahead 14-yard touchdown with 56 seconds left, the Ravens settled for a 32-yard field goal that tied the game at 9. They lost in overtime.

“I put that on me,” Crabtree said. “Need to get into the lab and get back to the basics.”

He tied for the team lead with six catches for a team-high 66 yards but couldn’t get over the one that got away.

“I’m a team player. Letting them down, it hurt me,” he said, blaming a lack of concentration. “It’s football. You have to see the ball to catch the ball. I need to see it all the way in. If that means that I have to catch 2,000 footballs a week in practice, then I am going to have to do that.”

The Ravens had scored at least 20 points in 13 straight games.

It was now or never, and the Browns chose now.

Facing third-and-8 from Cleveland’s 18-yard line with 2:00 left in overtime, Mayfield felt the pressure from his left side, drifted back and right and zipped a ball to receiver Derrick Willies cutting over the middle with cornerback Brandon Carr in coverage. Willies made the grab and turned upfield for a 39-yard gainer that sent a jolt through the crowd. Four plays later, Greg Joseph kicked the winning field goal.

“His scramble is something else,” Willies said. “If you can get open when he starts scrambling, you’re going to get the ball.”

The preceding play was a 13-yard Mayfield scramble on second-and-21 from the 5 after a disastrous reverse on first down.

“Once you get stuck down in there, the mentality is to get the ball out but do so with the first down in mind,” Mayfield said. “Scramble drill happened. Willies got open and made a big play.”

Sunday games without a win for the Browns before the overtime victory. The last victory to start a week came Dec. 13, 2015, against the San Francisco 49ers with Johnny Manziel at quarterback.

Consecutive home wins for the Browns, the first such winning streak since 2014

“We were thinking, don’t give up a f—— sack for a safety right there. Let’s get the ball out. I think he did a good job getting a chunk back. Then it was third-and-8 or something and we got a big play to (Derrick) Willies, which was nice. At that point we were like, let’s not get a sack, let’s get out of this and let’s make something happen.” — Left guard Joel Bitonio, on his mindset after receiver Rod Streater lost 11 yards to the 5-yard line on a reverse to start the winning drive.

Neither team did much, but the Browns scored the only touchdown and managed the winning drive in overtime. Baker Mayfield continues to impress, and Carlos Hyde runs really hard.

Joe Flacco found a little rhythm in the no-huddle offense but was frustrated by a lack of deep opportunities.

The Browns got two more takeaways, to give them 15 in five games, and got stop after stop in the fourth quarter and overtime.

The Ravens harassed Mayfield all day — Terrell Suggs kept walking rookie left tackle Desmond Harrison back toward Mayfield — and got an early interception. The failure to close out overtime was the difference.

The Browns would’ve lost if the special teams play was as bad as it was in the first four games. But Denzel Ward blocked a field goal, Greg Joseph made the winning kick and the coverage units held their own. That qualifies as a huge success.

Hue Jackson got his first win in the AFC North in his 14th try. He talked all week about finishing, and the players listened and delivered. The coaches deserve credit for the upgrade in special teams play and a defensive game plan that kept the Ravens out of the end zone.