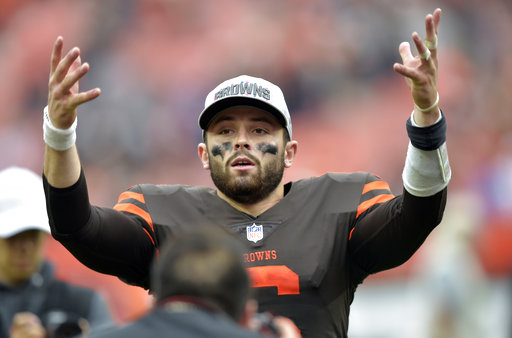 CLEVELAND — The Browns had gone six possessions without a point. They faced second-and-21 from their 5-yard line after an ill-advised reverse call to reserve receiver Rod Streater to start their final drive of overtime. They were staring at another tie with an archrival.

Baker Mayfield had other ideas in his first home start.

He escaped a pass rush that sacked him five times and pressured him relentlessly, scrambling for 13 yards. On third-and-8, he slid back and right and hit reserve receiver Derrick Willies over the middle for a 39-yard catch-and-run. After three Duke Johnson runs for 24 yards, Mayfield couldn’t decide whether to watch as rookie Greg Joseph lined up for a 37-yard field goal with six seconds left in overtime.

“I turned around last second and saw it pretty low. It wasn’t a pretty kick, but it went in,” said Mayfield, who looked stunned when he saw the result. “This also wasn’t a pretty win, but it counts.”

The Browns pulled a Mayfield, escaping with a 12-9 overtime victory over the Baltimore Ravens on Sunday at FirstEnergy Stadium. Joseph’s kick was partially blocked by Tony Jefferson, but the ball had enough on it to knuckle over the crossbar and set off a celebration a long time in the making.

The Browns got their first win inside the AFC North in 19 tries, dating to a 33-30 overtime win in Baltimore in 2015. They improved to 2-2-1 and are in the mix in the division. They stopped a five-game losing streak to the Ravens (3-2).

“The AFC North is a great division. We are bringing the competition back within the division, and that is great to see,” Mayfield said.

“We ain’t no joke. We’re for real around here,” running back Carlos Hyde said. “We put in hard work, we come to play every Sunday. Take us light if you want to.”

The Browns have gone to overtime three times in five games. They are 1-1-1 in extra time.

“We like it dramatic,” said coach Hue Jackson, whose first division win improved him to 3-33-1 with the Browns. “This football team will fight. They are becoming something. I can see it in their eyes. They believed, and they wanted to get it done.

“Do not be denied. That is all that we kept talking about on the sidelines is let’s finish this. We were able to do it.”

Mayfield went 25-for-43 for 342 yards, a touchdown, an interception and an 81.7 rating. He was most proud of the resilience shown throughout the game, particularly on the winning drive.

“Take a lot of pride in that. That shows that we are starting to change the culture around here,” he said. “We have a team right now that is starting to believe in themselves and rightfully so.”

The game was a grind.

The Browns scored one touchdown, on a 19-yard post route late in the second quarter to receiver Rashard Higgins, who left early in the fourth quarter with a knee injury that will require an MRI on Monday and was replaced by Willies. The offense was stuck with awful field position, starting only one of 15 drives better than their 25-yard line.

Joseph, who was picked up in Week 3, clanged the extra point off the right upright and missed a 55-yard field goal by a mile left with five seconds remaining in regulation. Jackson didn’t let him try a 57-yarder earlier in overtime, then applauded when the winner squeaked over the crossbar.

“You hear the thud on it real quick and just saw it luckily still carry through,” Joseph said. “Three points is three points.”

The defense provided the opportunity for a win by bouncing back from allowing 565 yards in a 45-42 overtime loss in Oakland a week earlier and holding the Ravens’ fifth-ranked scoring offense (30.8 points a game) out of the end zone.

The Browns added two more takeaways to give them 15, two more than all of last season when they went 0-16. Linebacker Joe Schobert forced a fumble recovered by tackle Trevon Coley, and rookie cornerback Denzel Ward intercepted a Joe Flacco pass at the Cleveland 3-yard line after it was tipped by end Emmanuel Ogbah.

Ward saved at least six points on the afternoon, as he flew around the edge at the end of the first half to block Justin Tucker’s 48-yard field goal try.

“He was everywhere,” defensive end Myles Garrett said of Ward, the No. 4 pick. “We have seen this in practice, and we have seen his potential. Now he is living up to his abilities.”

The Ravens make a habit of devouring rookie quarterbacks. They entered 15-5 against them under coach John Harbaugh with 27 interceptions and a 59.5 opponent passer rating, and were ranked second in the league defensively entering the matchup. They haven’t allowed a second-half touchdown this season.

Mayfield didn’t flinch. He never does.

He completed passes to nine receivers, scrambled twice for 23 yards, kept numerous other plays alive with his strength and agility and never let his teammates quit believing. In two games playing on the lakefront, he’s led a comeback against the Jets that included a winning drive in the fourth quarter and the overtime improbability Sunday.

“Baker is a different breed,” said Hyde, who rushed 17 times for 63 yards. “He is not like most other quarterbacks, and he is a big-time competitor. He is just non-stop and always comes back out slinging the ball. Even when he makes mistakes, he still comes out and plays the same way. He has a lot of confidence.”

The Browns are 2-0-1 at home, their best start since 3-0 in 2004. The fans screamed well after the final field goal and have reason to be optimistic about the future for the first time in a long time.

“Unbelievable environment,” Mayfield said. “Our fans are some of the best in the country. I believe that. They have been hungry for a while. They deserve to see wins.

“The biggest part about it is the way our defense is playing. There is zero question that we have a top-five defense in the league.”

And a team not afraid to put in long hours.

“It is tiring, but it’s worth it,” Garrett said of the third overtime game in five weeks. “There is no feeling better than coming down to the wire, against a team like the Ravens and being able to get a win.”