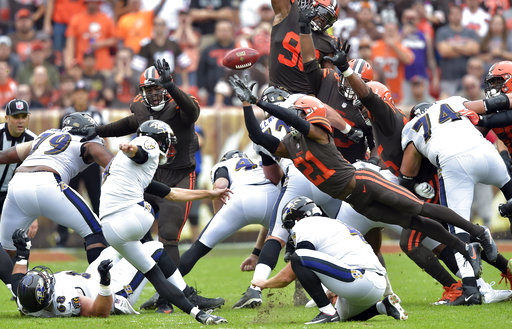 CLEVELAND — Without Denzel Ward, rookie quarterback Baker Mayfield doesn’t get the chance to work his magic in overtime.

Without Ward, rookie receiver Derrick Willies doesn’t get to be a hero off the bench with a 39-yard catch-and-run on the final drive.

Without Ward, rookie kicker Greg Joseph doesn’t get a shot at redemption or a game ball for his winning 37-yard field goal.

Without Ward, the Browns don’t beat the Baltimore Ravens 12-9 in overtime Sunday at FirstEnergy Stadium.


Ward, the rookie cornerback taken with the No. 4 pick, made two of the biggest plays of the game, taking points off the scoreboard for the Ravens.

He intercepted Joe Flacco’s tipped pass at the 3-yard line in the second quarter, keeping a 3-0 deficit from growing to six or 10 points. Then to end the half, he blocked Justin Tucker’s 48-yard field goal to preserve a 6-3 lead.

In a game that went to overtime, Ward made all the difference.

“I will tell you what, it is a lot better when he is on my team than when I played against him,” Mayfield said, referring to the Oklahoma-Ohio State matchups of the previous two years. “He is a guy who continues to get better and make plays for us, huge plays. A turnover down in the red zone is big and then a blocked kick.

“When it comes down to it, we would not have gone into overtime if he did not block that kick. So happy for him and just happy I am on his side.”

Ward got two interceptions in the opening tie against the Steelers and has been spectacular through the 2-2-1 start. He had five tackles and two passes defensed to go with the interception Sunday, and for the year has 25 tackles, three interceptions, three passes defensed, a forced fumble and a fumble recovery.

“Just coaches putting me in great positions to make plays,” he said of the interceptions.

The latest interception came after Flacco rolled right and end Emmanuel Ogbah tipped the pass. Flacco said he was trying to throw it away.

“Honestly, I don’t even remember what I seen,” said Ward, who was covering tight end Nick Boyle. “The ball, God put it in my hands. I don’t know how I caught it, I didn’t even see it.”

Coach Hue Jackson said Ward demonstrated the ability to speed around the edge and block kicks at Ohio State, so he challenged him last week to do it at this level. Ward burst around the corner before Boyle could stick a hand out to slow him down.

“I just tried to come off as fast as I could and got a hand on it,” Ward said.

“He timed up the snap and I thought he got a great jump and got it,” Ravens coach John Harbaugh said. “It was a great play by their guy.”

Ward went to Nordonia High School, so he knows the pain the Browns have inflicted on their fans in recent memory. He knew beating the rival Ravens mattered.

“It’s a lot of fun. Just doing what I love to do, what I’ve dreamed of since I was a kid, especially for my hometown, so it’s exciting and trying to keep getting wins.”

The defense didn’t allow a touchdown, matching the higher-profile Ravens unit for 69 minutes and 58 seconds. Flacco went 29-for-56 for 298 yards, the interception and a 60.0 rating, as the Browns limited his deep throws and forced him to look underneath and string plays together to get a score.

“Boy, they just bowed up and made some plays and called on each other,” Jackson said. “It was good to see so many guys contributing out there on defense. Those guys are flying around and playing well. Sometimes we give up some plays before we will bow up and stop you when the time comes.”

The early play of Ward and Mayfield, the No. 1 pick, has Browns fans imagining the possibilities for this year and the next decade.

“They brought us in here to make plays and I feel that’s what we’ve been doing so far,” Ward said. “I feel we’re a great team, we’ve just got to show that night in and night out.”