2-2-1 start, Baker Mayfield’s emergence have Browns believing they can play with anybody 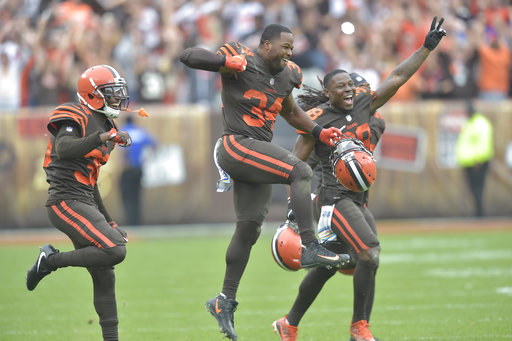 Not only has the win total doubled from coach Hue Jackson’s first two seasons combined following Sunday’s 12-9 overtime victory over the Ravens, the near-miss losses and tie have the Browns’ confidence skyrocketing.

The Browns led in the fourth-quarter of both losses and had a field goal blocked in overtime in the tie with the Steelers. Their wins are by four and three points, and the losses by three and three.

No wonder some of the players have talked about how they should be 5-0.

“We thought about it. We could be, but we are not. We are 2-2-1,” said Jackson, who’s 3-33-1 with the Browns. “I think our team has shown that they can compete and play against anybody when we do things right and we do the things that we are coached to do. I feel comfortable with our team playing anybody.

“At the same time, we know there is still work to be done. We know that we have a lot of things to continue to clean up. Hopefully, as we keep going, we will be a team that can play anybody any place any time.”

Such a statement would have been ludicrous as Jackson’s first two Browns teams went 1-15 and 0-16. But new general manager John Dorsey remade the roster in the offseason, and rookie No. 1 pick Baker Mayfield has inspired confidence throughout the team with his command, charisma and clutch play.

“I think that it just shows the improvement of our team,” Jackson said. “I give that credit to the personnel department and our coaches. We have done a really good job of putting more talent on the team, but the talent has to be coached and the talent has to play well. I think we are heading and trending in that direction.”

Mayfield has completed 58.9 percent for 838 yards, three touchdowns, three interceptions and an 81.4 rating. He led a comeback victory over the Jets off the bench in his debut, then overcame a second-and-21 from the 5-yard line for the winning drive Sunday in his first home start.

Jackson said the rookie’s a big part of the team’s resilient spirit.

“That has just been everybody’s mindset that we are willing to do whatever it takes to get this organization where it needs to be and to win football games,” Jackson said. “To a man, nobody ever worries about the situation we are in. We are just going to play it through.

“They have been really gritty, really resilient and really hard-working. When you do those things it is hard to ever give up in a game because you always feel like you have a chance to win. That is where Baker has stepped in because there is a belief in what he does. There is a belief in how he goes about his work and his business as the quarterback of this football team. It is all working together.”

Home success has driven the surprising start. The Browns are 2-0-1 at FirstEnergy Stadium, their best start since 3-0 in 2004.

“We have to protect our house at any cost,” Hyde said. “We are doing a good job so far, and we just got to keep building on it.

“The fans have been a big help. They have been really loud when the other team has the ball. When it is crucial time, they get really loud.”

Linebacker Joe Schobert has seen opponents captivate their fans on the road and has yearned to do the same on the lakefront.