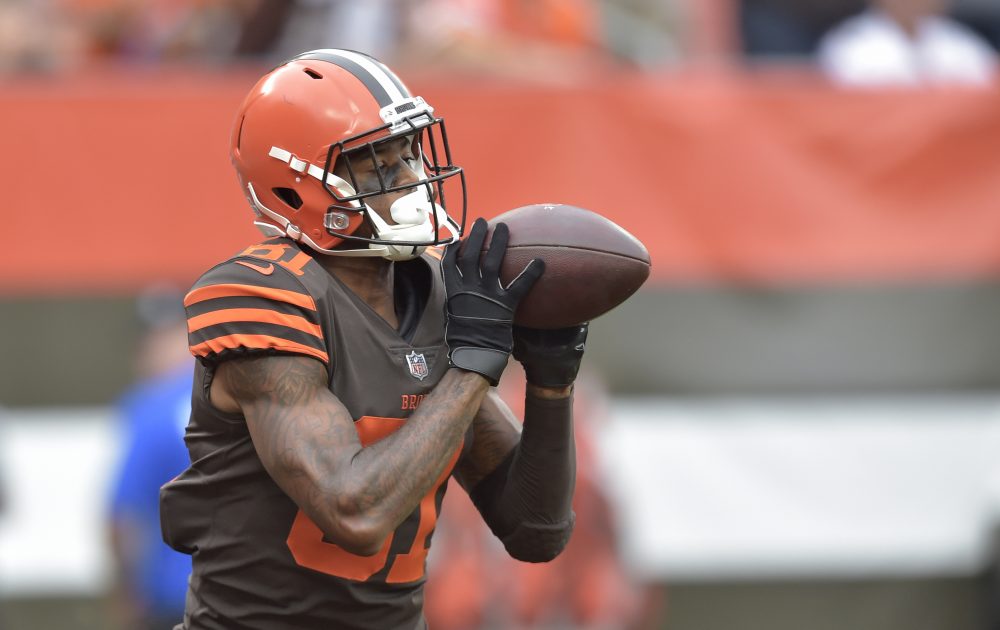 The Browns will be without No. 3 receiver Rashard Higgins for at least a couple of weeks and are considering whether to add a veteran replacement or move forward with the wideouts already on the roster.

Higgins suffered a sprained medial collateral ligament, an MRI revealed Monday. Coach Hue Jackson said surgery won’t be needed and labeled Higgins’ playing status as “week to week.” The next three games are against the Chargers, Buccaneers and Steelers.

Higgins was injured Sunday early in the fourth quarter of the Browns’ 12-9 overtime win at FirstEnergy Stadium. He was slow to get up after blocking during a catch-and-run by tight end David Njoku and left the game.

The Browns had a possible replacement in their facility Monday, as veteran free agent Rishard Matthews worked out for the team.

“We’ll see,” he said on a conference call. “We have some good candidates here, and I like our guys that are here.”

Undrafted rookie Derrick Willies replaced Higgins on Sunday and caught three passes for 61 yards, the first of his career. His 39-yard catch-and-run on third-and-8 with 2:00 left in overtime kept alive the winning drive. Veteran Rod Streater and sixth-round rookie Damion Ratley are also on the bench behind starters Jarvis Landry and rookie Antonio Callaway.

“I feel like these guys know our system, know exactly what we’re looking for and know how to come in and practice the way we do and understand what the opportunity would be for them, not that I wouldn’t like somebody else who could really play,” Jackson said. “But it’s just hard to find those kind of guys at this time, guys that can come in and really contribute right away just ’cause they haven’t practiced with you, don’t know the system. Guys that you have to get caught up to speed, sometimes it just doesn’t work out as well.”

Higgins had three catches for 66 yards, including the game’s only touchdown, a 19-yard post late in the second quarter. He has 16 catches for 244 yards and a touchdown on the year.

“Obviously he was doing some really good things and we’ll miss him until we get him back, because he’s been very consistent for our football team,” Jackson said.

The Browns hosted former Cowboys star Dez Bryant for a visit during training camp but nothing appears to be brewing on that front.

“I haven’t spoken to John about that,” Jackson said. “We haven’t had a conversation about that at all.”

ALONE AT THE TOP

Landry caught five passes for 69 yards Sunday, giving him 429 catches, the most in the NFL for a player in his first five seasons. He passed Arizona’s Larry Fitzgerald, who had 426 from 2004-08.

Landry broke the record in four years and five games, and his No. 80 jersey from Sunday was headed to the Pro Football Hall of Fame.

.@God_Son80‘s jersey from last night is off to the @ProFootballHOF after setting the record for most receptions in a player’s first five seasons ? pic.twitter.com/BFpBiM0Vcq

He leads the team with 29 catches and 381 receiving yards, and played all 80 offensive snaps against Baltimore.

“What he says, he means. He walks the talk,” Jackson said. “The guy loves football. He is always out there. He is very competitive.

“In games, he shows up and makes plays. At times when we need big-time plays, he makes plays. That, to me, is invaluable in this league.”

Social media wasn’t kind to Jackson — there’s a surprise — as he initially celebrated like the game was over, then raised two fingers for the two seconds left on the clock after Greg Joseph’s winning 37-yard field goal in overtime. The TV cameras also caught an official signaling two seconds and trying to usher players back to the sideline as if the game wasn’t finished.

It was, because overtime becomes sudden death once each team has a possession.

“One of the officials was saying, ‘Hold on, wait a minute. Hold on.’ I think he had to go back and make sure that it was overtime in his own mind,” Jackson said. “The first thing he said was there was two seconds left.

“That is why I put up two fingers because I was trying to really understand what he was saying, and basically, that was just me referring back to him that the two seconds did not matter. The game was over. It was overtime.”

Punter Britton Colquitt had a big game, averaging 50.2 yards with a 41.4 net and three inside the 20-yard line. The performance was part of an overall improvement on special teams.

“We still have a ways to go,” Jackson said. “Britton Colquitt did a really nice job punting and pinning the Ravens back.”

** Joseph made a 35-yard field goal, missed an extra point off the right upright and badly missed a 55-yarder at the end of regulation before making the winner. In three games with the Browns, the rookie has gone 6-for-7 on field goals and 3-for-4 on extra points, and his job status is shaky.

“We will always find ways to improve the football team as we move forward,” Jackson said. “Right now, he is our kicker until he is not.”

“We have to get more consistent at getting that number down and getting it down fast,” Jackson said.