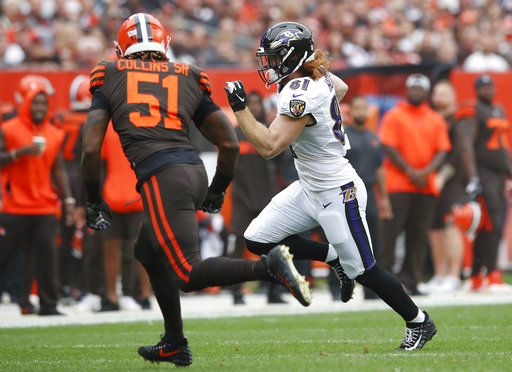 Outside linebacker Jamie Collins and strong safety Jabrill Peppers can be the difference between good and great for the Browns defense.

Too many games end without a noticeable impact from Collins or Peppers, but that changed Sunday in the 12-9 overtime win over the Ravens. Collins had 12 tackles and a sack and Peppers four tackles and two passes defensed, and the defense didn’t allow a touchdown.

With end Myles Garrett, tackle Larry Ogunjobi, middle linebacker Joe Schobert, rookie cornerback Denzel Ward and free safety Damarious Randall playing at a Pro Bowl level, Collins and Peppers can push the defense to dominant by living up to their potential. They have great athleticism, and need the impact plays to match.

“Both of them had terrific games,” coach Hue Jackson said Monday. “They were one of the huge reasons why our defense could keep that team out of the end zone.


“That is what we expect from them, and it is good to see it. Now we know they can do it. They need to do it consistently.”

Collins is as talented as anyone on the defense not named Garrett or Ward. As tantalizing as that is, it can also be frustrating to fans, coaches and the front office, as Collins has routinely failed to make the most of his physical gifts and live up to his four-year, $50 million contract.

He’s incredibly strong at 6-foot-3, 250 pounds, is athletic enough to run with tight ends and the coaches rave about his football intelligence and instincts. Yet he too often gets caught out of position, either by freelancing or going for the splash play.

Collins, who played 69 of 87 snaps vs. the Ravens, has 32 tackles this year with two sacks, a tackle for loss and two passes defensed. In 69 career games, he has 15.5 sacks, 12 forced fumbles, six interceptions and a Pro Bowl appearance after 2015 — solid, but not good enough for the Patriots to commit to him.

The hope is the Browns’ success excites and motivates Collins. He won a Super Bowl with the Patriots, and his experience can be valuable to a unit loaded with youngsters who had done nothing but lose with the Browns.

The next step is for Collins to join the takeaway troupe. The Browns have forced a league-high 15 turnovers, but Collins is still looking for his first.

“He has been extremely close on four or five opportunities,” Schobert said. “He is always kicking himself when he does not get there because he is the one that preaches it the most on defense. He is the one that kind of sets the tone in practice. I am excited to see where it goes.”

Peppers doesn’t have the experience of Collins, but the expectations are high for the playmaker and Heisman Trophy finalist taken with the No. 25 pick of the 2017 draft. He’s back at his natural strong safety spot and finally played with freedom against the Ravens.

Peppers put himself in the spotlight last week with his comments to me that Browns fans are “wishy-washy” and he gets harassed when he goes out in public. Instead of melting in the heat, he seemed buoyed by the pressure.

He hit hard and ran hard during his 48 snaps, making plays over the middle and on the sideline.

“I thought it was the best game that Jabrill has played — breaking up passes, making tackles, being around the ball,” Jackson said.

Now Peppers needs to change the game as a kick returner. His film from high school and Michigan shows what a threat he can be with the ball in his hands, but he still doesn’t look comfortable returning kicks at this level.

He had a 12-yard punt return against the Ravens, so perhaps that was a sign of things to come. Maybe the breakthrough on defense is transferable.

A few other thoughts …

** The personnel department fell in love with the young receivers during training camp and the preseason and seem content to rely on them following the trade of Josh Gordon and the knee sprain that will sideline Rashard Higgins for at least a couple of weeks.

Antonio Callaway, Damion Ratley and Derrick Willies certainly have potential, but the lack of proven wideouts will increase the defensive attention on Jarvis Landry and the pressure on quarterback Baker Mayfield.

** Rookie running back Nick Chubb returned to earth against the Ravens. That shouldn’t be a surprise.

Chubb has struggled when the running lane isn’t immediately clear, and once he starts going sideways, he’s in trouble. He should continue to get a limited turn in the backfield and will improve with repetitions. He will also benefit from watching starter Carlos Hyde, who has the right mixture of patience and aggression.

Ravens pass rusher Terrell Suggs, who’s headed to the Hall of Fame, was able to overpower Harrison on too many occasions. He would get into Harrison’s chest and walk him back toward Mayfield.

Jackson admitted this but liked how Harrison fought.

“He gave up a sack one time, but I thought he hung in there extremely well and did a good job,” he said.

Browns 12, Ravens 9 (OT): The breakdown — thumbs up, thumbs down, the matchups
Browns-Chargers Preview: 5 things to watch; 3 key numbers; the prediction