Hue Jackson relying on rookie receivers to help Jarvis Landry — “It is concerning, but you trust them” 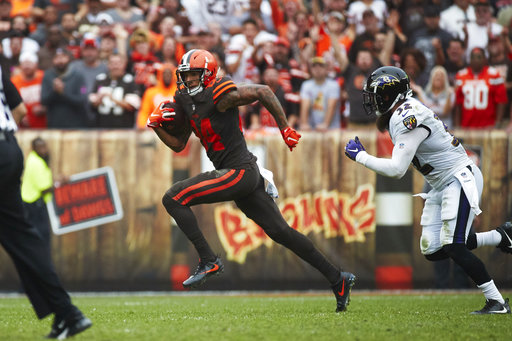 BEREA — Antonio Callaway was suspended by the University of Florida and didn’t play last year. Derrick Willies was kicked off the Texas Tech team after appearing in seven games. Rod Streater was out of football.

Damion Ratley doesn’t have a catch in the NFL.

With Josh Gordon long gone to New England and Rashard Higgins out at least this week with a sprained knee ligament, the Browns are taking a leap of faith with their receivers not named Jarvis Landry.

“Yeah, it is concerning, but you practice, you trust them, you work with them and you feel good about how they are coming along,” coach Hue Jackson said Thursday. “You have to roll the dice. We feel good about the guys we have. They have to go out and make plays. We have to put them in position to make plays and kind of go from there.”

The Browns (2-2-1) hosted veteran Dez Bryant on a visit during the preseason but didn’t sign him. They worked out veteran Rishard Matthews on Monday but again chose to go with the guys already in the building. Callaway, Willies and Ratley have been together since rookie minicamp in early May.

“The further you go, the more I think you like to see your own, the guys you put a lot of time and effort in, step in and do the job,” coordinator Todd Haley said.

“It feels good to know that they just know we’ve got room to grow, we’re growing every day,” Callaway said. “We’re young, so I’m glad they just believe in us.”

Streater entered the league in 2012, has 127 career receptions, didn’t make a roster last year and has no catches since signing Sept. 17 after Gordon was shipped out in a trade. The other three who will be active Sunday against the Chargers (3-2) are rookies.

Callaway took Gordon’s spot in the starting lineup and has 13 catches for 177 yards and a touchdown. Jackson scaled back his snaps last week, thinks it helped him have more burst at the finish and sees progress.

“He is making it by little doses,” Jackson said. “That is what you want to see. You want to see improvement.”

Willies caught his first three NFL passes for 61 yards after Higgins was injured against the Ravens, including a pivotal 39-yarder on the winning drive in overtime. He thought his NFL dream was over when he was kicked off the Texas Tech team but signed with the Browns after the draft and quickly got the attention of the front office and coaching staff.

Ratley, who caught only 47 passes in three years at Texas A&M, has been a healthy scratch three times but is bumped up to No. 4 on the depth chart this week. Haley was asked if the reliance on rookies is unsettling.

“It could be, but it is not,” he said. “It could have been unsettling in the game last week. That is why I was so proud of Willies and made sure I pointed that out to the entire group that this is how it works. You develop your own. Next man up. If somebody goes down, somebody ideally that you have been training, working and coaching steps in and gets the job done. I am excited to see these guys go out and get better.”

Without Higgins (16 catches, 244 yards, touchdown), even more of the burden will fall on Landry, who has established himself as the clear No. 1 wideout. Quarterback Baker Mayfield has already seen defenses try to take away Landry with extra attention.

“I would hope they would try to do that to one of the best receivers in the NFL,” Mayfield said. “At the same time, that is what opens up some stuff. Like when Hollywood (Higgins) scored, the safety came down on Jarvis’ end. When you see that, you just have to take advantage of the matchup.

“That is why we preach that you have to win on your one-on-ones, and you have to have the next-man-up mentality. Does not matter who it is, you have to do your job.”

“But until our other guys start really showing what they are, you are going to pay even more attention to him,” he said. “We need some guys to continue to step up. I think that would take a little pressure off Jarvis, but I think Jarvis likes it that way. He likes it when all of the attention is upon him because he wants to be able to make those plays.”

Landry leads the team with 29 catches for 381 yards and is the pied piper in the impressionable receiver room.

“We’re basically just following his lead,” Callaway said. “Just follow behind. He ain’t gonna lead us in the wrong way, he works hard every day, as you all see. He puts in the work, so all you got to do is follow behind him and then everything else will come easy.”

Despite counting heavily on the rookies, Jackson said Haley’s hands won’t be tied with the game plan and play calls.

“If we had to do that, then we would be searching for people to put on our team,” he said.

“Regardless of the year you are or when you came in, we expect you to make plays,” running back Duke Johnson said. “And if you’re in here, you’re going to make plays and we believe in you.”