Browns defense gets “punched in mouth” early, knocked out late in 38-14 loss to Chargers 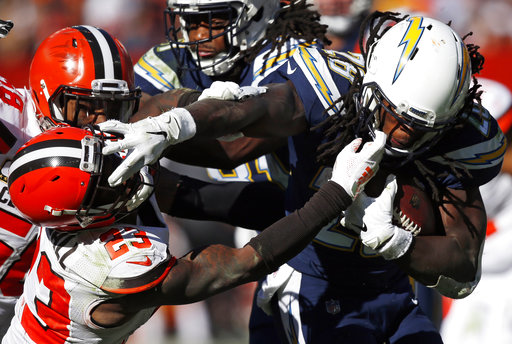 CLEVELAND — “Start fast” was written in two spots on the locker room white board that lists the pregame schedule.

The Browns defense still didn’t get the message.

The Chargers got the ball for the first time on their 43-yard line after a 32-yard punt return, and quarterback Philip Rivers needed only five plays for a lead the Chargers never relinquished in a 38-14 win Sunday at FirstEnergy Stadium.

“Obviously they punched us in the mouth early, up on the opening drive and they were just doing some things that obviously we couldn’t stop,” free safety Damarious Randall said. “We’ve just got to go back to the drawing board.”

Melvin Gordon ran for 4 yards, then 16. Receiver Keenan Allen took a jet sweep 16 yards, then caught a pass for 17. Gordon finished the procession with a 4-yard touchdown run on a pitch to the right.

There was more of that to come.

The Chargers (4-2) had 12 plays of at least 15 yards, including six of at least 20. They were equally explosive running and passing.

Gordon rushed for 132 yards, a 7.3 average and three touchdowns, and the Chargers totaled 246 yards on the ground with a 6.8 average. Gordon had a 15-yard run in the fourth quarter in which Randall and end Emmanuel Ogbah were called for separate face mask penalties.

The Browns (2-3-1) relied on takeaways in the first five games, entering Sunday with a league-leading 15 after only 13 all of last year. They didn’t get one against the Chargers until linebacker Christian Kirksey intercepted a tipped pass in the fourth quarter with the outcome decided.

Randall thought they were robbed of one in the second quarter on Williams’ 45-yard score.

Rivers threw into triple coverage, and Randall leaped to make the interception. As he fell to the ground, Williams latched on and the officials ruled a touchdown. Williams caught a 44-yarder on the previous play.

“I caught it clean and I was just falling back and he just happened to be the guy that was laying there and when the ref came over there we were both tussling because he was trying to grab it from me at that point, and the ref seen it as we’re both tussling and 50-50 goes to the receiver,” Randall said. “But I guess that’s the world we live in.”

That made it 14-3 with 6:34 left in the second quarter, so it was a key play. But the Browns never solved Los Angeles’ rushing attack, giving up big gains on runs up the middle and bigger chunks on jet sweeps around the corner. Coach Hue Jackson said they failed to set the edge, and defensive tackle Larry Ogunjobi said the Chargers used the Browns’ strengths against them.

“We’re guys who like to get up the field, knock back the line of scrimmage, but for teams that are more positional blocking, they don’t care about that,” he said. “They take your momentum and use it against you. That’s why you see a lot of guys on the ground. They just let you come up, get in front of you, try to cut you off, things of that nature. So we have to do a better job of recognizing those schemes and understanding that we’ve got to adapt to them, not just doing the same things and expect different results.

A lack of energy and missed tackles compounded the scheme issues.

“We just didn’t tackle well,” Kirksey said. “There were some things we did that were uncharacteristic.

“I think we were a little dry, a little flat coming into the game. We’ve just got to find a way to start fast and finish games.”

Ordinary Joe Schobert is no ordinary Joe: Making splash plays like a Pro Bowler, matching wits with future Hall of Famers and staying true to himself
As Hue Jackson hopes to add experience at receiver, Jarvis Landry says the plays are there to be made, rookies must step up