Commentary: Reality bites Browns and Baker Mayfield, as the inevitable happens and it becomes obvious they’re not a finished product 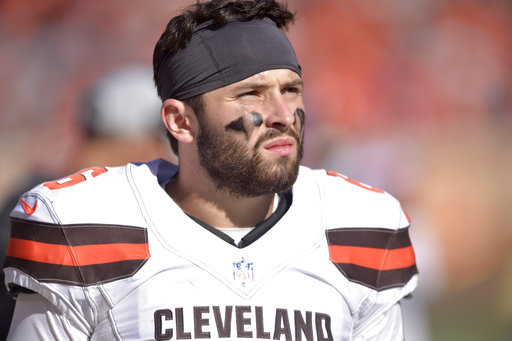 Reality can be such a party pooper.

Baker Mayfield is still a rookie, and sometimes he’s going to play like one. The Browns are still a team that went 0-16 last year, and sometimes they’ll play like it. There are some really good teams in the NFL, and every once in awhile, one of them is going to show up at FirstEnergy Stadium.

Hint: It wasn’t the Browns.


So, yes, the bandwagon is going back into the garage for a grease job, oil change and reality check.

Let’s put it this way: The Chargers had one touchdown drive that went 89 yards on two plays in 72 seconds.

The Chargers had another TD drive in which they went 10 yards on one play in five seconds.

They even had a scoring drive in which they ran five plays in 2 minutes, 37 seconds, for minus-1 yard — and they still scored. That’s right, the Browns gave up a score when the Chargers were actually going backward.

“We didn’t play well. I take total responsibility for that,” said a fast-talking and terse Hue Jackson, whose postgame rapid-fire media appearance consisted of about five minutes of vamping various forms from the same theme, which was — and I’m paraphrasing here — “We stunk. We need to get better. We will.”

Did I mention it wasn’t that close?

The less said about this game the better, so let’s say a little more:

It was inevitable. This frequently happens in sports, when a traditionally wretched team suddenly gives the appearance of not being wretched, only to play a game that reminds everyone to put away the party hats and horns. For now.

The Browns are not a finished product.

They were 0-16 last year. They didn’t lose three of their first five games this year. That’s progress, but that’s not a runaway train.

He’s a rookie. That’s what rookie quarterbacks — even the good ones — eventually do. Sunday was Mayfield’s worst game as a professional. He threw 46 passes and completed 24 of them — 22 to his team and two to the other team. He was sacked five times. He held the ball too long. He slipped on the sideline first-down marker and sprained an ankle.

He’s had better days — like all of them. Until Sunday.

“It wasn’t one of his better days,” Jackson said.

“I’ve got to be more accurate. That’s one of my strong suits, but it wasn’t today. I’ll get that fixed,” Mayfield said of his worst day as a pro.

Sunday was a hard day in the Hardland.

“That’s how it works,” Mayfield said. “You’re not always going to have a perfect day. When something goes wrong, you have to fix it on the fly and be a great in-game adjuster. I didn’t do that today.”

The Browns’ offense didn’t get much help from the Browns’ defense — and vice versa, for that matter. For most of the second half, both units looked bewitched, bothered and bewildered.

But it was the defense, that had drawn rave reviews for much of the last month, that gave up nearly half a thousand yards Sunday. Two of San Diego’s touchdowns came on spectacular receptions by Tyrell Williams, one of which he outwrestled three Browns defenders for the ball as the scrum fell into the end zone.

It looked like a basic case of want-to. Edge: Williams.

“They did not play very well,” Jackson said of his defense. “On the edges, they were able to exploit it. We had no force set. That team ran the ball for a lot of yards.”

The Chargers rushed for 246 yards, averaging 6.8 yards per carry.

From start to finish, in all phases, it was a huge wet blanket thrown on a Browns team that thought it had turned the corner — only to get flattened by its own runaway bandwagon.

Call it a timely reality check, for everyone. The Browns are better than they have been the last several years. But Sunday they were run out of their own backyard by a better team.

Browns-Chargers Preview: 5 things to watch; 3 key numbers; the prediction
Chargers 38, Browns 14: The breakdown — thumbs up, thumbs down, the matchups