Mailbag: Where was Nick Chubb last week? Why Seth DeValve? A timeline for Rashard Higgins? 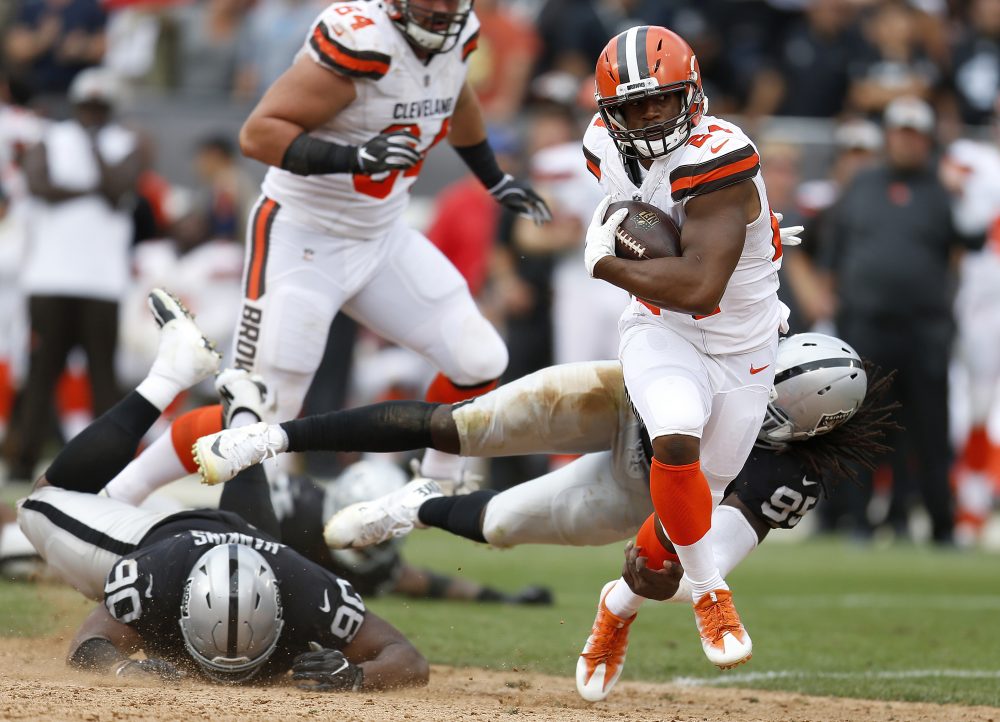 Q: Why was running back Nick Chubb benched last week?

A: Benched is an exaggeration, but I get your point. After three carries in three snaps for 105 yards and two touchdowns vs. the Raiders, Chubb got 11 snaps last week against the Ravens, carrying three times for 2 yards.

The reason for the lack of carries is obvious in the stats. He didn’t get off to a hot start and play caller Todd Haley stuck with Carlos Hyde for 17 carries for 63 yards. Haley is still figuring out the best way to use all three running backs.

Q: When will the Browns come to their senses and get rid of the ALWAYS injured, never playing Seth Devalve? Devon Cajuste caught better, his blocking was improving and was on the field where as DeValve wasn’t during the preseason and barely played/been available so far the regular season. He has been off the field more than on his whole stay in Cleveland.

A: First of all, I don’t think Cajuste is an NFL player. He struck me more as a “Hard Knocks” creation, and if he were that good, he would’ve been picked up by a team after he was cut.

As for DeValve, this is a big couple of weeks for him. With the injuries at receiver, the Browns could turn to him for more of a role in the passing game. He caught one pass last week for 26 yards in nine snaps. The injuries are a legitimate concern, but when DeValve is healthy, he’s an NFL player with big-time athleticism.

Q: What part of the week will the Browns be reassessing Rashard Higgins’ timelime for returning? He was hoping for only one week off, but nothing would be set until he’s cleared to practice.

A: Thursday is a pivotal day for injured guys. If he can practice by then, even if limited, he’ll have a chance to play next week at Tampa Bay. But it felt like Higgins was being overly optimistic. A sprained medial collateral ligament usually requires at least two weeks of recovery, so practicing or playing next week is a stretch.

Q: Will receiver Breshad Perriman be active today and see the field? With his speed, could The Bomb Pass be his play?

A: He will not be active. The turnaround from signing Saturday to playing Sunday was just too short.

Speed is Perriman’s best asset, so the deep ball is certainly up his alley. Given the late introduction to the playbook, he’ll have a limited set of routes early in his tenure, and expect the go to be among them.

Q: Why Breshad Perriman and not Dez Bryant? What do Browns need to do for a schedule flex to prime time??

A: Perriman is younger, played in the preseason and is ready physically. Bryant will need time to get his legs up to speed and brings way more baggage.

If the Browns keep winning, I have no doubt they’ll be flexed to prime time. Keep an eye on the two Bengals games if Cincinnati remains atop the AFC North.

Q: How long does a player have to be on the injured reserve?

A: A player put on IR must miss eight games. Cornerback Terrance Mitchell (broken wrist) and receiver Derrick Willies (broken collarbone) are candidates to return this season, depending on their recoveries.

Q: With the Browns now working on choosing their future uniforms for 2020, does that process incorporate the potential for a total brand update, or is it limited to just the uniforms? Could we see an even oranger orange or an updated logo in 2020 along with the new uniforms?

A: I’m not a uniform or logo expert, but I’m pretty sure they can adjust the logo whenever they choose, as opposed to the uniform restrictions.

But I think the organization learned it’s lesson last time and won’t overhype a minor change.

Mailbag: When will Browns use their salary cap space? Will they trade Tyrod Taylor? Who’s the emergency QB?
Mailbag: Would losing streak cost Hue Jackson his job? What will be the roles for Nick Chubb, Duke Johnson following Carlos Hyde trade?