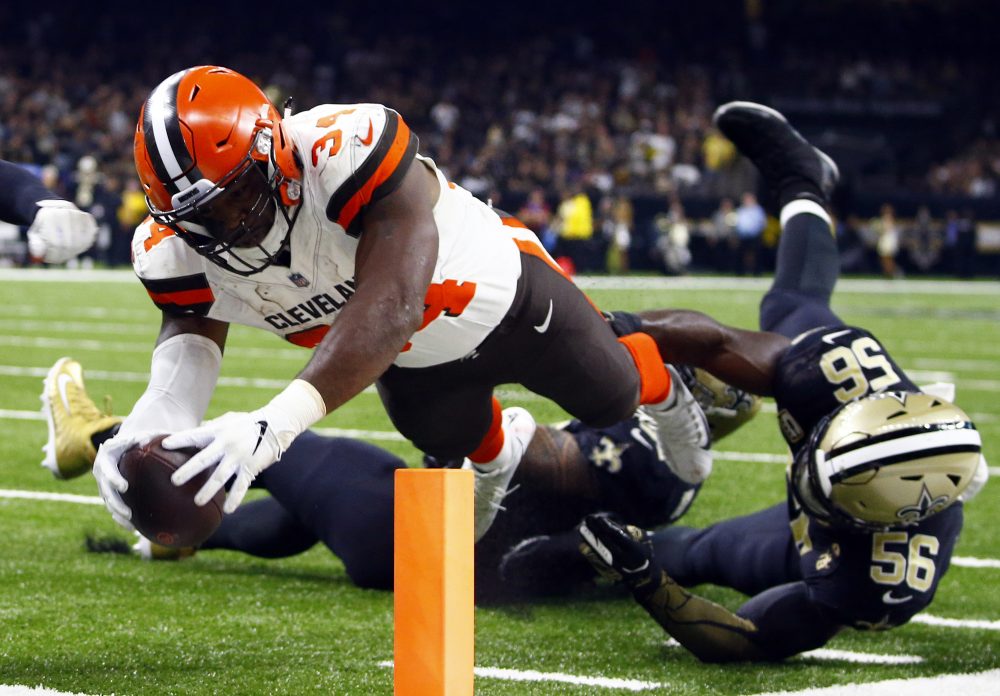 BEREA — Running back Carlos Hyde got 64 percent of the Browns’ carries through six games. He led the team and is tied for fourth in the league with five rushing touchdowns. He practiced all week.

He was traded Friday afternoon to the Jaguars in a surprise move. The Browns received a fifth-round pick in the 2019 draft, with the deal contingent on Hyde passing a physical.

Hyde, 28, had been effective, rushing 114 times for 382 yards, a 3.4 average and five touchdowns. But his workhorse mentality and coordinator Todd Haley’s insistence on giving him the majority of the carries limited the opportunities for rookie Nick Chubb and Duke Johnson.

The trade removes the logjam.

Coach Hue Jackson has said for weeks that Chubb needs to get more carries and Johnson needs to be more involved. Haley has no choice now.

He’s expected to assume the starting role, with Johnson spelling him and remaining as the third-down back. It’s the same role Johnson had last year, when he had 1,041 yards from scrimmage and was voted the team’s player of the year.

Johnson has 19 rushes for 111 yards and 14 catches for 164 without a touchdown. He signed a three-year, $15.6 million contract extension in the offseason.

Hyde signed a three-year, $15.25 million deal as a free agent in March, including $8 million guaranteed. The Ohio State product spent the first four years of his career with the 49ers.

The deal makes sense for the Jaguars, who entered the season with Super Bowl aspirations but are off to a 3-3 start and don’t know when power back Leonard Fournette will return from a lingering hamstring injury.

The Browns continue to stockpile draft picks. They have 10 in 2019, including an extra in the third (Danny Shelton trade) and two in the fifth (Hyde and Josh Gordon).

Center JC Tretter tested his high left ankle sprain in practice for the first time this week and seems set to start Sunday against Tampa Bay. He was listed as questionable on the official injury report.

“Very encouraging. I feel good that, just knowing JC, he is going to compete and go play,” Jackson said.

** The Browns will catch a break, as Tampa Bay will be without six-time Pro Bowl defensive tackle Gerald McCoy, who was ruled out with a calf injury.

“He is one of the best players on their team. It makes a huge difference,” Jackson said.

ON THE ROAD AGAIN?

Jackson’s still looking for his first road win in three years as coach and said he’ll bring it up with the players Saturday.

“The thing that I think is important is that we have had chances. Now we just have to get over that other hump of doing it and just making sure that we are finishing. It has been a long time since we have even been at the door on the road.”

The Browns have lost a franchise-worst 23 straight on the road, with their last win Oct. 11, 2015, in Baltimore under coach Mike Pettine. Detroit has the longest road skid in league history, ending a 26-game slide in Tampa in 2010.

The Browns haven’t thrown the whole playbook at receiver Breshard Perriman, who signed Oct. 13, but expect him to play a role against the Bucs.

“He has handled it pretty well,” Jackson said. “He seems like a real conscientious young man. It seems important to him. I feel comfortable that if we need to put him out there, he will go out and do the job that we are asking him to do.”

Perriman was the No. 26 pick of the Ravens in 2015. He was cut before this season after struggling with injuries and drops during his tenure.

“Since he has been here, he has caught the ball,” Jackson said. “He has to go do it in a game, but he looked pretty good out there catching passes this week.”

The forecast for Tampa on Sunday is 83 degrees and sunny, quite a departure from the 50s the Browns practiced in during the week. Jackson acknowledged the change could be a factor.

“We will take all the proper precautions to make sure that our guys are hydrated the right way so we can handle the heat,” he said. “We do not need anybody passing out obviously on the sideline or losing a player because of it.”

** Rookie outside linebacker Genard Avery is excited to step into a starting role with Christian Kirksey taking over at middle linebacker for Schobert.

“It is going to be a great opportunity for me to show myself,” said Avery, who has 1.5 sacks, two passes defensed, a forced fumble and 10 tackles. “I have prepared for this moment every day.”

“I’ve got to get in better shape,” said Ratley, who played 65 offensive snaps after one over the first five games. “They are fast.”

Notes: Jarvis Landry trying to ignore the ugly stats as frustration grows over lack of production
Notes: Rookie Nick Chubb was stunned by trade of Carlos Hyde but filled in nicely in 1st start