Hue Jackson has “no doubt” he still has support of ownership, says Todd Haley will remain play caller but he’ll “infuse” himself to help offense 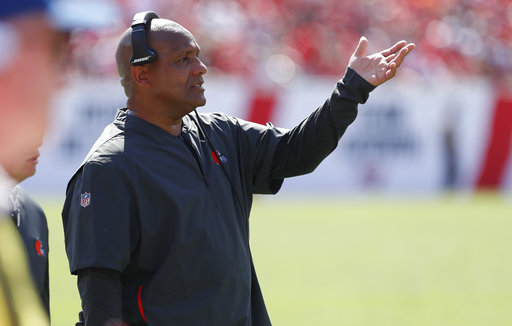 BEREA — Hue Jackson was calm. He was genial. He even offered to stick around and answer more questions — a rarity for his news conferences.

Jackson was noticeably measured Monday, less than 24 hours after a tense and emotional interview session following a 26-23 overtime loss at Tampa Bay. His vow to assume a larger role in the offense — after the latest excruciating defeat and at the expense of veteran coordinator Todd Haley — sparked the discussion that he wasn’t taking accountability while maneuvering to keep his job.

“Added pressure? I’ve always had added pressure to win now,” he said Monday, laughing. “Everything we’ve tried to do is win now. But I don’t feel any other pressure that, ‘Boy, Hue, you better win or else.’ I’ve never felt that since I’ve been here.

“I’m trying to do the best job that I can with the staff, with the players and we’ve got to find a way to win some games. That’s just the nature of the business.”

Owners Jimmy and Dee Haslam retained Jackson despite the 1-31 record through two years — the worst span in NFL history — and have been supportive throughout. General manager John Dorsey was hired in December and got on board.

Jackson was asked if he still feels the Haslams and Dorsey have his back.

The source of his confidence?

Jackson said he talked with Haley on Monday and Haley will remain the play caller. Jackson will study what can be improved and “infuse” himself to help the staff.

“Me and him will walk through that and see what it looks like, he’s very open to it,” Jackson said. “He didn’t say, ‘No, you can’t do that’ or anything like that.”

Jackson admitted he spoke out of frustration after the game. He’s particularly bothered by the poor starts — the Browns have six offensive points and no touchdowns in the first quarter this season — and the inability to finish victories in overtime. The Browns have scored three points in nearly four complete overtime periods.

“It wasn’t in harshness of the staff,” he said. “It’s in harshness, of ‘God, I want to win’ and I want to do whatever it’s going to take to help our football team win.’”

Jackson objected to the perception he was passing the buck for the loss.

“All of this falls squarely on me, so if it’s going to fall squarely on me, if I can help, I don’t care if it’s offense, defense or special teams,” he said. “I have to continue to do what I do as a head coach, and what you’ve seen is something I’m very passionate about, which is offensive football. We haven’t been able to do much in the starting blocks, and I want to see if I can help.”

Jackson made his reputation as an offensive mind, serving as a coordinator with four NFL teams before getting hired by the Browns. He tried the dual roles of head coach and coordinator/play caller in 2016 and ’17, then hired Haley in the offseason after the Steelers didn’t renew his contract and ceded control.

Jackson sat in offensive meetings throughout the first seven weeks but was mostly a spectator. His voice will be louder moving forward.

“Everybody sometimes have their own blind spots. Not saying that Todd does, but I’m sure another good set of eyes on certain things might help,” he said. “I still think two heads are better than one in certain situations. Obviously somebody’s got to lead it and that’s Todd’s job, but at the same time, if I see something where I can help and help us be a little better, I think that’s my job.”

Jackson has seen Haley’s scripts of the early plays and doesn’t think they’re the problem in the slow starts.

“Our execution, our ability to finish plays, our inability to get chunk plays in the first half leads to us not having opportunities to score,” he said. “Obviously the guy’s been extremely good in what he’s done. His reputation precedes him and I think he’s doing some things extremely well here right now.

“We just have to get the offense moving where he wants it and where I want it as we continue to move forward so we’re playing all four quarters and maybe not 2½.”

Three of the losses have been by three points each, and the Browns had chances to win them all. That’s progress from the 1-15, 0-16 seasons, but with upcoming games at Pittsburgh (3-2-1) and home against Kansas City (6-1) and Atlanta (2-4 before Monday night), Jackson could be staring at a five-game losing streak heading into the bye.

“We’re not frustrated to a point of fracture,” center JC Tretter said. “We’re frustrated because we’re not winning and we expect to win and the amount of preparation, the amount of work we put in, we feel that and we want to win. So when we don’t get that outcome that we feel like we deserve, it’s frustrating. But it’s not to a point where we’re turning on each other or turning on the coaches.”

Tight end David Njoku said the players are “110 percent” behind Jackson and his staff.

“We are not really affected by the outside noise,” he said.

Jackson is determined to make sure that’s the case.

“I told our team everyone needs to stay together, keep grinding and working at it,” he said. “We are not going to get sidetracked or distracted by anything. We can’t get discouraged.

“One thing I know about our guys is we will fight. The team never quits.”

Hue Jackson vows to get more involved with sputtering offense after mistakes doom Browns in another heartbreaking loss
Baker Mayfield takes no satisfaction in likely fine for Bucs safety Jordan Whitehead, had “no words” when heard ref’s explanation for no penalty on helmet-to-helmet hit