Notes: Rookie Nick Chubb was stunned by trade of Carlos Hyde but filled in nicely in 1st start 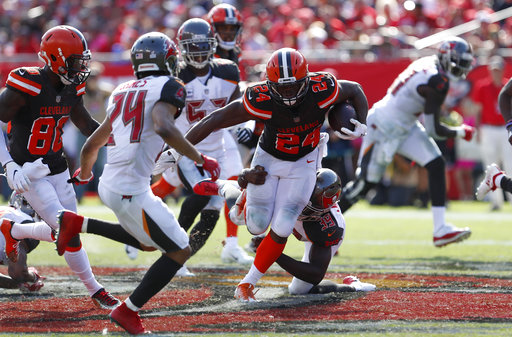 BEREA — Rookie Nick Chubb got a text from one of his coaches at Georgia but dismissed it. Then his phone started to blow up.

He was “long gone” from Browns headquarters Friday afternoon when news of Carlos Hyde being traded to the Jaguars broke.

It was news to Chubb, the man who was about to replace Hyde as the starting running back.

“It was a shock to me. It was a shock to everyone here,” he said Monday. “We had no idea it was happening. I was enjoying playing with him and learning from him, and he taught me so much in just the time we were here. But it is what it is. Gotta keep moving forward.”


General manager John Dorsey made the deal, and coach Hue Jackson said he “absolutely” was consulted.

“This is an organizational decision that we made,” Jackson said. “Me and John talked about it, talked it through, every avenue you can talk through it, and made a decision that it was best for the organization.”

Chubb had been limited to 16 carries through six games but had gained 173 yards for a 10.8 average with touchdowns of 63 and 41 yards. Coordinator Todd Haley stuck with Hyde as the feature back and struggled to get touches for Chubb and Duke Johnson.

The trade cleared a path.

“I’m not going to say that was the easiest way. I’m sure it looked like that,” Jackson said. “Obviously if you take one player from the equation, the next guy’s going to get more carries.

“I think there’s all kind of ways to do it. But the bottom line, it wasn’t done. I know everybody’s going to look at it that way, but I don’t look at it like that.”

Chubb, the No. 35 pick, stepped into the workhorse role Sunday and carried 18 times for 80 yards, including a 1-yard touchdown, in the 26-23 overtime loss to the Tampa Bay Buccaneers. For the season, he has 34 carries for 253 yards, a 7.4 average and three touchdowns.

“It felt great going out there, getting comfortable with the team, getting things going,” he said. “You never know when it happens, so you’ve got to be ready.”

Hyde practiced all week as the starter, so the Friday trade was a jolt to the team.

“Those aren’t easy. I’ll be the first to tell you that,” Jackson said. “You know how some of these things go, it’s take it or leave it. And we felt very good about the situation we were in.

Quarterback Baker Mayfield was 23-for 34 (68 percent) for 215 yards with two touchdowns, no interceptions, a fumble and a 104.4 rating. It was a strong rebound from his worst game in a 38-14 loss to the Chargers.

“The game for him really started improving as it went on,” Jackson said. “He made some unbelievable throws in the second half to put us in position to get to overtime and win the game.”

Mayfield was sacked five times for the third straight game, but Jackson saw improvement in his pocket presence.

“In the first half, I didn’t feel like he was holding the ball as much for the sacks,” he said. “I think some of them were physical where we were getting beat in some situations and we need to continue to clean those things up fundamentally. I think there’s another time he could’ve got the ball out maybe a little bit sooner or feel the pressure, but I thought he improved last week to this week. I thought that was huge.”

NO RHYME OR REASON

The Browns were still trying to figure out why referee Shawn Hochuli picked up the flag and waved off an unnecessary roughness penalty after Bucs safety Jordan Whitehead hit Mayfield helmet to helmet at the end of a scramble. Hochuli said there was no penalty because Mayfield started his slide late and was just a runner. The explanation is inconsistent with the rule that outlaws leading with the helmet.

“We’ve had quite a few conversations,” Jackson said, referring to Al Riveron, the league’s head of officiating. “That was disappointing. That’s all I can say.”

Center JC Tretter expected the Browns to receive clarification, and possibly an apology, from the league.

“Because even if he’s a runner, that play’s been pretty much taken out of the game this year,” he said.

“That says a lot about, one, how he feels about his teammates and how much the game is important to him,” Jackson said. “I commended him on that.”

Tretter’s left foot was back in a walking boot Monday.

“It was tough,” he said. “It was sore, but it was what we expected. Going in, we knew it was going to be a battle. Obviously, the extra 10 minutes make it a bigger battle, but I was confident once I got started, I knew I was going to be able to finish it.”

He won’t practice much but expects to keep playing on Sundays.

“We understand that until it gets healed up, it is going to be sore, but I plan on continuing to play and try to play at a high level,” he said.

Cornerback E.J. Gaines remained in concussion protocol, according to Jackson, who said it was too early in the week for an update on sidelined receiver Rashard Higgins (knee) and middle linebacker Joe Schobert (hamstring).

** Chubb gave Mayfield a shove from behind on a failed fourth-down sneak from the 1-yard line in the fourth quarter.

“I think he had a couple guys in front of him because he wasn’t going anywhere,” he said. “I was pushing with all I could, with all I had.”

Notes: Browns trade RB Carlos Hyde to Jaguars for 5th-round pick, clearing way for rookie Nick Chubb
Notes: Duke Johnson not surprised “at all” by lack of touches against Bucs despite trade of Carlos Hyde