Baker Mayfield on Hue Jackson getting more involved in the offense: We do not need to reinvent the wheel 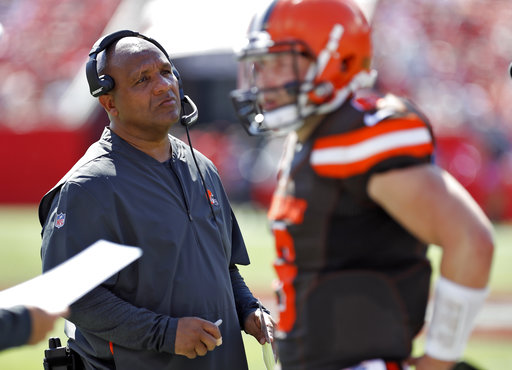 BEREA — Baker Mayfield isn’t looking for coach Hue Jackson to ride to the rescue and save the offense.

“I think a lot of things are said postgame emotionally, but I think the thing around here is we do not need to reinvent the wheel,” Mayfield said Wednesday. “We need to perfect our craft. You look at the good teams around the league, they work hard at what they do and they become very, very good at it.

“We have what we have. We do not need to try to change too much. We just need to get better at what we are doing. There is not a secret recipe for success, besides working your asses off with what you have.”

Jackson created a stir Sunday after the 26-23 overtime loss to the Buccaneers when he said he’d become more involved in the offense. He admitted Wednesday he was “fuming after losing,” was much calmer Monday and Wednesday and said coordinator Todd Haley will continue to call the plays.


“I have total confidence in Todd and what the staff is doing,” Jackson said. “I had a chance to sit back and see it all. I just wanted to make sure that as an offense we were crossing the t’s and dotting the i’s, and making sure that everything is moving in the right direction.”

Left guard Joel Bitonio said Jackson’s role in offensive meetings this week hasn’t changed from the rest of the season.

“He’s the head coach, so he’s trying to get his team to win,” Bitonio said. “He’s trying to help any way he can. If he sees anything, I’m sure he’ll talk to Todd, but the meetings this week have been the same as usual.”

Jackson said he’s done “everything that I normally do.”

“I just have been being me,” he said. “Just looking at things and getting a real good feel for how we are doing things. Hey, we are moving in a great direction. We have done some really good things, getting better. Just have to continue to grind on the little things as we continue to move forward.”

Jackson was the coordinator the previous two years. The Browns were last in the league in 2017 with 14.6 points a game. After seven games under Haley, they’re tied for 23rd with 21.6.

Haley spent the previous six years as coordinator with the Steelers and reportedly butted heads with quarterback Ben Roethlisberger. On his weekly appearance on 93.7 The Fan in Pittsburgh on Tuesday, Roethlisberger was asked about Jackson saying he’ll get more involved.

“Well, I can’t imagine that Coach Todd was too happy with all that talk, and I don’t know what he’s going to say to Coach Jackson or his players or things like that,” he said.

“Todd is a very prideful man,” he said. “He takes pride in what he does and whatever happens happens.”

The offense’s struggles are most obvious in the first quarter and overtime — of which the Browns have played four.

“We need to speed up in the first half. That is the motto right now,” Mayfield said. “Have to eliminate the minus plays. If we do our job, we will eliminate those things and we will be in a much better position to take points and any points are good points.

“Field awareness, we have to score when we have a chance. We have to do that and be proud to do that.”

Mayfield, the No. 1 pick in April, was 10-for-16 passing for 62 yards in the first half against Tampa Bay as the offense totaled 74 yards. He went 13-for-18 for 153 yards and two touchdowns after halftime, as the Browns totaled 231 yards.

He said he’s comfortable with Haley’s script of plays to begin games.

“Oh, absolutely,” he said. “They give me full freedom to say if I do not like to something. I have liked it. Now it just comes down to us doing our job.”

The points have also been hard to come by in overtime, with only three on the way to a 1-2-1 record.

“What it comes down to is doing little things right,” Mayfield said. “So early on in the game when emotions are high, you gotta settle in quickly and do your job and then late in the game, when it really matters, you don’t have to do too much and you just gotta do your job.”

Mayfield is 1-2 in overtime games, with the only points the winning field goal against the Ravens. He had two extra possessions against the Buccaneers, but the promising drive ended after he was sacked for a 7-yard loss on third-and-8 from the Tampa 38.

He cherishes the chance to have a walk-off winner.

“It’s like in basketball, you want the ball in your hands for the last shot,” he said. “And anything like that is a great opportunity for a quarterback.”