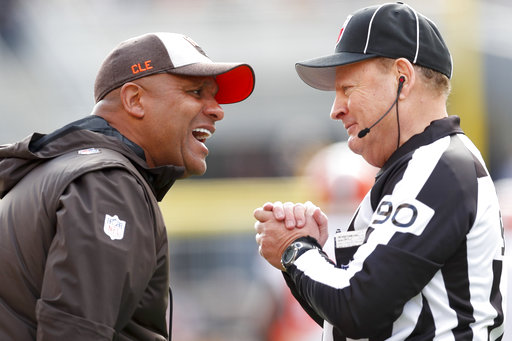 With the offense needing a strong performance to ease tension within the Browns coaching staff, it broke down after a decent start.

Jackson tried to quiet the storm when asked about the report.

“No. I don’t want to talk about or give legs to anything about last week,” he said after the Browns’ 15th straight loss at Heinz Field. “I said what I said out of frustration. That’s over and done with. Let’s go watch the tape and see how we can get better.”

Jackson started the controversy with his postgame remarks after a 26-23 overtime loss at Tampa Bay last week. He vowed to get more involved to help an offense that had been struggling for too long.

Jackson walked back the comments throughout the week and didn’t increase his role, as Haley remained the play caller and in control of the offense.

“There’s nothing wrong with my relationship with Haley,” Jackson said Sunday.

“Guys, I said what I said last week, and obviously it had legs, but I never said I wanted to take away play calling,” said Jackson, who hired Haley in the offseason. “I said I wanted to help. That’s it.

“So today, now all of the sudden it’s this big ol’ thing because sure everyone’s going to look and say, what’s going on? The only thing that’s going on is we need to get better. We need to coach better.”

Mayfield and Haley attributed Jackson’s comments after the loss to the Buccaneers to him being emotional.

And Haley appeared to take a shot at his boss.

“Coaching in the NFL, especially being in that spot, is not for everyone,” Haley said Thursday. “It is a high-pressure, high-stress job, and we’ve just got to keep doing what we know is right.”

The Browns have lost three straight to fall to 2-5-1. Jackson is 3-36-1 in three years with the Browns, and his job security would appear to be dwindling. He might be tempted to take back control of the offense in an attempt to go down swinging.

Jackson made his name in the league as a coordinator and held the position the last two years, as the Browns went 1-31.

“We had a good game plan, came out hot,” he said. “We’ve just got to score touchdowns.”

He sidestepped the question when asked if he senses dysfunction or a battle between Jackson and Haley.

Some of the players said they were unaware of the report, and everyone tried to downplay it.

“All I know is we lost today,” said Landry, who had eight catches for 39 yards, a 4.9 average. “Those are not my decisions. Those are not something that I’m wasting my energy on or my time. I just want to win games.”

He was asked if he still has confidence in the staff.

“Yeah, I have confidence in everybody. The talent’s here,” he said.

Linebacker Christian Kirksey has been through 58 losses, one coaching change and plenty of rumors in his 4½ years.

“I respect and I love the coaches that are here,” he said. “Whatever happens happens.”

He said despite the three-game losing streak, this team is different than the ones that went 1-15 and 0-16 the previous two years.

“Yeah, for sure. For sure,” he said. “This team’s got fight and we’re going to keep fighting and just see what we can do.”

The game got away from the Browns in the fourth quarter as Steelers running back James Conner piled up the yards on his way to 212 from scrimmage, but Jackson said effort wasn’t the problem.

“Our team plays as hard as they can,” he said. “Our team is giving me everything they have.

“Do I think we get frustrated at the end? Heck, yeah. These guys are trying to do everything they can to win. That’s just where we are.”