Jimmy Haslam on firing of coach Hue Jackson, OC Todd Haley: We’re not going to put up with internal discord 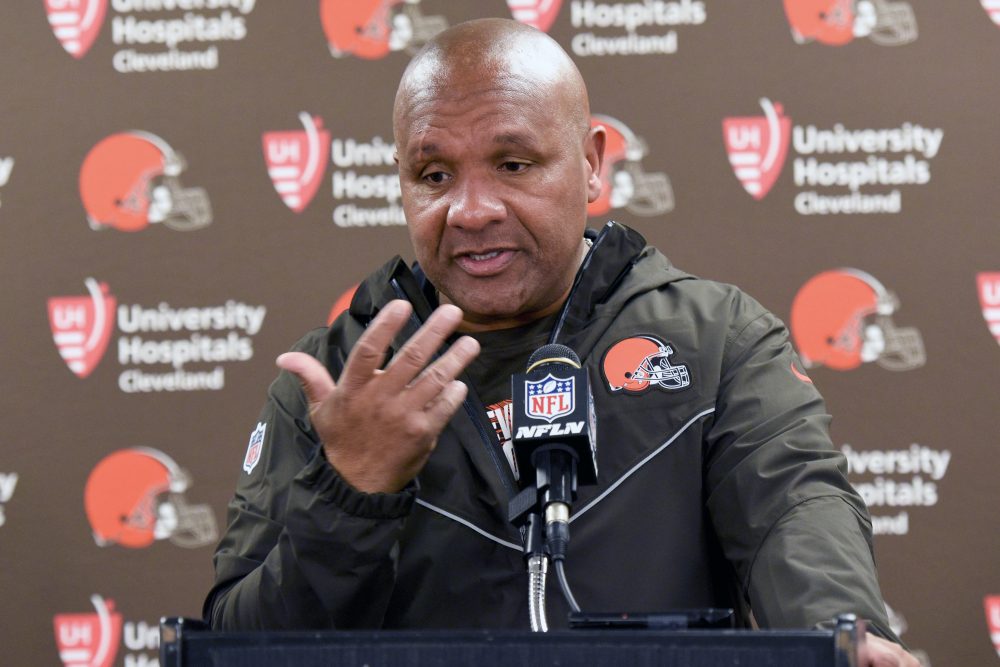 BEREA — As the losses began to mount again, after a brief respite, the dysfunction intensified inside Browns headquarters.

Fighting to keep his job against all odds, coach Hue Jackson’s clashes with offensive coordinator Todd Haley became increasingly public and the environment inside the building more polluted. The 33-18 beatdown by the Steelers on Sunday was the final piece of evidence in the case against Jackson.

He was fired a day after Cavaliers coach Tyronn Lue.


Jackson’s 3-36-1 record — the worst 40-game span for a coach in the Super Bowl era — was a huge factor in the decision but it wasn’t the tipping point. The relationship between Jackson and Haley had dissolved to a level that someone had to go.

The Haslams and general manager John Dorsey determined that someone was someones. Haley was fired a little more than an hour after Jackson.

The Haslams have changed presidents, general managers, coaches and coaching staffs, yet the dysfunction lingered and led to another seismic organizational shift.

“It’s hard to win in the NFL, if anybody knows that, it’s us. And I think the message today is we’re not going to put up with internal discord. That we want people who are collaborative and work together.”

Defensive coordinator Gregg Williams, 60, was named interim coach and will remain in charge of the defense. He was head coach of the Buffalo Bills from 2001-03, going 17-31, and is best known for his leading role in the Saints’ bounty scandal that earned him a suspension from the league for the 2012 season.

Haslam said he’d be a candidate for the full-time position if interested. Williams is scheduled to talk Wednesday for the first time in his new role.

Associate head coach/running backs coach Freddie Kitchens will take over as offensive coordinator for the first time in his career.

“What we’re attempting to do here now is create the best environment moving forward, not only for the players but for the coaching staff,” Dorsey said.

The Browns have lost three straight after a promising start to drop to 2-5-1. Haslam and Dorsey refused to talk about the seemingly inevitable coaching search that should begin immediately, choosing to keep the focus on the final eight games.

The Browns have lost three straight after a promising start to drop to 2-5-1. Haslam and Dorsey refused to talk about the seemingly inevitable coaching search that should begin immediately, choosing to keep the focus on the final eight games.

“This it not a throwing in of the towel,” Haslam said, relaying his message to the players in a team meeting. “It’s a rebooting, if you will, an opportunity to get them a fresh start to these last eight games.”

Despite their wishes, the rest of the schedule, which begins Sunday with a visit from the 7-1 Chiefs, takes a backseat to the ouster of Jackson and Haley and the anticipation of who will replace them for 2019 and beyond as the ninth coach since the franchise returned in 1999. Oklahoma’s Lincoln Riley, who coached quarterback Baker Mayfield, leads the list of potential candidates.

Jackson is the only coach under the Haslams — Pat Shurmur, Rob Chudzinski and Mike Pettine — to make it to a third season, and he did so despite the second 0-16 season in NFL history in 2017. The Browns are 22-81-1 since the Haslams agreed to buy the team before the 2012 season, and the turnover has been the only constant.

“I’ll accept the blame, because ultimately it’s the person at the head of the ship, so I’ll take the blame as ownership,” Haslam said. “I can’t explain it more than that. We’ve had different situations, different people, I know it’s something we’re not going to tolerate going forward.”

Tension had existed for months between Jackson and Haley and escalated over the last couple of weeks. Neither survived, and Jackson exited 1-0-1 in power struggles. Head of football operations Sashi Brown was ousted last year after Jackson convinced the Haslams talent acquisition was the problem for the record number of losses.

Haley lasted only eight games in Cleveland. Jackson’s tenure was longer and much more painful before he became the sixth straight Browns coach fired following a loss to the Steelers. The others came after the season finale.

The Haslams stunningly stuck with Jackson despite the 1-31 record in his first two seasons — the worst span in NFL history — and the hiring of Dorsey in December to replace Brown. The Browns will be a year behind in finding a successor, but Haslam said he didn’t regret bringing back Jackson.

“Nah, you know, hindsight’s always 20-20,” he said. “I like and respect Hue. You want to give him every chance you could to be successful.”

After a solid start this season and three close defeats, the Browns have dropped three straight to fall out of contention. Jackson went 0-20 on the road, but his failure was about more than losses or a jump into Lake Erie.

He contradicted himself in the media and his leadership skills were questionable. His staff hires were largely a bust, as he fired defensive coordinator Ray Horton after one season and only three members of the staff made it to the third year. And he couldn’t handle the dual role of coach and offensive coordinator his first two years, which led to the addition of Haley in the offseason.

It was a bad fit from the start, which quickly became obvious. Haley questioned Jackson’s training camp routine of resting players, then started receiver Josh Gordon in Week 1 despite Jackson repeatedly saying that wouldn’t happen.

Then came the beginning of the end when Jackson criticized the offense’s performance over a number of games after the 26-23 overtime loss to Tampa Bay and said he’d become more involved. Haley denied the comments bothered him but took a shot at Jackson while attributing the remarks to the emotions felt after a difficult loss.

“This is an emotional game. It is not for everyone,” Haley said Thursday.

After the loss to the Steelers, Jackson dismissed the notion he was considering firing Haley.

Haslam said the decision to fire both didn’t come down to a battle for control of the offense.

“We made the decision to move on, and it was far bigger than who was going to call plays,” he said. “Unfortunately sometimes the best plans don’t work out, and in this case they didn’t. We were optimistic and hopeful that they would, but they didn’t work out.”

Oklahoma’s Lincoln Riley on coaching in the NFL: I certainly don’t have that itch right now
No trade for Browns before deadline