No trade for Browns before deadline 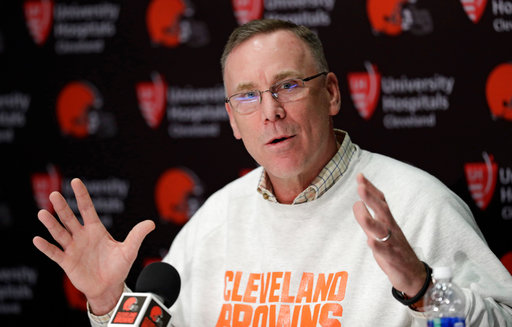 The NFL’s trade deadline came and went Tuesday afternoon without the Browns pulling off a deal.

General manager John Dorsey said he’d “turn over every rock” in hopes of improving the roster but couldn’t find the right trade.

He made 14 for the year, starting on the first day of the league year in March with the acquisitions of quarterback Tyrod Taylor, receiver Jarvis Landry and defensive back Damarious Randall and ending Oct. 19 when he shipped starting running back Carlos Hyde to the Jaguars for a fifth-round pick in the 2019 draft. He also sent receiver Josh Gordon and a seventh-round pick to the Patriots on Sept. 17 for a fifth-round pick.

The Browns hung onto Taylor and linebacker Jamie Collins on Tuesday after their names had been mentioned in potential deals. They also failed to add a receiver, a spot decimated by injury.

And it looks like kicker Greg Joseph will hang onto his job for at least another week, as the team didn’t sign a replacement. He missed a field goal and extra point Sunday in the 33-18 loss at Pittsburgh.

Dorsey, who inherited a rebuilding project when he was hired in December, has tried to balance compiling the best roster to compete this season with acquiring assets for the future. He brought in 34 of the 53 players on the active roster this season and was adamant Monday his focus for the final eight games is winning.

“We have some very talented players on this team right now, as we speak,” he said. “As we sat down and talked to the players today, I expressed that to them. I said, ‘You know what, we have a lot of football left here, you guys.’ And they understand that.”