Baker Mayfield calls firings his “welcome to the business” moment 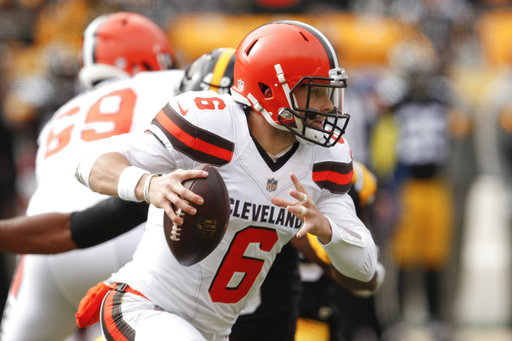 BEREA — Baker Mayfield has been a member of the Browns for only six months. He hasn’t lived through the trauma of front offices and coaching staffs being replaced every year or two. He doesn’t know the depth of the dysfunction and instability seemingly inherent in the franchise.

So he didn’t feel qualified to call the Monday firings of coach Hue Jackson and offensive coordinator Todd Haley his “welcome to Cleveland” moment. But he acknowledged the monumental moves eight games into his career knocked him for a loop.

“It’s surprising on all fronts,” Mayfield said Wednesday. “I’ve never gone through it like that and that’s my ‘welcome to the business’ moment, I think.”

With the organization in turmoil and owner Jimmy Haslam admitting “internal discord” was the reason for the firings, someone needs to step up and lead. The quarterback and No. 1 pick is the preferred candidate.

“Bring it on,” Mayfield said.

He said the players had a choice whether to handle the upheaval as a distraction and use it as an excuse or come together as a team.

“This locker room can become a lot tighter,” he said. “We’ll see what kind of men we have in this room. Not what team we have but what kind of men can handle a distraction the right way, can come together and focus on doing their job and doing it at a high level against a great team come Sunday.”

The Browns (2-5-1) host the Chiefs (7-1) and quarterbacking sensation Patrick Mahomes as they try to snap a three-game losing streak. Not only had Mayfield never lost three in a row, he’s also dealing with personal struggles. He ranks 31st with a 58.3 completion percentage, 31st with an average gain of 6.6 yards per attempt and 29th with a 78.9 passer rating.

General manager John Dorsey said Monday that Mayfield isn’t the type of guy to lose his swagger, and Mayfield insisted he’s as confident as ever.

“He’s a confident cat,” left guard Joel Bitonio said. “He’s going to come out and he’s going to be ready to play.”

“We’ll continue to go back to the drawing board and he won’t waver with who he is. That’s a testament to him and also the people around here who need to rally behind him.”

Mayfield didn’t try to hide his shock at having his world rocked after five NFL starts.

“For me, it’s definitely something new,” he said of the firings. “It caught me off guard, but gotta roll with the punches.”

Mayfield seemed to take Haley’s side in the public battle over Jackson’s vow to increase his involvement in the offense, and didn’t deny the rift that led to their dismissals.

“I tried not to see anything else besides doing my job,” said Mayfield, who blamed mistakes by the players, not the discord, for the losses. “Whether there was or not, I don’t stick my head in that stuff. I stick to doing my job and being around these guys and trying to improve every day.”

His development is a primary focus of the season, and losing his offensive-minded coach and play-calling coordinator will be a significant adjustment. Freddie Kitchens moved from associate head coach/running backs coach to coordinator and will call plays in the regular season for the first time.

“You have to be able to adapt in this league,” Stanton said of Mayfield. “He’s getting a crash course on that, but he’s going to handle it in stride.”

Mayfield went through a coaching change before his senior season at Oklahoma, as Bob Stoops retired. But Lincoln Riley got the job after being his coordinator and quarterbacks coach for two years, so the transition was smooth.

Ken Zampese remains the quarterbacks coach, which will help, but Kitchens is more of an unknown.

“I haven’t had to work directly with him,” Mayfield said. “It’s a great relationship, he’s very honest and he’s upfront about a lot.”

With the locker room looking for direction amid the commotion, Mayfield realizes all eyes will be on him.

“My leadership and my presence and making sure guys stay focused is more important now than ever,” he said.

Mahomes goes way back with Mayfield, who hosted him on his official visit to Texas Tech, and isn’t worried about the coaching disruption stopping him.

“You never want that, but I know Baker,” Mahomes said on a conference call. “I know how resilient he is, and I know that this will do nothing but make him better.

“He is going to keep going out there every single day and compete. That is one thing you will always get out of him is a competitor and someone that is going to go out there and try to win football games.”

The final adjustment is to defensive coordinator Gregg Williams as interim coach. He’s a lot louder and fiery than Jackson, which might be a better match for Mayfield’s personality.

Williams’ catchphrase is “come get some,” and said his “very good” relationship with Mayfield started during his predraft visit.

“He came straight to my office and gave me a ‘come get some” lecture,’” Williams said. “About not being afraid to compete and how he was going to be. That’s how your quarterback should be.”